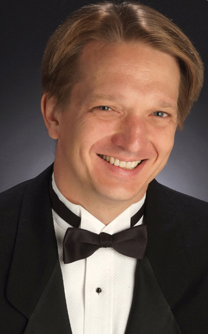 Pollock is an international conductor, now in his second year with the Toledo Symphony where he crafts all of the orchestra’s 50-plus community concerts, pops offerings and family events. He has worked with orchestras all across North America and with headliners such as Roberta Flack, Randy Newman and Winona Judd.

In addition to his BGSU position, Moss since 1980 has been music director of the Wheaton Municipal Band in Illinois, a professional summer ensemble regarded as one of the finest of its kind in the nation. It was recently featured in the WGBH-TV Public Broadcasting Service’s American Experience documentary “If You Knew Sousa.” His many years of public school teaching were honored when he served as co-conductor of the Chicago Symphony Orchestra, with Leonard Slatkin, in a special work featuring his high school students.

Ticket prices range from $12 to $30, with group tickets available. For tickets, call the College of Musical Arts Box Office at 419-372-8171, or email musictickets@bgsu.edu.