Flute and percussion duo Due East to perform at BG 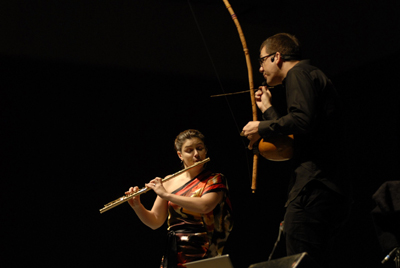 Both concerts begin at 8 p.m. The Clazel is at 127 N. Main St. in downtown Bowling Green.  The suggested donation for the Nov. 29 performance is $2-5. The BGSU concert on Nov. 30 is free and open to the public.

Part of the Music at the Forefront concert series, the concerts are sponsored by the MidAmerican Center for Contemporary Music at BGSU.

The duo is made up of Erin Lesser, on flutes, and Greg Beyer, on percussion. Their programs include compositions by Michel Galante, Jeff Herriott, Bernhard Lang and others, including multimedia works with video by John Supko and Beyer. Many of the works performed will feature the berimbau, a stringed Brazilian percussion instrument rarely found in contemporary classical music.

Due East actively promotes new music and seeks to expand the flute and percussion duo genre through frequent commissions and premieres. Lesser and Beyer have performed in China, Brazil, Europe, Canada and the U.S. at venues such as the Beijing Modern Music Festival, the Warsaw Crossdrumming Festival, the Banff Centre for the Arts and the SEAMUS conference. Due East won first prize in the 2008 National Flute Association Chamber Music Competition. Their first recording, “Simultaneous Worlds,” is available on Albany Records and, in November 2011, New Amsterdam Records will release “drawn only once,” a multimedia CD/DVD.

Due East has performed Alex Mincek’s “Double Concerto” with The Knights at Bargemusic in New York City, as well as with the Northern Illinois University New Music Ensemble.

Music at the Forefront is an annual concert series featuring performances by accomplished and innovative performers of contemporary music. For more information, contact the center at 419-372-2685 or email kdoles@bgsu.edu