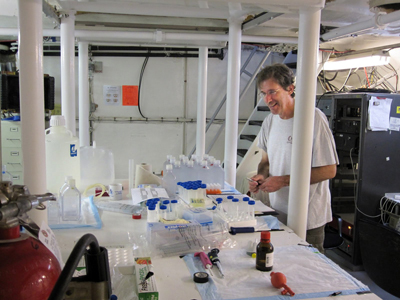 BOWLING GREEN, O.—A project by three Bowling Green State University biologists and a colleague is expected to unleash a virtual tsunami of information that will be usable for years to come not only by them but also by scientists worldwide studying greenhouse gases and lake ecosystems.

Drs. George Bullerjahn, Michael McKay and Paul Morris’s study of the Great Lakes and “dead zones” in Lake Erie was one of only 41 projects chosen for support this year by the U.S. Department of Energy’s Joint Genomic Institute (DOE JGI).

The institute will sequence both the DNA and RNA of microbial inhabitants of the central basin of Lake Erie — the spot where “dead zones,” or areas where there is no oxygen, typically occur seasonally.

“It’s a natural progression of the work we have been carrying on for several years,” said McKay, the Ryan Professor of Biology and director of the Marine Program at BGSU. “Genomic data will complement our ongoing National Science Foundation-funded research on nitrogen cycling in the Great Lakes as well as the monitoring of dissolved greenhouse gases in Lake Erie by our colleagues at Environment Canada.” Dr. Richard Bourbonierre of Environment Canada is the fourth member of the research team.

The new project will include data collected in the summer months, whereas the group had previously concentrated more on winter environments.

The BGSU team had several factors making its proposal competitive. The team can draw upon more than 30 years of data collected by the EPA and Environment Canada; it has in-kind support from Environment Canada, the U.S. Coast Guard and the National Oceanic and Atmospheric Administration (NOAA); and it has students trained in the analysis of genomes as part of another DOE JGI project Morris was involved in.

The work holds great promise for revealing answers to some of society’s environmental problems, from greenhouse gases to wastewater treatment, the proposal reviewers said. The economic impact is also significant. The Great Lakes, representing about 20 percent of the world’s fresh water, are a binational resource providing transit for the movement of goods, potable water, recreational opportunities and productive fisheries. The shipping industry generates $6.5 billion per year, the commercial and sport fishing industries generate $700 million a year, and tourism is a multibillion-dollar industry.

“These (proposal) selections truly take advantage of the DOE JGI’s massive-scale sequencing and data analysis capabilities,” said Eddy Rubin, DOE JGI director. “The projects span the globe and the unexplored branches of the tree of life, and promise to yield a better understanding of the interplay between climate, ecosystem and organism.”

The 2012 Community Sequencing Program call invited researchers to submit proposals for projects that advance capabilities in fields such as microbes involved in carbon capture and greenhouse gas emission, and metagenomics—the characterization of complex collections of microbes from particular environmental niches.

For the BGSU team, that niche includes the hypolimnion, or deepest layer of the water column at the bottom of the lake, which is not mixed by the wind and can produce significant amounts of greenhouse gases during low-oxygen periods caused by microbial nitrate sinks and other factors.

Bullerjahn, McKay and Morris’s new project will involve sampling at the site of a NOAA buoy that continuously monitors oxygen and temperature through the water column during summer and fall. They will also use samples taken from the hypolimnion and the lake sediments before and after the onset of low oxygen conditions in the central basin. The RNA and DNA sequencing of microbes from those samples should provide a trove of information.

“If you pull up a bucket of water, there are several thousands of organisms living in a community structure. We want to know who’s doing what,” said Bullerjahn, a professor of biology and interim associate dean of the Graduate College.

Using the genetic sequencing from the JGI, they will be able to identify what genes are active, and study the DNA as well in order to assess microbial community composition. “We can look at the oxic [oxygenated] periods versus the anoxic periods and see what genes are active. It can also lead to discoveries of new types of ‘players’ — organisms we never knew existed,” Bullerjahn added.

“One of the challenges that has held back environmental genomics has been the inability to sample adequately and assemble genomes from complex environments,” Rubin said.  “With recent advances in sequencing technologies and assembly algorithms developed by DOE JGI and others, it has become tractable.”

The word “community” applies to the work in several ways, from the community of microbes under study to the scientists involved. “A community of people will be needed to even begin to look at the data this will generate and begin to parcel out the interesting stories and put together their results,” Morris said.