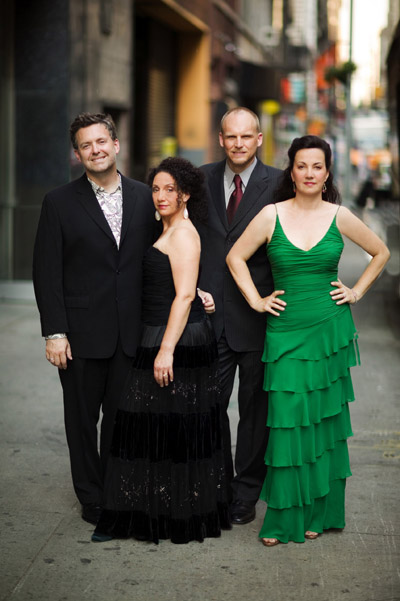 The group has traveled the globe with its elegant music, featuring impeccable voices and stunning arrangements. The foursome has appeared on the stages of Carnegie Hall, Lincoln Center, the Kennedy Center, The Blue Note, the Zurich Opera House and other prominent concert halls. They have also been seen at many jazz festivals, including the North Sea Jazz Festival, The Montreal Jazz Festival, and the New Orleans Jazz and Blues Heritage Festival.

Along with their extensive concert performances and recording dates, the group also works in the field of education, giving workshops and clinics to high school and college music students. They debuted the first New York Voices Vocal Jazz Camp in the summer of 2009, partnering with BGSU. The camp was attended by people from eight countries and of ages ranging from 13 to well into their 50s. The four singers all direct their own choir, while offering a wide array of classes during the six day intensive clinic.

Individually, the four members are involved in a variety of projects including solo performances, recordings, teaching, writing and arranging. The Cincinnati Enquirer reported, “The group’s incomparable blend, hip delivery and great arrangements resulted in one swinging party. Their four-part harmonizing was so close, it was hard to tell where one voice ended and the other began.”

Ticket prices range from $17 to $36. Group tickets are also available. Through the generous support of the Office of Student Affairs, BGSU students can receive free tickets to this concert by bringing a canned good to the Bowen-Thompson Student Union before Nov. 11.