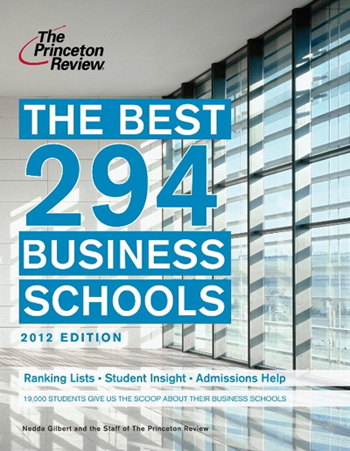 BOWLING GREEN, O.—Open the 2012 edition of The Princeton Review’s “Best 294 Business Schools” and you will find BGSU’s College of Business Administration listed among the top business schools in the nation. Only accredited business programs may be included in the list.

In addition, BGSU’s graduate program in business scores second in Ohio in the areas of academic experience — based on student surveys —and admissions selectivity. The University scored above 90 in both categories.

According to David Chatfield, director of the Graduate and Executive Programs in Business, “Our scores have been consistently strong since the ratings were first reported eight years ago and have secured BGSU`s standing as number two in Ohio, a position we believe serves our students very well.

“A key feature of BGSU’s Executive and Professional MBA programs is the requirement that all students have significant career experience prior to admission. Students share the classroom with other working professionals who have been in the workforce for years, and they come from diverse career backgrounds, adding to a richer learning environment. It greatly enhances the career relevance of our courses for our students.”

Also noted in the BGSU profile in the guidebook is the consensus among the students surveyed that the college’s MBA classes are “cutting-edge” and students receive “solid preparation in doing business in a global economy.”

BGSU has twice broken new ground in its master of business administration (MBA) course formats. Its weekend executive MBA program was the first such program in the state, and regularly attracts a dynamic and diverse group of students, Chatfield said. And the professional MBA classes BGSU has held since 2009 at the Levis Commons classroom in Perrysburg have filled up every semester.

“Our executive and professional MBA classes include an executive from Chicago and an army officer from Florida, several people with Ph.D.s, plus CPAs and a number of others in the financial field,” he said.

The Princeton Review does not rank the schools in the book on a single hierarchical list or name one business school best overall. Instead, the book has 11 lists ranking the top 10 business schools in various categories. Ten lists are based on the review's surveys over the past three years of 19,000 students attending the 290 business schools profiled in the book. One list, “Toughest to Get Into,” is based solely on institutional data.

Schools are selected based on the publication’s regard for their academic programs and offerings, institutional data it collects from the schools, and the candid opinions of students attending them who rate and report on their campus experiences at the schools.

The BGSU College of Business Administration first earned accreditation from AACSB International—the Association to Advance Collegiate Schools of Business— in 1954. Bowling Green is one of only 176 colleges worldwide to have earned AACSB accreditation in both business and accounting.