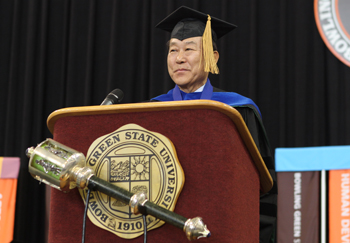 BOWLING GREEN, O.—A young man stands in the office of Pan American Airlines in Seoul, hoping to fly to Ohio. He has a scholarship to attend Bowling Green State University but no money for a plane ticket. Impressed with the man’s earnestness, the manager issues the ticket on credit and the young man agrees to repay the loan monthly.

This is the story of how Dr. Jong Pil Lee made it to BGSU in 1962. On Aug. 6, Lee served as the summer commencement speaker. He is also the recipient of the University’s 2011 Distinguished Alumnus Award. Lee received his master’s degree from BGSU in 1967 and a Ph.D. from the University of Alberta in Canada.

A teacher at the State University of New York College at Old Westbury, Lee has mentored thousands of students and teachers in mathematics and has been the recipient of numerous honors statewide.

Referred to as the “dictionary carrier” while at BGSU due to his poor English and his always-present reference book, Lee washed dishes, cleaned floors and tutored high school math teachers to earn money to send to his brothers and sisters back home. He did not see his family for 8 years.

“It amazes me to think about my remarkable American journey,” Lee told the graduates. “A story only possible here in America.”

He shared his three ingredients that made his dream possible.

“First, find good mentors and accept their generosity,” he explained. “When I first arrived at Bowling Green my adviser, Professor Elwood Bohn, and math department chairman Dr. Frank Ogg arranged a University loan for room and board for one semester.

“And finally, the third ingredient is to never give up.”

In 2005, he was one of 10 professors nationwide and one of only two mathematics professors to be honored at the White House with the U.S. Presidential Award for Excellence in Science, Mathematics and Engineering Mentoring, an award jointly administered by the White House and the National Science Foundation.