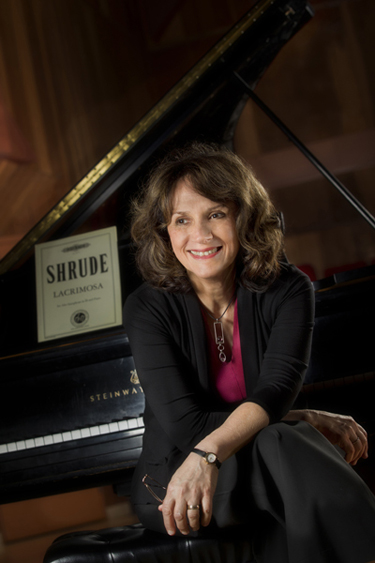 BOWLING GREEN, O.—This time next year, Distinguished Artist Professor Marilyn Shrude will likely not be thinking of class schedules or her duties as chair of the musicology/composition/theory department at Bowling Green State University. Instead, thanks to support from the John Simon Guggenheim Memorial Foundation, she expects to be deeply immersed in writing music.

Shrude has been named a 2011 Guggenheim Fellow. Designed to help nurture scholarship or creative activity, the prestigious awards are “intended for scholars or artists who have already demonstrated exceptional capacity for productive scholarship or exceptional creative ability in the arts,” according to the foundation.

Shrude holds a bachelor’s degree from Alverno College and a master’s degree and doctorate from Northwestern University.

Guggenheim Fellows are chosen through a rigorous and highly competitive application process that this year yielded 180 fellowships from about 3,000 applications.

“This is something people typically apply for many times. You don’t ever expect to receive this award but when you do, you feel incredibly honored and humbled,” Shrude said. Only about 10 fellows were chosen in the music composition category — not all in academia, and about half in jazz. Shrude’s fellow winners include composers from Juilliard, Harvard and New York University. “It’s nice to have Bowling Green State University represented among institutions like these,” she said.

The “planets aligned” for Shrude this time, she said. She had already planned to take a faculty improvement leave next year to write two commissioned compositions — a large chamber piece for the Brave New Works ensemble, for its 2012-13 concert series; and a trio for the fifth anniversary of the Walla Walla Chamber Music Festival in Washington state, to be performed in June 2012.

Being free of administrative and teaching duties “is a different mode of operation,” she said. “It lets my imaginative side come out.” Having the Guggenheim award in conjunction with her leave is especially helpful, Shrude said. “I feel so privileged to be able to have this time and the support of the colleagues who chose me for this award.”