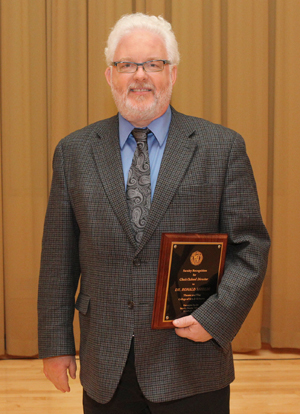 BOWLING GREEN, O.—As chair of Bowling Green State University’s Department of Theatre and Film, Dr. Ronald Shields has forged connections and collaborations with other arts-related departments on campus and beyond that have expanded students’ and faculty’s scholarship and creative endeavors.

Shields was honored by the Faculty Senate March 22 with the Chair/School Director Leadership Award, which includes a $1,000 cash prize and commemorative plaque. He received his Ph.D. from Louisiana State University and has been with Bowling Green State University since 1994.

Shields oversaw the shift of the department from theatre to theatre and film, “negotiating a strong vision for each while crafting a unified future for both,” Lockford wrote. His vigilant stewardship of limited resources and deft communication while serving undergraduate students in theatre and film, master’s and doctoral students in theatre, and the department’s theatre and film production areas have led to the doubling of majors, enhanced quality and competitiveness of the graduate programs and a significant increase in tenured faculty over the last decade. In addition, the department’s national and international reputations and diversity have been enhanced, she said.

Shields has been a central figure in numerous curricular developments and new programs. He helped develop the interdisciplinary Arts BG Experience course and was a collaborator on the creation of the Arts Village residential community and Arts Roundtable, which unites leaders in theatre, film, music, dance and visual arts at the University. He was also a supporter of the popular musical theatre specialization, which has attracted outstanding students to BGSU.

During the planning and construction of the University’s new Wolfe Center for the Arts, the department’s future home, Shields has interacted with administrators, donors, architects, faculty, theatre designers and construction firms. “No building detail escapes his eye,” Lockford said.

Shields is active on the national level with professional organizations and maintains a prominent national scholarly profile, with many professional awards.

Shields has “nurtured our department’s mission to cultivate our students as 21st-century scholar/artist/citizens through collaboration, creativity, communication and community,” Lockford said.