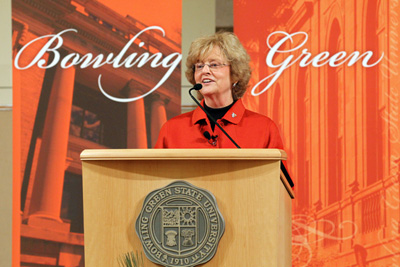 BOWLING GREEN, O.—Dr. Mary Ellen Mazey will be Bowling Green State University’s next president. The BGSU Board of Trustees voted Tuesday, March 22, to name her to the post.

Mazey is currently provost and vice president for academic affairs at Auburn University. She will succeed BGSU President Carol Cartwright, who will retire June 30.

“We’re extremely pleased to be able to bring a leader of Dr. Mazey’s caliber to Bowling Green State University,” said Col. John Moore, chair of the board of trustees. “Based on the recommendations of our search committee and the feedback of our students, faculty and staff, she is clearly the best fit for this University as we begin our second century.”

Mazey said she is gratified to be chosen to lead BGSU.

“Having spent a large part of my academic career in Ohio, I’m very familiar with both BGSU’s rich tradition and its potential,” she said. “This is a tremendous opportunity and an honor. I’m looking forward to working with our students, faculty, staff, alumni and friends to build BGSU’s future.”

According to William Primrose III, BGSU trustee and chair of the presidential search committee, Mazey’s understanding of the challenges facing higher education was key to her selection.

“BGSU and our peers across the state and across the country face some daunting issues,” Primrose said. “Dr. Mazey showed a tremendous grasp of the challenges we face. Just as importantly, she also understands the opportunities and how BGSU can succeed in higher education’s changing environment.”

Although helping BGSU navigate that shifting environment will be a priority, Mazey stressed that she won’t be starting from scratch.

“Dr. Cartwright and the BGSU community have already laid a strong foundation with the University’s strategic plan. The implementation of that plan will continue,” she said. “The first thing that I’ll be doing is listening. I have a lot to learn from the University community. Then, we can begin building partnerships – internally, in Ohio, and across the world – to strengthen the University and provide more opportunities for our students.”

Mazey will be BGSU’s 11th president. She has agreed to a five-year contract, and is expected to assume her new role July 1.

Mazey was appointed provost and vice president for academic affairs at Auburn in February of 2009. In that position she oversees the academic programming for 12 colleges and is responsible for the advancement of the university’s strategic plan. In total, 25 academic support units and colleges, with operating budgets of $289 million, report directly to her.

From 2005 to 2009 she was the dean of the Eberly College of Arts and Sciences at West Virginia University (WVU).

Prior to her appointment at WVU, she served as Dean of the College of Liberal Arts at Wright State University. Mazey joined the faculty there in 1979 and was founding director of the Center for Urban and Public Affairs for 11 years. At Wright State she also served as chair of the Department of Urban Affairs and Geography and led the creation of a Master of Urban Administration Program.

In 1996 and 1997, Mazey was the appointed director of the Office of University Partnerships for the U.S. Department of Housing and Urban Development, where she oversaw $25 million of grant programs to colleges and universities across the country.

Mazey has co-authored a monograph, published numerous articles, book chapters and conference proceedings, and has over $500,000 in grants and contracts to her credit.

In 2010 she was nominated and elected to the Association of Public and Land-grant Universities’ Council on Academic Affairs Executive Committee.

Mazey earned bachelor and master degrees from WVU and a doctoral degree from the University of Cincinnati.