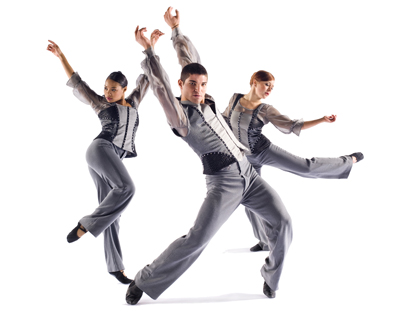 River North Chicago Dance Company is dedicated to the creative advancement, presentation and preservation of jazz-based contemporary dance regionally, nationally and internationally. Founded in 1989 by four visionary dancers/choreographers, River North Dance Chicago has established itself as one of Chicago’s leading dance companies and one of the most popular national repertoire companies, receiving critical acclaim in the U.S. and abroad. Elements of River North include highly skilled and emotive dancers, stimulating music and bold, commanding choreography.

In honor of the company’s 20th anniversary, Co-Artistic Director Emerita Sherry Zunker returned to River North to re-envision the group’s classic signature piece, “Reality of a Dreamer,” which premiered in 1992. Set to the track “Sweet Dreams,” written by Annie Lennox and David Allan Stewart, this rendition celebrates who the company is today and looks toward dreams yet to be realized.

“Beat,” a structured improvisation shaped by Ashley Roland, is dedicated to the memory of Jane Beber Abramson, a supporter of the company. Evan Solot composed the original music.

“Simply Miles” is a world premiere choreographed by Frank Chaves, to music composed and performed by Miles Davis.

River North Dance Chicago has toured extensively in Illinois and throughout the U.S. In 2008, it embarked on its first European tour to Germany, Luxembourg and Switzerland. A return tour of the U.S. is planned for this fall.  The company was recently selected as the touring company for the 2010–11 Doris Duke Foundation-funded “Building a Network of New Dance Presenters,” a collaborative project of DANCECleveland, Dance Affiliates of Philadelphia and Dance St. Louis, and was just awarded a national touring grant from the New England Foundation for the Arts.