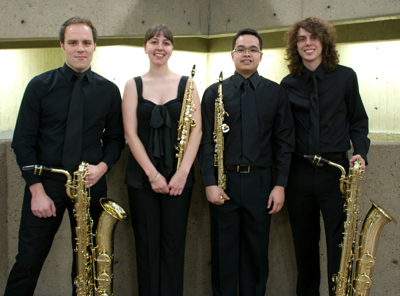 BOWLING GREEN, O.—The Anubis Saxophone Quartet, an ensemble of four Bowling Green State University alumni, will perform a concert of new works at 8 p.m. Feb. 7 in Bryan Recital Hall at BGSU’s Moore Musical Arts Center. Part of the Music at the Forefront concert series, the performance is sponsored by the MidAmerican Center for Contemporary Music and is free and open to the public.

The program includes the American premieres of works by composers Giorgio Netti and Ben Hjertmann and a new work by BGSU faculty composer Mikel Kuehn.

Quartet members Allison Balcetis, Ryan Muncy, Sean Patayanikorn and David Wegehaupt are committed to the creation, progression and performance of new music. Formed in 2007, the group is establishing itself as one of North America’s major contemporary saxophone ensembles and has performed internationally. The quartet was the collaborating ensemble for Random Access Music, a New York-based composers’ collective, and presented a concert of five world premieres in New York City in May 2010. Anubis has commissioned and premiered works by living composers including Thierry Alla, Philippe Laval, Mikel Kuehn, Claudio Gabriele and Vincent Bouchot.

Music at the Forefront is an annual concert series featuring performances by accomplished and innovative performers of contemporary music. For more information, contact the center at 419-372-2685 or e-mail kdoles@bgsu.edu.