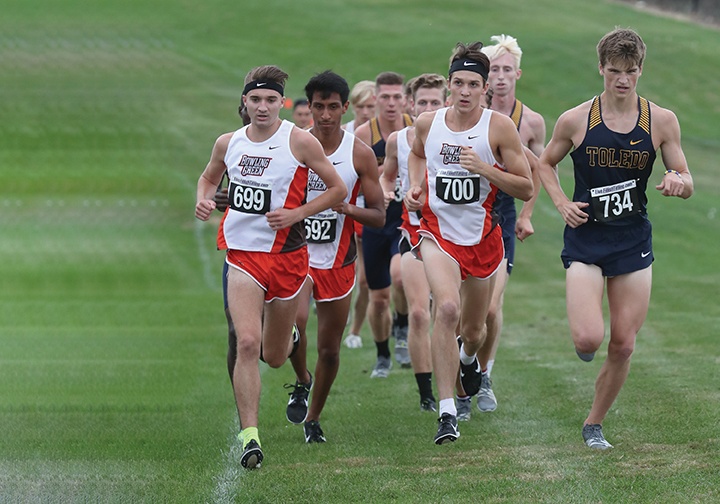 In a sport where steady, incremental improvement is the most reliable measuring stick, you have to like the pace the Falcon Men’s Cross Country team has set in recent years. It is even more exciting to start anticipating the next races on the 2019 schedule.

The Falcon men, with only minimal scholarship support and no track & field program to feed the competitive fire each spring, finished as runners-up in the MAC Championship this fall. That marked the continuation of an unprecedented climb that has moved the team within striking distance of a conference crown, something Bowling Green last achieved back in 1995.

After finishing last or next-to-last from 2002 through 2014, the Falcons were seventh in 2015, fifth in 2016, third in 2017, and then challenged for the championship before finishing second this year.

Head Coach Lou Snelling said there is no secret formula for the Falcons’ success — just attracting quality students who also happen to be accomplished distance runners, and then going to work.

“We always look pretty hard at their academics, and we love to see great students because those are typically high-achieving people as a whole, in whatever they’re doing,” Snelling said.

Noah Schaub and Tyler Phillips led the Falcon charge at the MAC Championship, and also were named All-MAC First Team following the event, the second such honor for Schaub.

Snelling credits a “quality staff,” the momentum created by the extensive upgrades and additions across campus, and the very strong distance running tradition at Bowling Green with helping to attract the type of runners to sustain the program’s push to the top.

“It’s an important piece of history here,” he said about the legacy of Olympic gold medal winner Dave Wottle, All-American Sid Sink and other great distance runners who have worn the Falcon colors.

“It holds a lot of sway with us, for sure. You still hear of athletes today watching the video of Dave winning the gold medal, and I think that speaks to how important that moment was. Success at the very highest level happened here.”

The current roster of BG distance runners appears to be taking the Falcons back to a place of prominence in the sport. “We set big goals, and the guys have bought into it,” Snelling said.