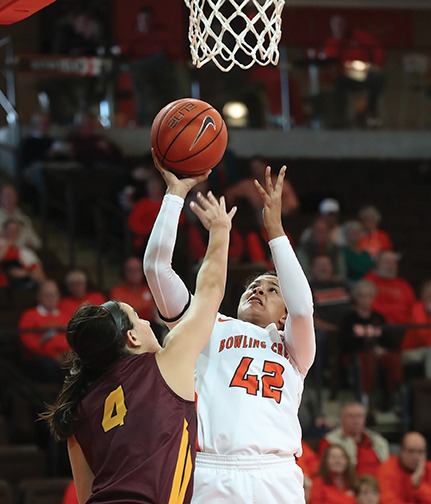 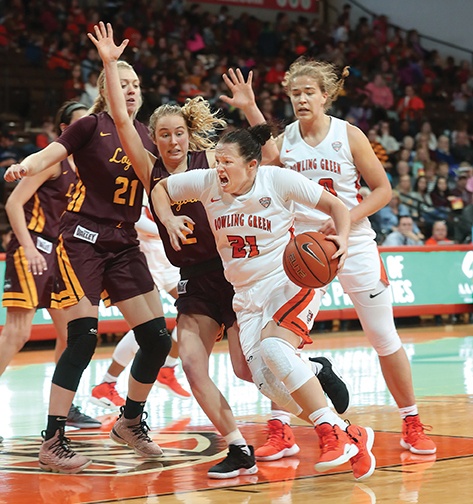 She was listening to the future.

“That School Day game is a great opportunity for us to show all of those kids that if they study hard and work at their particular sport, they have the chance to go on and play at the college level, too, just like we are,” Lambert said. “I was in their shoes once, so no matter what their interest is, if they aspire to do that type of thing after high school — basketball, soccer, volleyball or whatever — the opportunity is there. I hope they come away from the experience feeling more confident about their futures.”

The crowd of more than 4,000 that took in the School Day event saw BGSU post an 88-74 win over a Loyola Chicago team coached by former Falcon and BGSU Hall of Famer Kate Achter. The unique morning tip-off did nothing to minimize the vitality of the BGSU cheering section, on this day composed primarily of students from area middle schools.

Their energy and excitement was evident well before the Falcons drained their first three-pointer, and the BGSU players seemed to thrive in the loud, raucous environment this legion of young fans created.

“Oh, it was clear that they were definitely into it well before the game even started,” Lambert said. “It was kind of funny that while we were out there doing our warmups, a message would come up on the Jumbotron telling the crowd to ‘get loud,’ and the kids would all start screaming and cheering.”

The BGSU women’s team also was taking care of business out on the floor. Morgan McMillen scored a game-high 25 points, Kadie Hempfling had 12 points and a game-high 12 rebounds, while Lambert added nine points and a career-high 10 rebounds.

“We definitely fed off the kids’ enthusiasm, and hopefully this experience encourages them to tell their parents how much fun they had here and that they want to come to more games this season,” Lambert said.

BGSU head coach Robyn Fralick loved the environment, and the way her team responded on the special stage this event created.

“Playing at home is awesome,” coach Fralick said. “The Stroh is a special place and this was a really cool day to have a gym full of cheering kids.”

Fralick emphasized to her players that when the “School Day” game comes around on the schedule, the Falcons are playing for more than another win.

“What we talked about with the team beforehand was that they always have a platform to have an impact, but especially in this game,” she said. “I think of it as an incredible opportunity to connect with the community and I told our girls that we always have a responsibility to use our platform for good. On that day, it’s amplified because we’ve got so many little eyes watching.”

The players embraced the occasion and soaked up the energy in the building, thanks to the school kids.

“It is definitely a little harder to hear play calls and things like that,” joked sophomore center Angela Perry, who scored 24 points in the game.

Coach Fralick, whose two young children were part of the crowd on this special day, said the impact for the students in attendance goes well beyond a bus ride to the BGSU campus, some popcorn and a college basketball game.

“I hope that all of those boys and girls were inspired by what they saw,” she said. “I hope they learned something by seeing how a group of individuals can work together as a team and really accomplish things. This is a great opportunity for us as a team and as a program to deliver that message.”

Coach Fralick said the overall experience, which included interactive elements staged throughout the Stroh Center, provided BGSU with the opportunity to showcase more than a basketball game, and she applauded the efforts of the support staff in creating such a memorable day.

The win over Loyola, the strong performance by her team and the significant contributions from some of her younger players were just part of what Coach Fralick considers the ultimate final score with the School Day event.

“If you can make those children feel like they can do anything, and if you can inspire that in people, especially in little people, then everything we’re doing has a higher purpose, which is ultimately what we’re aiming to accomplish all of the time.”