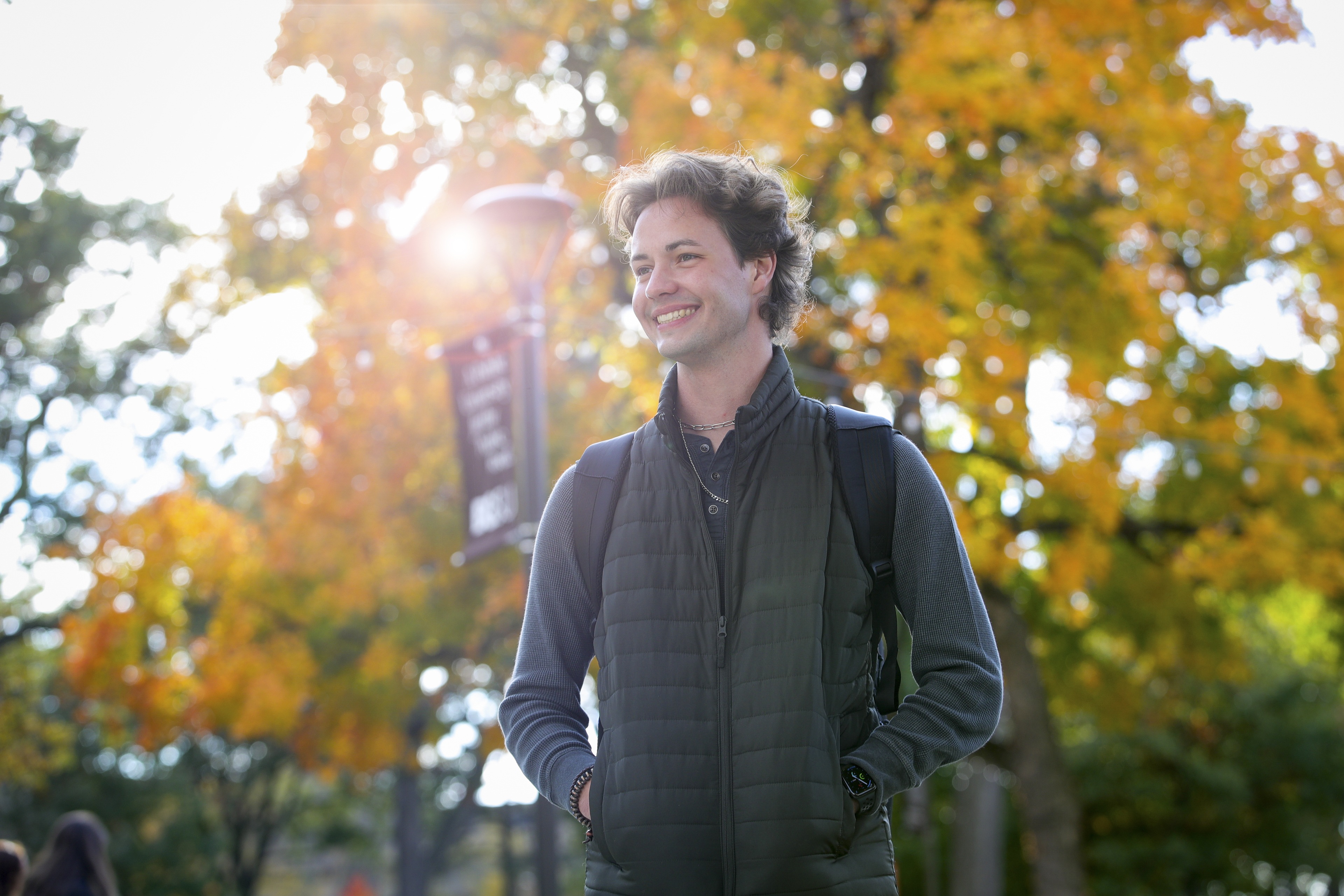 Class of 2022: Schmidthorst College of Business graduate uses time at BGSU to give back, create connections

By the end of his time in high school, there was no debate about where Bowling Green State University alumnus Devan Harmych ’22 was going to college to study finance.

As the son of a BGSU alumna – his mother, Lynnae Harmych ’93, went into the accounting field as well – Harmych grew up coming to campus for hockey games and never wavered about his college choice.

“BGSU has always been a second home for me,” he said. “I did other college tours, but this was the only place I applied. It was definitely always my top choice and always the place I thought I’d go.”

Three and a half years later, Harmych, a native of Amherst, Ohio, is already on the fast track to professional success, but it was the way in which he gave back to fellow students that made him stand out.

Harmych, who graduated this fall with a 4.0 GPA and a dual specialization in accounting and finance in the Allen W. and Carol M. Schmidthorst College of Business and BGSU Honors College, had a professional internship that both reaffirmed his choice to become a public accountant and led to his first job.

After interning with Deloitte, one of the Big Four accounting firms, in 2021, Harmych already has accepted a Cleveland-based position with the company as an audit and assurance associate and plans to complete the Certified Public Accountant examinations in 2023.

“I thought I had an idea of what it would be like to be an auditor, but getting that hands-on experience shows you what you’ll be doing and how you will use the tools and resources you learned in your classes and apply them to the real world,” Harmych said. “To be able to hop in and help out the team in ways that an intern normally wouldn’t definitely was a great experience and helped solidify that I wanted to go into public accounting.”

With a job offer in hand more than a full year before graduation, Harmych sought to help fellow classmates have the same experience that he did – first to grow accustomed to college life at BGSU, then, later during college, to match with an employer doing the work they found meaningful.

On campus, Harmych served as a fall welcome leader to support first-year freshmen, an Honors ambassador and multiple executive-board positions in Beta Alpha Psi, the professional accounting organization. With Beta Alpha Psi, Harmych helped stage a large event called Meet the Firms in which professionals came to campus to interact with more than 80 students to foster connections and help both parties fill internships and full-time jobs.

Harmych used his time at BGSU to hone his skills and find organizations that were important to him, so he said he felt obligated to do the same for others.

“I couldn’t be where I am today without other people helping guide me and giving me advice, and I’ve always wanted to help others the way people have helped me,” he said. “Being able to show other students how BGSU can help them accomplish their dreams is just a way to give back to something that gave so much to me. I want to show students what’s out there and help them see something they thought they might never find.”

Off campus, Harmych provided volunteer consulting work to two nonprofit organizations, the Association of Latino Professionals for America and the Volunteer Center.

Alisa Suelzer ’92 ’99, an associate teaching professor at BGSU who formerly served as the faculty advisor for Beta Alpha Psi, said Harmych’s ability to connect with people will serve him well as a CPA.

“He’s definitely a people person, and a lot of times we don’t associate that with accounting, but when you have that skill, it makes you even more valuable,” Suelzer said. “I think being a connector really helps in public accounting because you have so many clients to juggle. I think he’s going to represent our school really well going to one of the top firms.”

While his time at BGSU has come to a close, Harmych said he feels completely prepared to fulfill his career goals.

“It's a bittersweet moment because I’m sad to leave, but I’m also ready to take the next step forward,” he said.

“I know going forward that BGSU has prepared me for my future and I feel ready. I know I wouldn’t have been this comfortable without the experiences that I had here, so I’m grateful for everything BGSU provided for me. I’m ready for what’s next.”