Water droplets, viewed through a confocal laser microscope, are seen on the surface of raw steel (A) and steel with a coated surface (B). Steel, which is susceptible to erosion issues, shows drastically improved hydrophobicity after the coating is applied.

Researchers in the Center for Photochemical Sciences at Bowling Green State University have developed a coating system that shows promise in preserving historical monuments – and possibly much more.

Funded by the National Park Service, the U.S. Department of the Interior and the National Center for Preservation Technology and Training, the research team went in search of a way to mitigate environmental damage while developing a coating that cured quickly yet had a long life and could be applied in multiple ways.

So far, their results have been both encouraging and award-winning. Presenting the research at the Polymer Initiative of Northeast Ohio (PiNO) conference in October at Case Western University, Sims won the PPG Choice Poster Award.

Initially, Furgal was developing a coating system to make boat surfaces more hydrophobic, or water-repellant, but saw the park service was in search of research to make materials withstand erosion. The fit was natural.

“I came up with this coating system and originally designed it for boats, but it was just a proposal at that time and we hadn’t made anything yet,” Furgal said. “When I saw the National Park grant, I thought, ‘I wonder if we can use this sort of coating for monument preservation.’”

After a full year of testing, the BGSU researchers discovered their system was, in short, effective on a wide variety of surfaces.

“They could use it on anything stone, steel, iron, glass, concrete, brick, wood — pretty much everything but fabrics,” Sims said. “Ideally, it can cut down on erosion and can help with graffiti because you can just wipe off Sharpie or spray paint once the coating has been applied with just a little bit of elbow grease.”

A sample of glass that has been half dip-coated to show the effects of using a permanent marker. The marking is easily wiped off from the coated glass on top.

Acrylics need long curing times, which can make them difficult to use with surfaces that are already outdoors. Fluoropolymers such as Teflon bring environmental concerns and cannot be used on all surfaces, while certain epoxies are prone to oxidizing and discoloration as they undergo erosion.

They also faced the challenge of how to test the coating without the benefit of a weatherometer - an ultraviolet aging technique that simulates sun exposure on coatings - to test a variety of extreme climates, so they improvised.

“We essentially had to make our own weather systems at the beginning, but we eventually just decided doing tests inside the building was not feasible,” Furgal said. “Instead, we decided we were going to go to the roof of the building and put them out there in the real world. We had one year of real-world study before we published anything.”

They moved the coated surfaces, including stone and glass, onto the roof of the Physical Sciences Laboratory Building on campus, subjecting them to one of their geographical advantages: northern Ohio weather provides many kinds of erosion.

“Thankfully, Ohio is pretty good since we get everything: plenty of rain, plenty of ice, plenty of snow, some extreme heat, some extreme cold,” Sims said. “We don’t have forest fires or sandstorm-type conditions, but they saw pretty much everything else.”

During testing, the tri-system coating samples showed improved hydrophobicity and less premature reactivity to multiple types of erosion on many surfaces: glass, steel, wood, marble, granite, brick, and nitrile, all of which benefitted from the coating.

Wood remains the primary construction material for many historical buildings, which can be a challenge to maintain because wood is both porous and flammable. Like brick, however, sampling showed the surface absorbed the coating, making it more resistant to water damage.

Additionally, flame resistance testing proved promising. During exposure to direct flames, treated wood maintained its shape and self-extinguished 11 seconds after the flames subsided, which was 90% faster than untreated wood – showing a possible application for wooden structures in areas susceptible to forest fires. 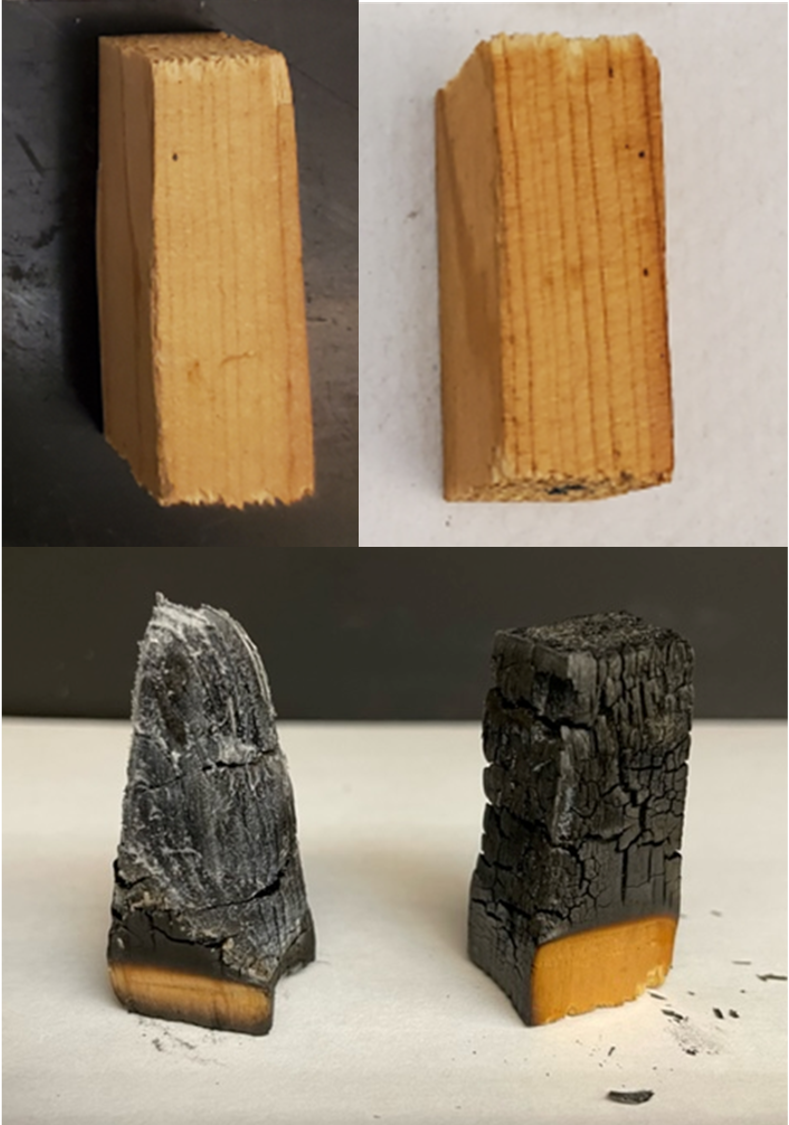 Comparison of an uncoated (left) and coated (right) wood surface through direct exposure to fire. The coated wood extinguished itself in 11 seconds and maintained its shape, which could be useful in areas prone to forest fires.

Coated stone surfaces observed for the entire year demonstrated long-term stability even in exposed outdoor environments in temperatures ranging from below zero to more than 100 degrees Fahrenheit, which would make it ideal for monuments made of stone such as gravesites.

While the research set out to solve a problem from the National Park Service, it also has shown the coating system could be applied even more broadly. The researchers currently have a patent pending and are working toward both licensing and startup company possibilities for commercialization.

“We found that it worked,” Sims said with a laugh. “If you had asked me a year ago, I would have said I would have been happy if it just worked on stone, but we found it works on much more than that.” 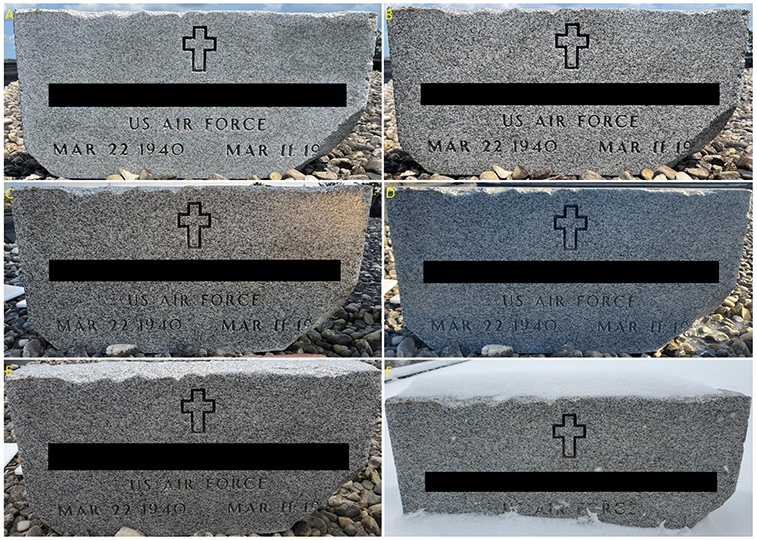 One possible application of the coating research performed by BGSU researchers is on gravestones, one of which is shown uncoated (A), coated after one day (B), 111 days (C), 131 days (D), 184 days (E), and 194 days (F) of outdoor exposure to a variety of weather conditions. The coated stone demonstrated long-term stability even in exposed outdoor environments.