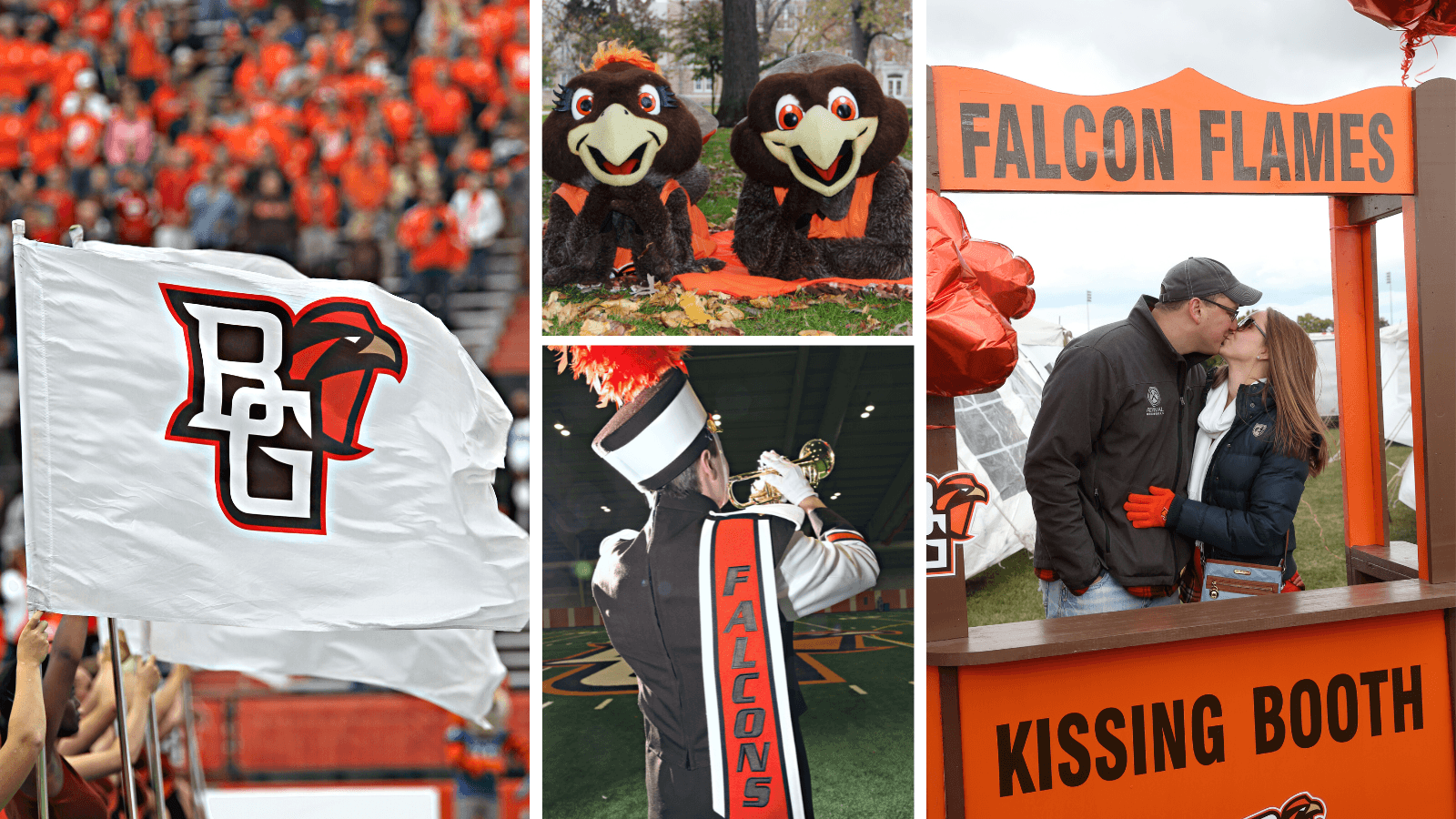 Traditions, superstitions and Homecoming: Take a look at what makes BGSU unique

Did you know there are more than 11,400 Falcon Flames? Or that SICSIC predates Freddie Falcon? Learn about all that and more.

This year's Bowling Green State University Homecoming is a particularly special occasion, as 2022 marks the University's 100th homecoming for alumni to return to campus.

Since the state of Ohio formed what was then called the Normal College in 1910, a lot has changed, including the name. The Normal College became a state college and eventually a university, and, finally, the BGSU alumni came to love developed its own personality, unique features and traditions that make the University what it is today.

As alumni prepare to return to BGSU, we revisit the past to explore how the University came to be.

Why orange and brown?

To this day, we’re the only Division I university with the combination of those two colors.

BGSU came to adopt its official colors of burnt orange and seal brown as a result of happenstance. The University’s first president was a man named Dr. Homer B. Williams, and during the first year that BGSU held classes, in 1914, Williams convened a group from the Industrial Arts department to choose the school colors.

But it was Williams himself who happened upon orange and brown. While taking a trolley ride north to Toledo, Williams was seated behind a woman wearing a fashionable hat with orange and brown feathers — and he liked the combination so much that he recommended that his committee suggest them to the Board of Trustees.

The rest, as they say, was history. The BGSU Board of Trustees adopted the colors, and 108 years later, we’ve never wavered from the unique color scheme.

For many of our alumni, BGSU was not only where they studied, obtained a degree or made friends, it was where they met their soulmates. Falcons who fell in love with another Falcon and married are called Falcon Flames, and they hold a special place among alumni.

The group is a formal part of the BGSU Alumni Association, and Falcon Flames receive Valentine’s Day cards and a newsletter recounting BGSU love stories from the University every year.

Leon Winslow, who was part of Williams’ committee to pick the school colors, designed the official University Seal in 1914.

The Normal College originally was designed to be a teacher training institution. Former Ohio politician William Creighton Jr. — who, among other roles, was Ohio’s first-ever secretary of state — believed the University was a rising sun in higher education, which Winslow took to heart.

He modeled the University Seal after the State seal, dividing it into four parts with “Bowling Green State Normal College” around the outside. The sections include a sheaf of wheat to represent Ohio agriculture, a bundle of 17 arrows to represent Ohio’s place as the 17th state admitted into the Union, a mountain range and a rising sun.

Since then, the Seal has undergone a few changes. In 1958, former University purchasing officer Glenn Christian revised the seal to include the state tree and the state flower, the buckeye and the carnation. He also tweaked the fringe lines, the font and the sun’s rays.

Student foot traffic around the seal often goes like a roundabout according to superstition, which says that a student who passes to the right will do well on their next test, while students who pass to the left will fail their next test. 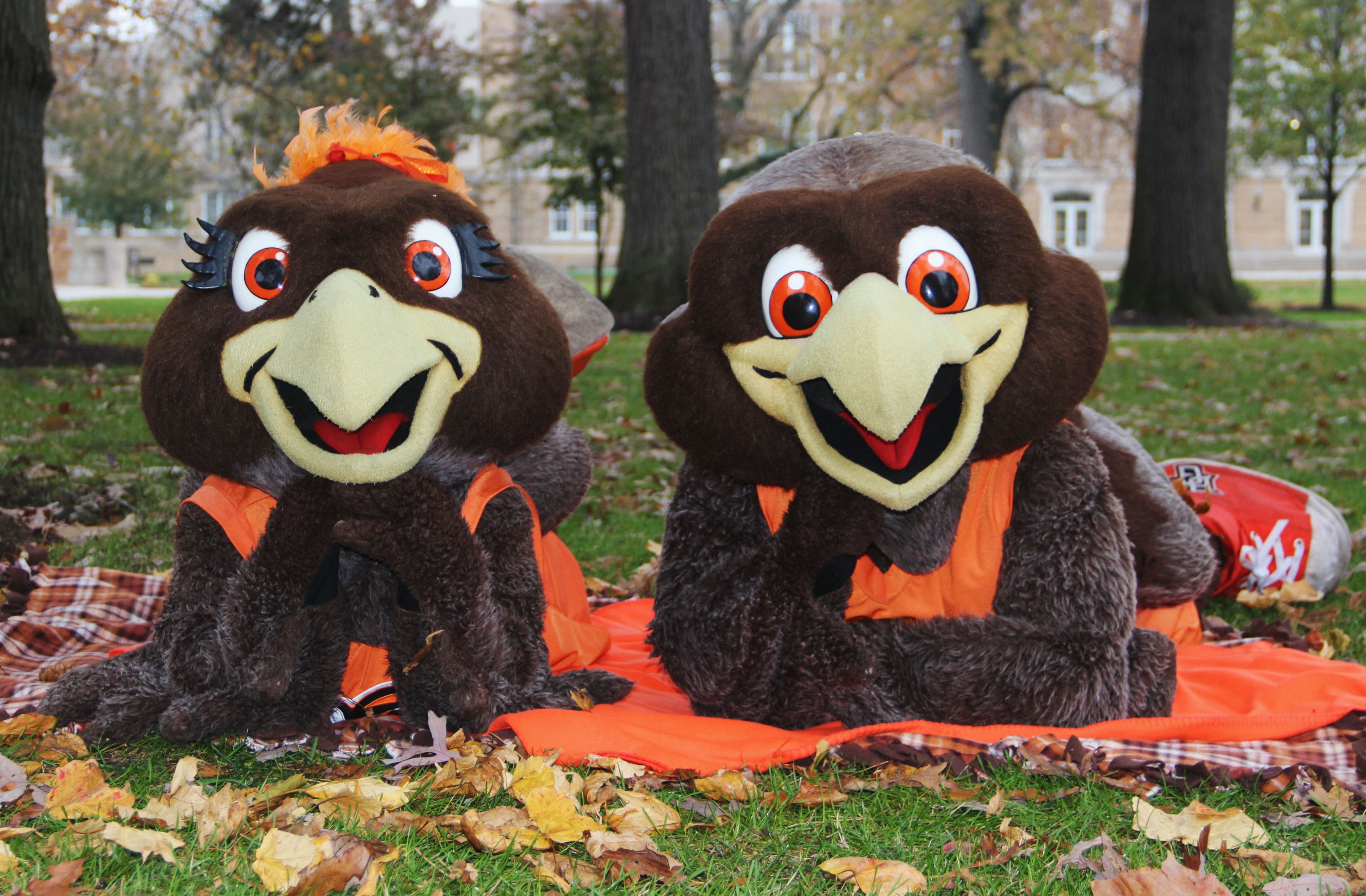 On Oct. 4, 1946, six university students — Gilbert Fox among them — received a cryptic letter that told them to meet in the president’s office at 12:45 a.m. the following morning, and instructed them to memorize the letter and destroy it as soon as they had done so.

All six were understandably perplexed, but soon came to find out the meeting had been called as a result of a meeting among University President Frank J. Prout, the Rev. James Stoner and Richard Harig, a senior member of Sigma Alpha Epsilon fraternity, all of whom agreed the University needed more school spirit. The idea arose for a new, secret spirit organization with two seniors, two juniors and two sophomores.

In addition to Harig and Fox, James Limbacher, Max Hofmeister, Earl Mott and Erwin Potts were the members of what came to be known as SICSIC, the meaning of which remains a secret except to members.

The organization remains active, with members attending athletic events wearing masks and overalls, hanging signs across campus and imploring fellow students to cheer on the Falcons. Every year, the two graduating seniors reveal themselves as members of SICSIC.

Four years after the creation of SICSIC, mascot Freddie Falcon appeared for the Falcons’ home basketball game against MAC rival Ohio. The Alpha Phi Omega fraternity came up with the idea, and student Bob Taylor was present at the game with a brown sweat suit, a cape of feathers and a papier-mache Falcon head, making him the first Freddie.

Freddie’s little sister, Frieda, first appeared in 1966 — actually a male cheerleader in disguise — and did not reappear again until the 1980-81 school year, when Sue Sheard became the first official Frieda.

Today, the pair is ranked among the best mascots in college sports, and like SICSIC, their identities remain a secret until a reveal at the end of the hockey and basketball seasons.