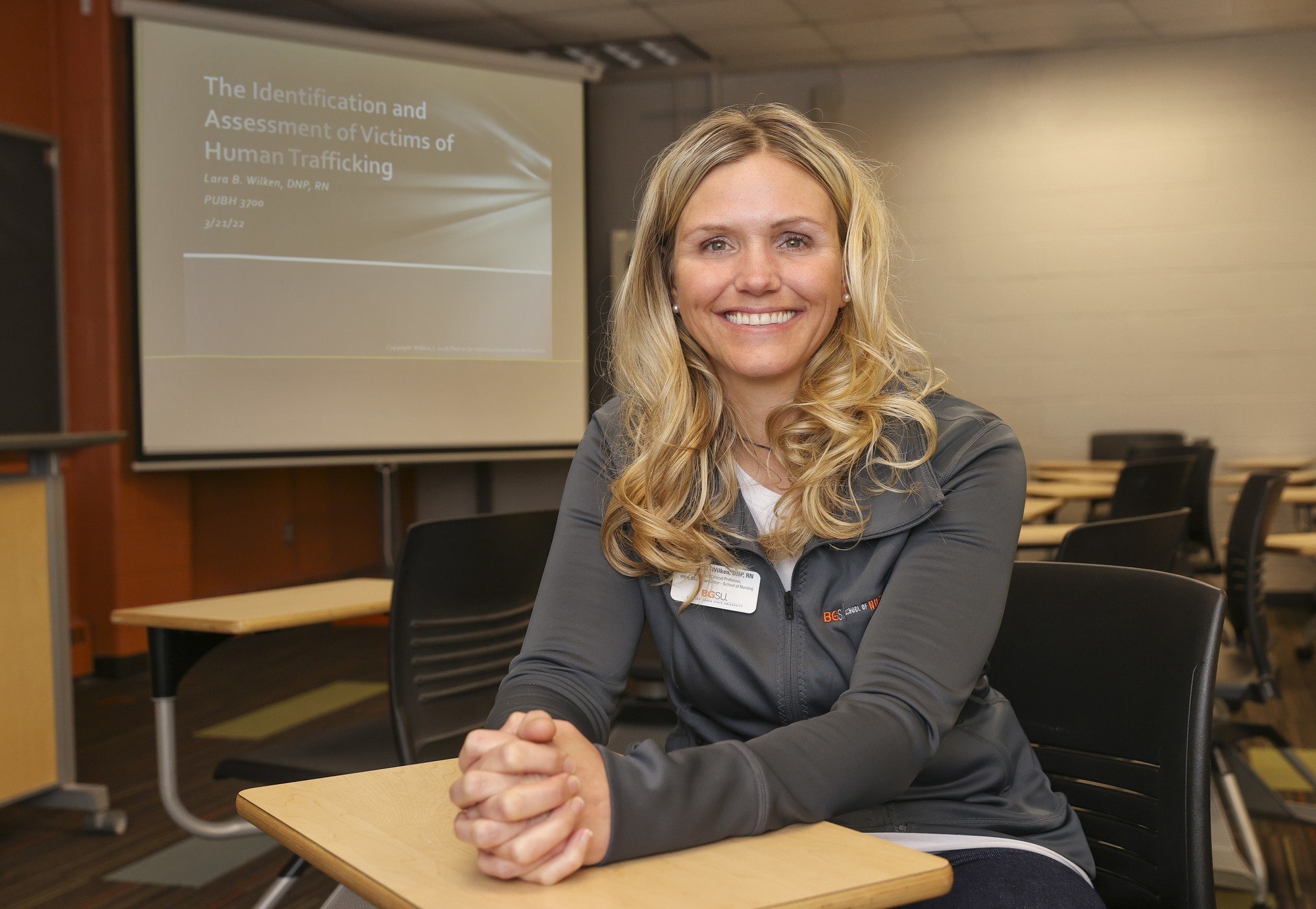 Since 2007, the National Human Trafficking Hotline has taken nearly 74,000 reports of human trafficking nationwide. Since then, Dr. Lara Wilken '15, assistant clinical professor in the Bowling Green State University School of Nursing, has worked to raise awareness about the issue, although she admits it hasn't always been easy.

"When I started my work I had to sneak in details about human trafficking into my presentations because a lot of people just didn't believe it was happening in the United States," Wilken said of presenting in health care settings as a nurse. "A lot of people at the time thought human trafficking was something that just happened overseas, especially in the health care field."

Nowadays, Wilken says the conversation around sex and labor trafficking is much more palatable, particularly because the problem persists. In 2020 alone, the National Human Trafficking Hotline received 10,583 reported cases of human trafficking nationwide. Of that number, 310 reports came from Ohio, ranking the state No. 6 for the highest number of cases in the U.S.

Wilken, who serves as the University's RN to BSN coordinator, started her educational journey at BGSU Firelands several years after dropping out of high school. While she was never a victim of human trafficking, Wilken is transparent about her life decisions. Reflecting on her past vulnerabilities and understanding the grooming process traffickers use, Wilken can see just how easily someone can be susceptible to trafficking.

Tapping her knowledge and experience, Wilken has made it her mission to educate BGSU students on how to care for and treat trafficking victims.

"It's so important for health care providers, particularly nurses, to know how to identify signs of trafficking in a patient," Wilken said. "Too often individuals involved in the life of trafficking can be easily overlooked. But, if a nurse has the understanding and the skills, they can take the steps to help this vulnerable population get the treatment and resources they need."

At the beginning of March, Wilken was appointed co-chair of the Public Awareness Subcommittee on Yost's Human Trafficking Initiative team. In her new role, Wilken spearheads efforts to educate Ohioans and anti-trafficking coalitions about human trafficking in general, common myths and misconceptions, and available resources.

"Awareness is something I'm very passionate about, and I'm so honored to be serving in this role," Wilken said. "One thing we're focusing on right out of the gate is labor trafficking. We're really hoping to help people understand how prevalent it is because it's a major problem. It's a very important initiative for us moving forward."

Additionally, Wilken serves on the attorney general's Health Care Subcommittee, which aims to improve the care of human trafficking patients in health care settings and increase medical professionals’ awareness of the issue. Over the last year, Wilken has worked with committee members to develop an evidence based, survivor-informed template for health care providers to use and reference when assessing and treating trafficking victims.

If that work wasn't enough, Wilken also presented at Yost's and Fedor's annual human trafficking summits held earlier this year. Assisted by a fellow nurse and a trafficking survivor, Wilken provided insight and simulation on how health care providers can address the medical needs of those in the life of human trafficking. For Wilken, including others in the conversation, particularly survivors, helps drive home the message around the serious, life-changing implications of human trafficking.

"We can study human trafficking and do all of this work to understand the prevalence of the issue and to provide education, but at the end of the day, survivors are the experts," Wilken said. "It's so important to include their voice in the education process. It helps to break down barriers to identification that are commonly missed in clinical settings, and that's ultimately the goal. As health care providers, we want to be able to recognize those red flag indicators in patients and provide compassionate, trauma informed care."

Wilken's work hasn't gone unnoticed at the University. BGSU College of Health and Human Services Dean Jim Ciesla said he's continually impressed by the work she does to educate future nurses and Ohioans about human trafficking.

“We are very fortunate to have Dr. Lara Wilken on our nursing faculty," Ciesla said. "Lara brings great passion to her anti-human trafficking scholarship and advocacy. She generously shares her time and academic expertise —most recently agreeing to serve the Ohio Attorney General’s initiative on human trafficking — reflecting her commitment to bettering the health and welfare of the people of Ohio. Dr. Wilken is a standard bearer in the struggle against human trafficking.”

Forever focused on education and awareness, Wilken also recently wrote a chapter in a forthcoming peer-reviewed publication centered on the effectiveness of role playing as a method for identifying and assessing human and labor trafficking victims.

While it may seem like a lot of work, Wilken said she wouldn't have it any other way.

"I almost feel like I didn't choose this, but it chose me," Wilken said of her passion for educating others about trafficking. "Outside of my family and career, much of my life is very much devoted to raising awareness on this topic that I care so very much about."