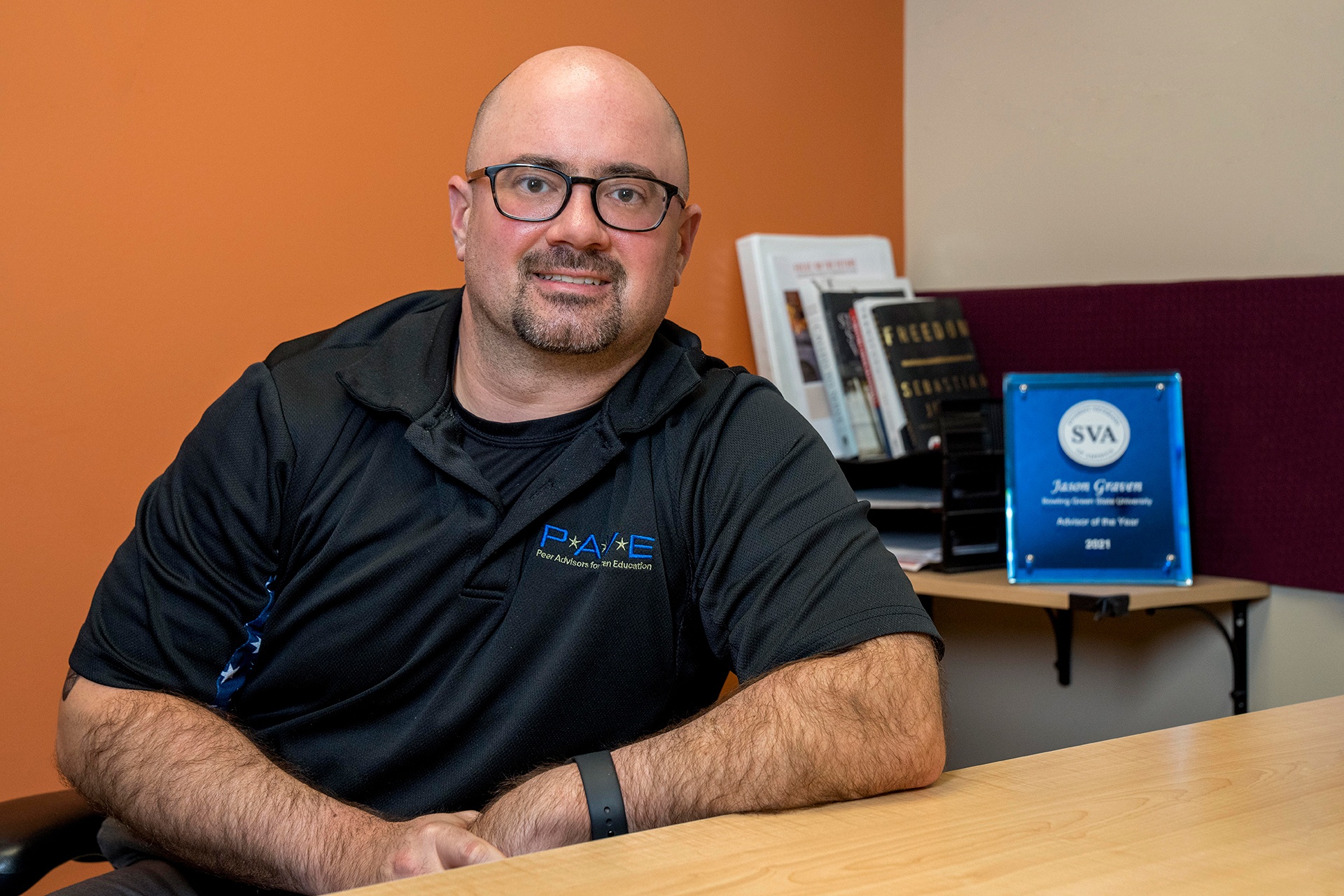 BGSU advisor selected from national network of more than 1,500 chapters

The staff in the office of Nontraditional and Military Student Services (NTMSS) has been instrumental in Bowling Green State University being ranked fifth in the nation - and No. 1 in the Midwest - for veterans and active military students by the Military Times in its Best for Vets: Colleges 2021 rankings. One of their own was recently recognized as a shining example of the office’s dedication to the well-being and success of student veterans.

Jason Graven, military program coordinator with NTMSS, has been named the National Chapter Advisor of the Year by Student Veterans of America, which boasts a network of 1,500 on-campus chapters representing more than 750,000 student veterans nationwide.

For his part, Graven sees the recognition “as a ‘we’ award, not a ‘me’ award.”

“This journey for me started 17 years ago as we transitioned to civilian and academic life in the early years of Iraq and Afghanistan,” Graven said. “The BGSU SVA students own a piece of this recognition every bit as much as me because they believed in the mission, in themselves, and, most importantly, in each other. They found unique and creative ways to stay active when they could have easily walked away.”

The honor was bestowed on Graven at the SVA’s annual national conference, held in Orlando, Florida, in early January. U.S. Sen. Jon Tester, D-Montana, who serves as the Chair of the Senate Veterans’ Affairs Committee, declared Graven the winner from among five national finalists. 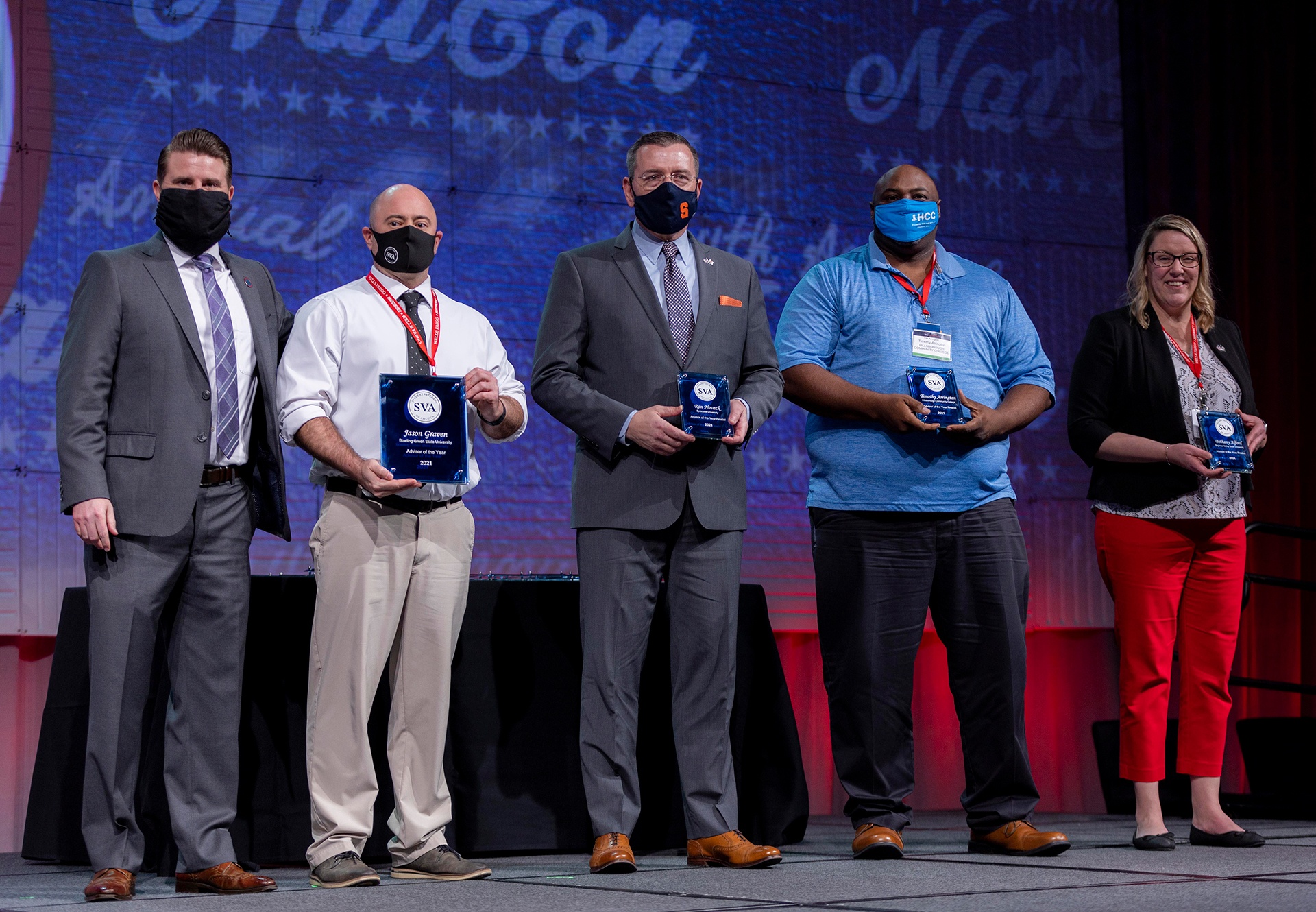 Impact at a personal level

The SVA is all about its chapter leaders, describing its mission as, “inspiring yesterday’s warriors by connecting student veterans with a community of dedicated chapter leaders.” Students who have been active with the BGSU chapter of SVA can attest to Graven's impact as their chapter advisor.

Grant Rospert ‘22 is a past president of the SVA chapter at BGSU and serves in the Army National Guard. He called attention to Graven’s dedication and loyalty to student veterans.

“When I met Jason as our new SVA advisor, it was clear he cared about SVA and other vets,” Rospert said. “He had fresh, new ideas for our chapter. As members, we agreed and supported them. Over the past several years it has been a pleasure to work with Jason and he truly deserves this award.”

Kat Dobbs ’21 also served as SVA chapter president and is a medic with the 180th Fighter Wing of the Air National Guard. She pointed to Graven’s empathy and insights as a fellow veteran.

“Without Jason's help during the pandemic and during my activations, I likely wouldn't have graduated when I did, and I wouldn't have the job I have now,” Dobbs said. “His experiences in the military make him incredibly approachable and somebody that we as military students can turn to because he understands us.”

The SVA National Chapter Advisor of the Year award acknowledges the outstanding mentorship, service and advocacy that Graven has provided to the BGSU chapter as its advisor, offering guidance to student veterans on how to operate effectively within the University. In addition, Graven was recognized for engaging with campus faculty, staff and administration to promote student veterans and the SVA chapter as important assets to the campus and community.

Dr. Barbara Henry heads the NTMSS and has described BGSU as an exceptional choice for veterans and active military students due to the University’s strong commitment to the sort of individualized attention and support that Graven epitomizes.

“We are so proud that Jason was selected as the National Chapter Advisor of the Year. His dedication to the military and veteran community is reflected in his mentorship and guidance to the BGSU chapter of SVA.”