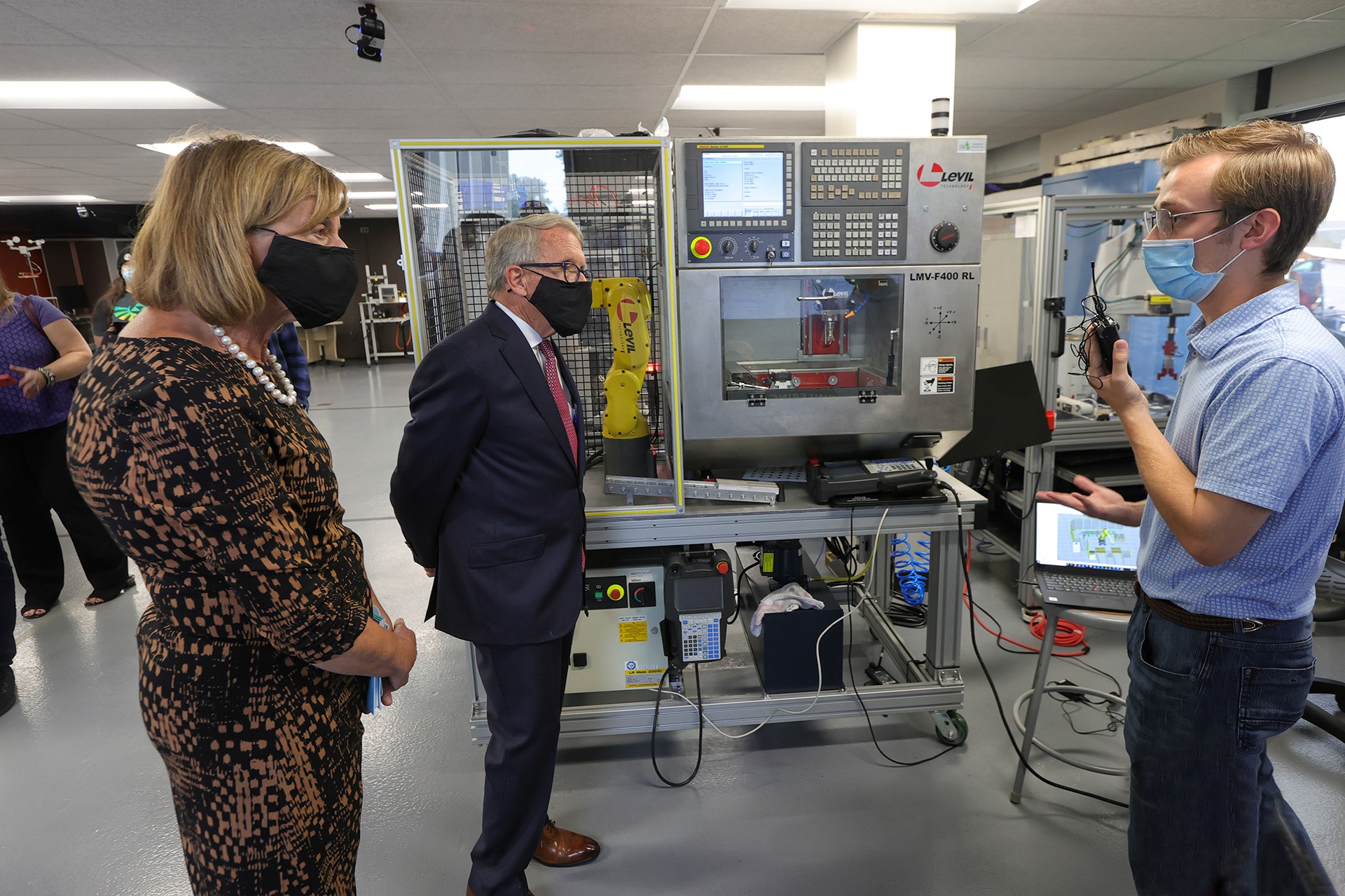 Ian Kennedy was on “pins and needles” when he gave a robotics demonstration to Ohio Gov. Mike DeWine recently in the Stephen and Deborah Harris/RIXAN Robotics Laboratory at Bowling Green State University.

Kennedy, a senior majoring in mechatronics engineering technology in the College of Technology, Architecture and Applied Engineering, was chosen for the exhibit to show the governor his senior project and because of his extensive experience working with robots.

“My goal is to become a robotics engineer and master-certified in FANUC,” he said. “I thought I was well suited and well prepared, but it definitely was still nerve wracking. He asked how my classes here at Bowling Green and my work in the lab have been able to help me progress out in the field or on the job site.

“I actually got to talk to him a decent amount — I think I went a little bit over the time. I went on to talk about the actual manufacturing system that I was working on and how important it is that hands-on work with this type of machinery is significant because Ohio is a massively industrialized state and robotics has an ever-increasing role.”

The mechatronics engineering technology program at BGSU is an interdisciplinary field that prepares students to work with emerging technologies in robotics and advanced manufacturing. This in-demand field includes the design, development, implementation, automation and management of robotics system technologies such as industrial robotics manipulators, automated guided vehicles, navigation and inspection, assistive robotics, device technologies, human-robot interaction and many other exciting applications.

Kennedy, who attended the Millstream Career Center in Findlay City Schools, developed an interest in robotics and robot competitions while in high school. He was drawn to BGSU because the University had just unveiled its mechatronics engineering technology program and lab at the time.

“I was given a tour prior to the start of the program opening, and they had a bunch of Mitsubishi Delta SCARA robots in that lab that I really got interested in,” said Kennedy, who will graduate in December. “Plus, it was a four-year program — I really wanted the background knowledge of engineering so that when I go out in the industry, it's not just about the robot; I will understand the other components, equipment and what the robot interacts with and communicates with.”

Kennedy spent the summer as an intern with Perrysburg-based RōBEX, a precision integrator of industrial robots that designs, builds and installs custom robotic systems that improve productivity and safety through industrial, collaborative and autonomous mobile robots.

Kennedy was offered a job at RōBEX at the end of his internship, and is working part-time during his final semester at BGSU. He will start working full-time after he graduates.

“At RōBEX, I spent six of the 12 weeks in central Ohio, where we had nine of our autonomous mobile robots (AMRs). Essentially, what they're used for is end-of-line products, which will be boxed, stacked on a pallet and wrapped in plastic wrap. That stack on the pallet is then transferred onto our AMR robots, which transfer that pallet to its designated location for its last final step in the process of being shipped.”

“Ian came into his internship with RōBEX with extreme confidence and a high level of composure with regard to his expectations of the position and the various position requirements that would be expected of him,” Bowers said. “It’s evident that the educational foundation BGSU and the mechatronics engineering technology program truly prepared him for ultimate success in his role here. We incorporated a variety of projects that needed collaboration, expertise, clear understanding and patience to reach the goals set by the team, and Ian exceeded every expectation we set for him.”

Kennedy gave credit to the mechatronics lab at BGSU for preparing him for a career in robotics.

“They really press heavy on the industrial side of things in the lab,” he said. “Everything I learned in the robotics lab I was able to apply to my first internship. From going to classes in that lab, I was able to recognize the equipment, machinery and components from the lab and take what I've learned in the lab and apply to the actual industry.

“After I graduate from Bowling Green, I will continue to work at RōBEX. Currently, I'm an automation engineer. My goal is to work my way up, learn robotics as much as possible, specifically FANUC and MiR applications and then possibly become a robotics engineer.”