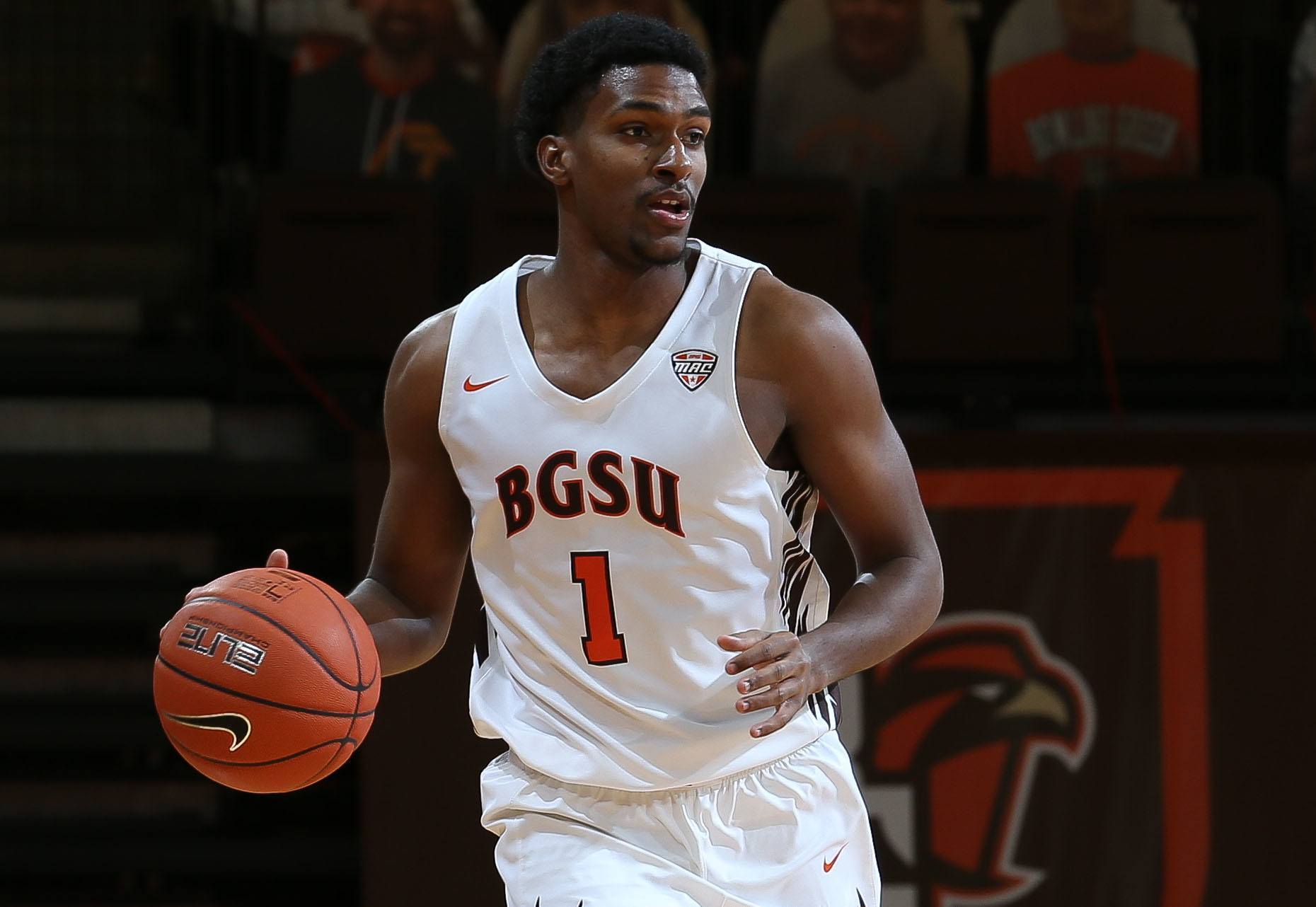 Justin Turner on his career at BGSU: ‘It was a pretty special time’

Even with a casual look at the Bowling Green State University men’s basketball records, it doesn’t take long before you find a listing for the Falcons’ all-time leading scorers.

There’s one player who tops them all: Justin Turner, with 2,077. 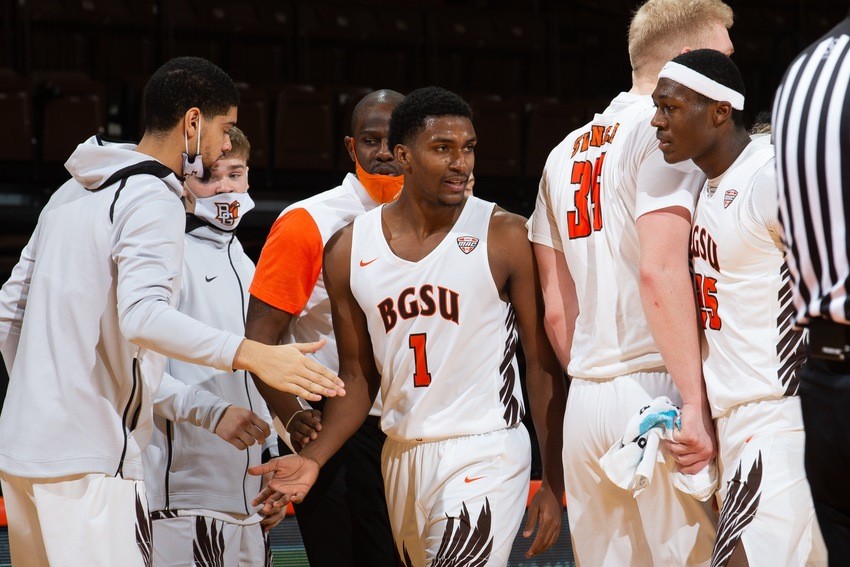 Turner, a 6-foot-4 guard from Detroit, is the only player in team history to be named first-team All-MAC three seasons in a row. A post-baccalaureate student majoring in popular culture after already having earned a Bachelor of Education in individualized studies while carrying a 3.18 GPA, he now has his sights set on playing in the NBA.

Former Falcon Richaun Holmes ’15, currently the center for the Sacramento Kings, potentially is poised to sign a multi-year, multimillion free agent contract this offseason. Holmes, who was drafted in the second round of the 2015 NBA Draft, returned to BGSU during Turner’s junior season and offered some advice.

“I remember he came to one of our games last year and he told me to keep working hard and improving my game, that people were taking notice,” Turner said.

“I remember he came to one of our games last year and he told me to keep working hard and improving my game, that people were taking notice,” Turner said. “If I get to the NBA, I’m definitely going to represent Bowling Green to the fullest just like Richaun Holmes. He’s doing a great job right now. I would carry on that legacy and represent Bowling Green just like him.

“It’s great to know how professionals work and what it takes to get to that point — understanding everything I have to do and the work needed to get there. No one knows exactly what to expect, but just having that knowledge is a good thing.”

He said that becoming BGSU’s all-time leading scorer was an honor, as well as a tribute to the overall consistency of his time with the Falcons.

“You have to be able to score a lot of points over a period of time, so the consistency in the work that I put in definitely contributed to that,” said Turner, who averaged 19.3 points while leading the Falcons in scoring for the third consecutive year this past season. “I think what made it special was that I did it with the person I passed on that list as an assistant coach (Anthony Stacey) for three of the four years I played here. Having Stacey in my corner during my career and also at the game when I broke his record was kind of unique and made it even more special.

“It’s an honor to be next to names like Antonio Daniels and Anthony Stacey, and the list goes on. They had some good professional years ahead of them when they were done playing here. If I’m being honest, especially when you look at it on the professional side, I believe I can still get better and there’s a lot more to experience. My goal is to keep getting better and then hopefully everything will turn out well.”

After the season ended, Turner had a chance to look back on some of his accomplishments such as being named to the Mid-American Conference first team each of his final three seasons at BGSU. 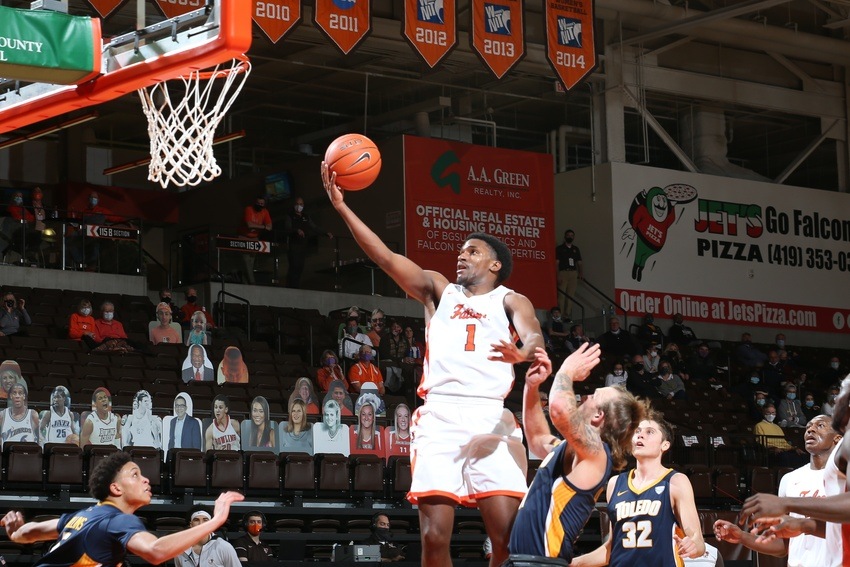 “When I made first-team All-MAC my sophomore year, I didn’t think it was a big deal,” he said. “Coach (Michael) Huger sat me down and explained what an accomplishment it was. Once I got into my sophomore year, I just wanted to keep getting better, and I don't really expect anything less. I never want to regress. Now that I can look back on it, it was a really good accomplishment to do it three years in a row.”

Huger’s reputation as a tenacious point guard when he played at Bowling Green from 1989-1993 also paid dividends for Turner.

“Coach Huger is a guard’s coach,” he said. “It was like getting the best of both worlds. You get yourself a (scoring) guard’s coach but also, he prides himself on the defensive end, so you can learn some things on both sides of the game, defense and offense. Being under him, you learn a lot because he was a point guard in the MAC, a first-team-caliber point guard. It was unique stuff like that that helped everyone’s game.”

“Justin has had an incredible impact on our basketball program,” Huger said. “He was one of the key catalysts in transforming the program and leading us to a nice string of successful seasons at the top of the MAC. Justin’s relentless work ethic was contagious and showed the rest of the team what hard work looks and feels like. On and off the court, Justin represented BGSU in a first-class manner. His impact is one that will be felt for years to come.”

Near the end of the 2019-20 season, the Falcons (21-10 overall and 12-6 in the MAC) seemed poised to make the NCAA Tournament for the first time since 1968. There were some hurdles to clear, but nothing too tough as March neared — or so it seemed.

“It was very disappointing because the previous year we made the MAC championship,” Turner said of the 2018-19 season. “We hit our transition period as a program to become a respectable mid-major. And then (in 2020-21), we had a lot of highs: We beat Cincinnati and Western Kentucky; we beat some tournament-valid teams and we played LSU on the road really well.

“The low was I got injured, but we bounced back from that and stayed the course at the top of the MAC. We ended, however, on a three-game losing streak, but we liked our chances in the conference tournament and felt like we could have gotten back to the title game. Then COVID hit and was probably the worst thing that could have happened, but, at the same time, it was something that everybody was dealing with. There was nothing we really could do about it. We prepared all year trying to give ourselves the best chance, and sometimes it just doesn’t work out.”

After his junior season was ended prematurely by the COVID-19 global pandemic, Turner entered the transfer portal. Ultimately, however, he decided to finish his college career at BGSU.

“I hated that there was a potential chance of me leaving, and I didn’t do what I came here to do,” he said. “The fact that COVID left everything up in the air and you don’t know how things would have played out, you always think about what could have happened. It made me feel that if we had a season (this past year), I wanted to finish what I started here.”

Since the season ended, Turner has been working on his game and fitness to catch the eyes of scouts ahead of the NBA Draft on July 29. His size at the point and his uncanny ability to hit the big shot in big games has a chance at the next level.

“From an individual standpoint, I want to get in the best shape possible,” he said. “I want to get to the point where I am a machine on the court. Other than that, I just want to keep polishing my skills, extend my range and become more consistent from 3-point range. I also am working on becoming a better defender — it’s an all-around development and process.”

That process began when he first arrived at Bowling Green.

“Being new to the area when I first arrived here, it was pretty slow going,” Turner said. “Once basketball started, though, things started to speed up a little bit. I really developed a good relationship with the students, fans, community and the University during my time at BGSU. I enjoyed my time in my classes and the social life that I developed here, both on and off the court. It was so much more than basketball. Overall, it was a pretty special time.”