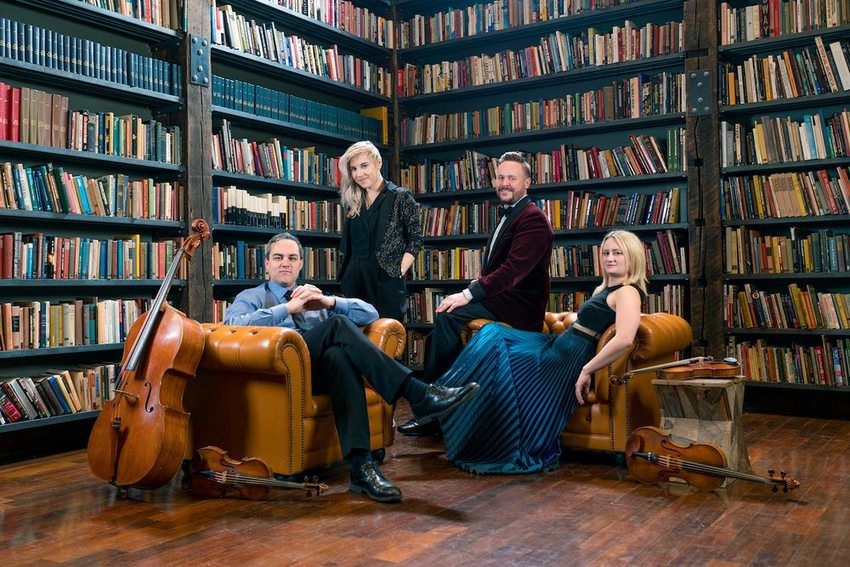 Chicago’s Spektral Quartet is the featured musical ensemble for Bowling Green State University’s Music at the Forefront residency April 9-13, sponsored by the MidAmerican Center for Contemporary Music (MACCM) in the College of Musical Arts.

The three-time Grammy-nominated quartet will present a virtual concert for the public at 8 p.m. on April 12 and air an episode of “New Music Help Desk,” the group’s ongoing YouTube series at 4 p.m. on April 9. The show will feature questions – ranging from career advice and score preparation to harmonics and movie recommendations – asked exclusively by BGSU music students. Several other student-focused events are planned throughout the residency.

Spektral, with violinists Clara Lyon and Maeve Feinberg, violist Doyle Armbrust and cellist Russell Rolen, actively pursues a vivid conversation between exhilarating works of the traditional repertoires and those written this decade, this year or this week. Since its inception in 2010, Spektral is known for creating seamless connections across centuries, drawing in the listener with charismatic deliveries, interactive concert formats, an up-close atmosphere and bold, inquisitive programming.

The group has performed at such notable venues as the Kennedy Center, Miller Theater, Library of Congress and NPR’s Tiny Desk Concerts. As champions of the work of Chicago-area composers and cultivators of collaborations and residencies in the Chicago region, Spektral was named “Chicagoans of the Year” in 2017 by the Chicago Tribune. This season, the group announced its Digital Artist Residency at University Musical Society with Lebanese-born Afro-Tarab/jazz innovator Tarek Yamani.

The virtual concert on April 12 will feature the work of composers Eliza Brown, Samuel Adams, Anna Thorvaldsdottir, Katherine Young, Tomeka Reid and Sufjan Stevens. Links to the Music at the Forefront events are available on MACCM’s website.

Music at the Forefront is an annual concert series featuring performances by accomplished and innovative performers of contemporary music. For more information, contact MACCM Director Kurt Doles at 419-372-2685 or at kdoles@bgsu.edu.