Scot Loeffler has a formula for success 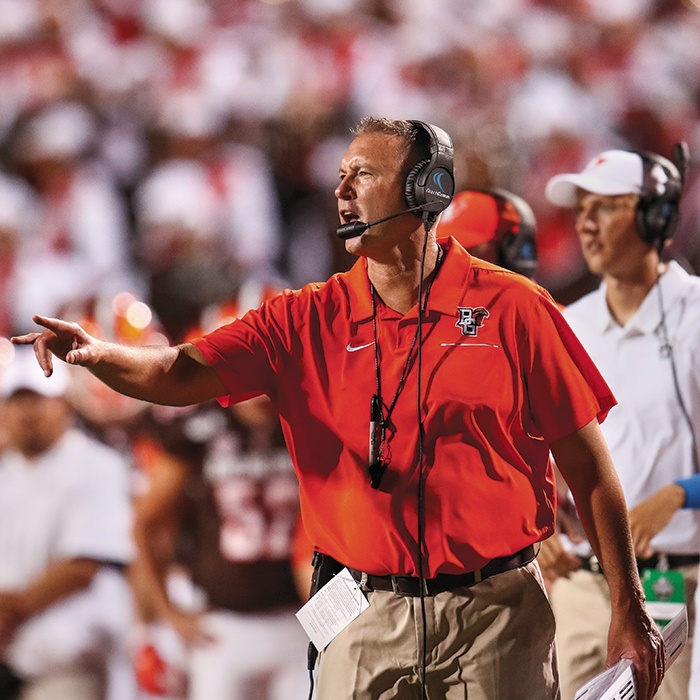 The shirtsleeves are rolled up. The whistle is at the ready. The laptop is loaded with scouting reports, player performance information and academic achievement data. The concentration and focus are laser-like, and the goals and expectations are ambitious, since in the mind of the coach, anything less would be unacceptable.

“We’ve got work to do,” Bowling Green State University’s new Head Football Coach Scot Loefﬂer said as he approached the 2019 season, the 100th year of football at BGSU. “But the formula for success is not complicated — surround yourself with great coaches, recruit a lot of really good players and then develop them, teach them the value of discipline and coach them really hard. That’s the road map I expect to follow.”

The Ohio native, who played quarterback at Michigan before spending more than two decades as a college and NFL assistant coach, worked on his craft during career stops at Florida, Temple, Auburn, Central Michigan, Virginia Tech, Boston College and Michigan, and with the Detroit Lions. He learned from the likes of Lloyd Carr, Frank Beamer and former BGSU Head Coach Urban Meyer, and the staff Loefﬂer has assembled at BGSU has more than 90 years of top-tier experience coaching football.

“Scot is an outstanding coach and the fact he’s an Ohio guy — that’s the key to energize that team with Ohio players — and I think that’s what he’ll do,” said Meyer, who had Loefﬂer on his staff at Florida. “I’ve got a great feel for that program and I’m glad he’s there.”

Loefﬂer said the history, passion and pride associated with Falcon Football made this an incredible opportunity for him as a ﬁrst-time head coach.

“It is an exceptional honor to be a part of this,” he said. “Our brand of football will be a combination of great defense, great special teams and a physical, explosive offense. I can promise relentless effort, loyalty and making sure every day that we are doing everything the right way.”