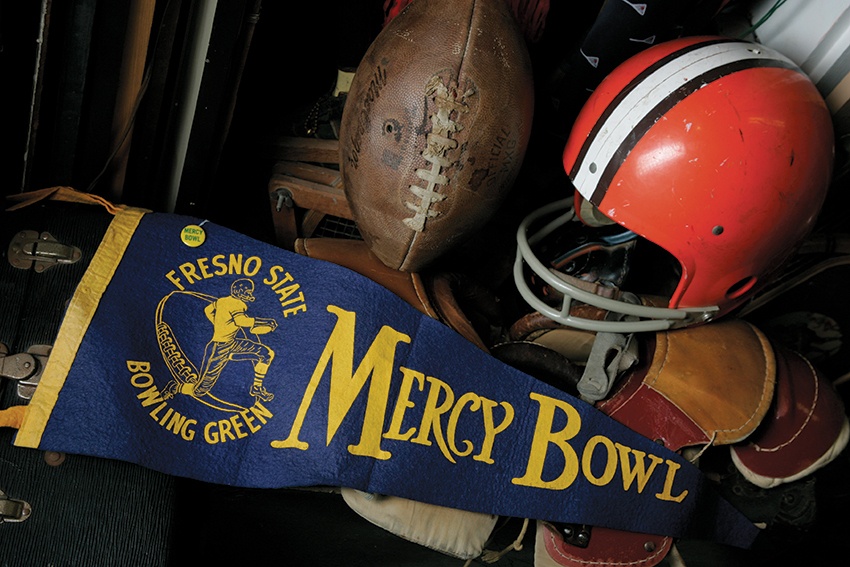 Through the decades, the Falcon football program has been led by 20 different head coaches, including some whose names are well known and revered in the collegiate ranks, such as Doyt Perry, Don Nehlen, Urban Meyer, Dave Clawson and Dino Babers. Bowling Green has produced 27 All-Americans, and more than 60 Falcons have been drafted by teams in the NFL, with dozens more signing free agent deals to play in the pros.

“Bowling Green has a reputation nationally as a highly respected school with a highly respected football program,” said Mike Wilcox, a 1975 BGSU alumnus and longtime Falcon Athletics booster. “That legacy is out there, as evidenced by the Hall of Fame coaches and the outstanding players that have been with us. Bowling Green has stood out as one of the best in the Mid-American Conference over the years.”

It was a very modest but ambitious beginning that put the foundation in place for Bowling Green Football. There were just 19 players on that ﬁrst team, but that was more than half of the male enrollment at the time of the institution then known as Bowling Green Normal School. Due to a shortage of footballs, the kickers and the quarterbacks could not practice at the same time. The games were played at the now gone Ridge Street School, with an admission price of 25 cents.

“That’s how this all got started, but that was obviously a very different time, in so many ways,” said Mickey Cochrane, the curator of the Athletic Archives at BGSU and former head coach of Falcon men’s soccer and lacrosse teams. 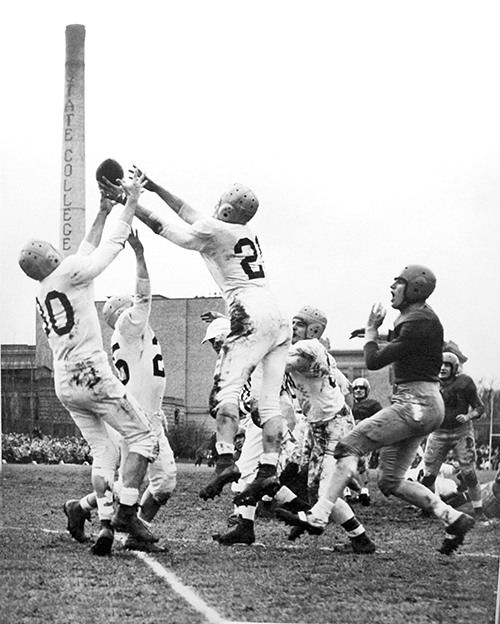 “There have been a lot of great players and great coaches that have been associated with the football program over those 100 years, and they are responsible for the rich history and solid reputation that Bowling Green Football has today.”

Charles Clucas played tackle on that ﬁrst Bowling Green football team and he was the heaviest player on the roster at 170 pounds. During the summer, Clucas would go to county fairs in the area and wrestle the local champions, and he prevailed in enough of those matches to pay his college tuition with his winnings. While returning from a game in Michigan, the players on the 1920 team missed the last trolley car from Toledo to Bowling Green and had to spend the night sleeping on the ﬂoor of an all-night eatery.

“There are so many interesting stories from over the years,” Cochrane said. “But it seems like it was always having good people involved that brought success and fame.”

The 1920 team recorded the program’s ﬁrst win, defeating Kent State Normal College 7-0 in the ﬁnal game of the season. Bowling Green joined the Northwest Ohio League the following year, but there were no fans on hand for the ﬁrst game in 1921 due to a ﬂu epidemic. The team that years later would be nicknamed the Falcons set a national scoring record that same season in a 151-0 win over Findlay College that saw BG score 22 touchdowns in the game.

From 1924-34, Warren Steller coached the Falcons to a 40-21-19 record and three league championships. From 1955-64, the legendary Perry took Bowling Green on the most successful run in program history, going 77-11-5 overall with ﬁve Mid-American Conference championships and that 1959 national title.

“I think that when Doyt was coaching here, that is when our tradition of winning and putting together one of the best programs in the MAC really got started,” said BGSU alumnus Tim Dunn ’85, a Bowling Green business owner and longtime Falcon booster. “Doyt was so well-respected nationally, and he was very close with Woody Hayes and Bo Schembechler and they used to come to BG and stay at his house. Doyt raised the bar on everything.” 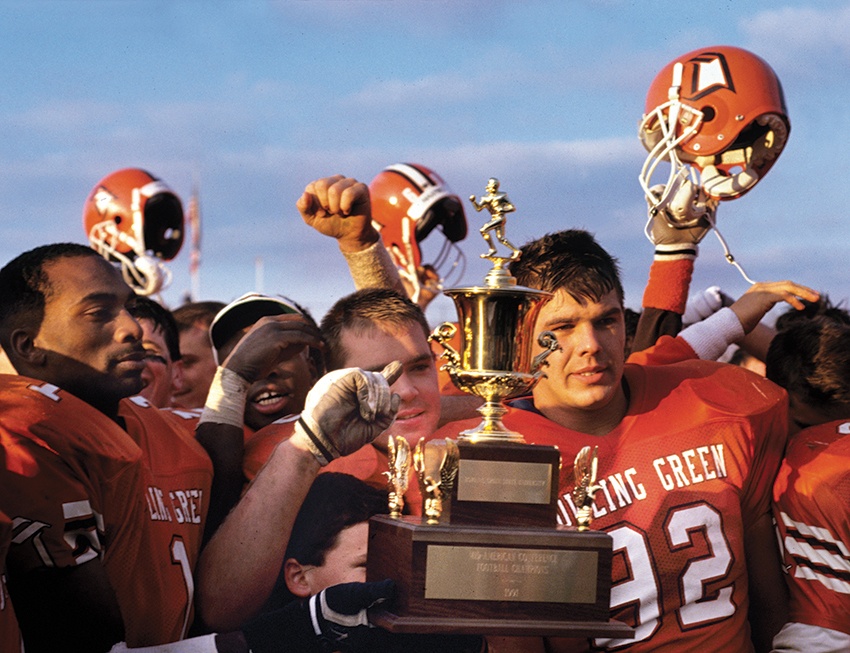 Meyer’s two years at BGSU produced a 17-6 record, a 10-1 mark at home, and road wins over Northwestern and Missouri. That strong start propelled him to one of the most successful coaching careers in college football that included winning three national championships.

The Falcons never shied away from playing against major powers, according to Dave Horger, who was the voice of the Falcons as the radio play-by-play announcer for many years. “BG would play anyone, no matter how big the name or the reputation,” he said.

“And the Falcons won some of those games, and played them really tough on a lot of other occasions. Bowling Green football has never backed down from anyone.”

Perry never lost more than two games in any of his 10 seasons at the helm of the Bowling Green program, winning Mid-American Conference championships in ﬁve of those seasons, ﬁnishing second three times, and third twice.

“Doyt Perry is a name that is recognized throughout the country, and he really elevated the proﬁle of Bowling Green in football and in a lot of other areas,” said Ken Schoeni, the former supervisor of maintenance and grounds for BGSU Athletics. Schoeni was in the early days of his lengthy career at the University when Doyt L. Perry Stadium hosted its ﬁrst game more than 50 years ago.

“His name belongs on that stadium,” Schoeni said. Horger said the ﬁnest hours of Falcon Football have also showcased outstanding players, and the group at the top of that list has to include Paul Miles, who when he graduated in 1974 was only the third player in NCAA history to have three consecutive 1,000-yard rushing seasons. Miles, who wore No. 29, is the only Falcon Football player to have his jersey number retired.

Miles was seventh on the depth chart at running back when he joined the BGSU football team, but ended his Falcon career as the school’s all-time leading rusher. Miles said playing in the early 1970s offered a bit of an escape from the protests, anti-war demonstrations and other hot button social matters of that period. 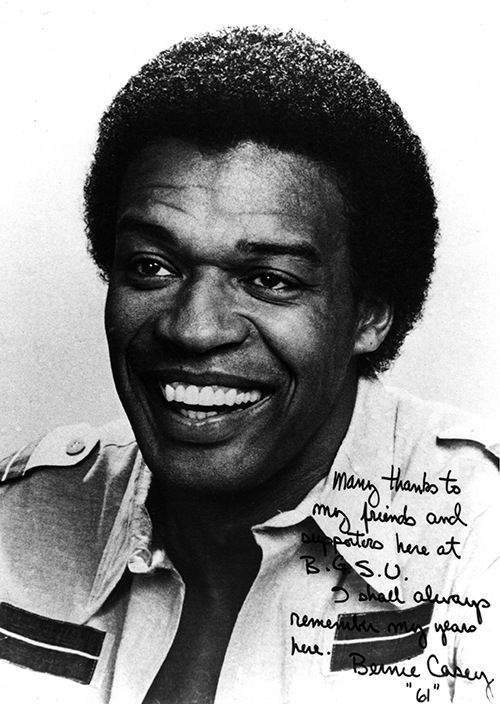 “It was a difﬁcult time, a very tense time, but I chose to take it out on the teams we played against,” Miles said. He had 3,239 yards in his three seasons and was the career rushing leader in the MAC following his senior year. Miles ranks third all-time at BGSU now, behind the four-season totals of Travis Greene’s 3,852 yards (2012-15) and Dave Preston’s 3,423 yards (1973-76). Preston had a ﬁve-touchdown game in 1974 against Dayton, and would later play six seasons for the Denver Broncos. Bernie Casey was an All-America running back on the 1959 championship team and the ninth draft pick in the 1961 draft — the highest a BGSU player has ever been drafted in the NFL.

Most of the passing and receiving records have been set in recent years in the era of wide-open, spread offenses and shotgun formations, but Bowling Green’s Brian McClure was a generation ahead of the trend. The 6-foot-6 quarterback threw for 10,280 yards in his four seasons leading the Falcons (1982-85), completing a school-record 900 passes and throwing for a then-record 63 touchdowns. He led BGSU to an undefeated regular season as a senior.

“That BG offense that McClure led was one of the ﬁrst to have ﬁve wide receivers on the ﬁeld and just throw the ball all day long,” Horger said. “To a certain degree, that might have been the start of a major change in college football.”

Some three decades later, Matt Johnson would throw for 4,946 yards and 46 touchdowns in the 2015 season while leading BGSU to a MAC championship. The defense has been led by many outstanding individual performers, including safety Martin Bayless, a former walk-on who was a four-year starter for the Falcons and set BGSU and MAC records with 27 career interceptions, the second highest total in NCAA FBS history.

Defensive end Phil Villapiano was one of the most decorated and famous Falcons as a three-year starter who earned ﬁrst-team All-MAC honors as a junior and senior and was the 1970 MAC Defensive Player of the Year. Villapiano was the 1971 AFC Defensive Rookie of the Year, a four time Pro Bowl pick, and played on the 1976 Super Bowl champion Oakland Raiders during his 13 year NFL career.

“It has been the quality of the people involved that have always made Bowling Green Football something special in the community and nationally,” said Joe Sharp, who followed his father, Glenn, as equipment manager for the football Falcons. Between the two, they spent close to 55 years in the program. “There’s been some ups and downs, but the attitude never changed. The players were like family.”

Mark Miller, an All-America quarterback (1974-77) at BGSU who then played for the Cleveland Browns and Green Bay Packers in the NFL, was associated with the Falcon program across three decades, as a player, a coach and then as the color commentator for the football radio broadcasts. Miller said the Falcon players maintain a close bond with the University, no matter the era.

“The history was in place before I got there, since the likes of Doyt Perry put Bowling Green on the national map, but football has always been a rallying point for the University,” Miller said. “No matter where the former players and coaches go, they always remember BG and how much they love the place and the people. They treasure the time they were here.”

“Once you are a part of Bowling Green Football, you are a Falcon for life,” he said. “Players and coaches eventually leave, but they all bleed orange and brown for the rest of their lives.”