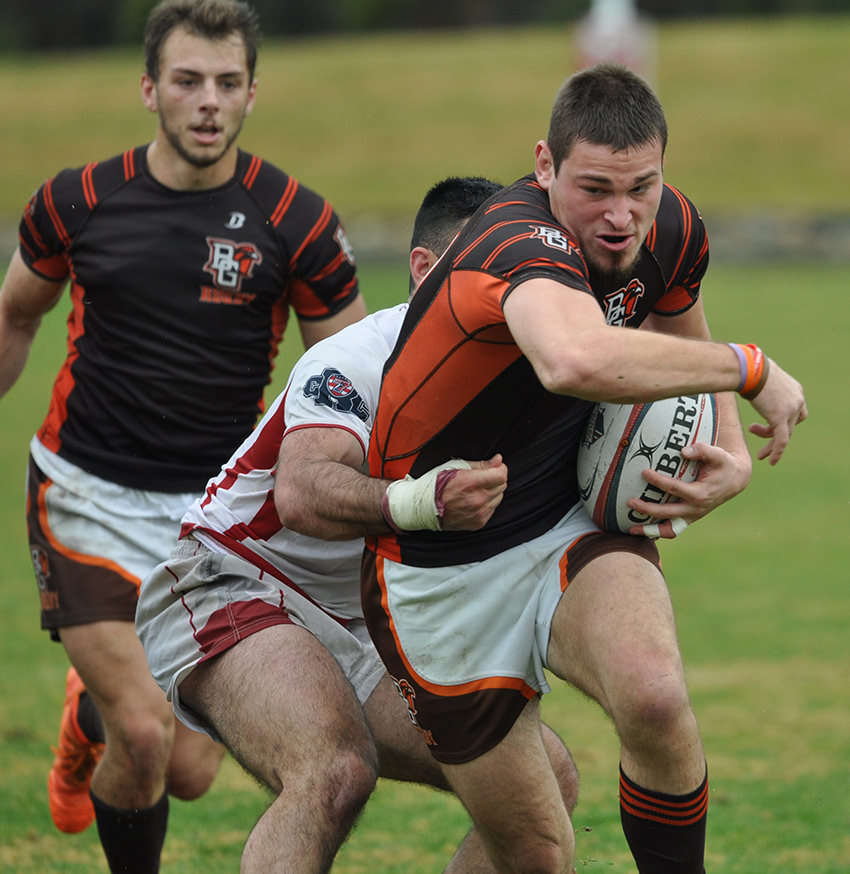 "It's pretty good timing. It's been an amazing year with the 50th anniversary. It was a good way to cap it off, obviously," Head Coach Tony Mazzarella said on the team winning its first fall championship. "We had everyone healthy, and we were playing at the top of our game.

"I told the team to just the play same game we had played in the semis. Play a disciplined game and play simple rugby — don't do anything fancy and just do the basics with the conditions (slick grass and a mist). I said it was their time — just go out and take it."

BGSU (9-3) scored first to make it 7-0 when Sam Ciancutti dove over and Chris Labadie with the conversion. Later, flanker Ryan Steinmetz intercepted a pass and was in under the posts and Labadie converted for a 14-0 lead. Steinmetz also blocked a kick that was recovered for a hooker Phil Bryant try.

"This was unreal," Steinmetz said. "We had our ups and downs all season, but we know we were good. It was about time for all of it to come together.

"Our cover defense was hitting the marks all day. If they broke through the first line, there were 2 or 3 guys right there to close the hole."

Prop Dominic Bodnar said, "We knew we had to take their fly half (Noah Niumataiwalu) out of his rhythm because he controlled their offense. It was Ryan's (Steinmetz ) job to dog his every move. They may have held on to the ball for 15-20 plays in a row but was all horizontal movement, nothing substantial towards the goal line. His frustration got him kicked out of the game."

In the second half, Phil Bryant and Zachary Miller scored to put the game away.

The Falcons defense smothered the Hawks all game, with their only scoring coming from an interception.

Center and team captain Bob Kiskin said, "All season, we've had a lot of energy and a lot of focus. Anybody that has watched us all season knows our defense hits hard. This whole thing so surreal. The game seemed to go by so fast."

"Going into the playoffs as an underdog was a huge motivating factor," Operations Manager Roger Mazzarella said. "The guys knew they were good and they set out to prove it."

"There are some alumni — Joe Campisi, Jim Haynes, Mick Dwyer and Ken Ladik — that have followed us around the country all these years for these playoff games. I'm glad we finally rewarded their loyalty."