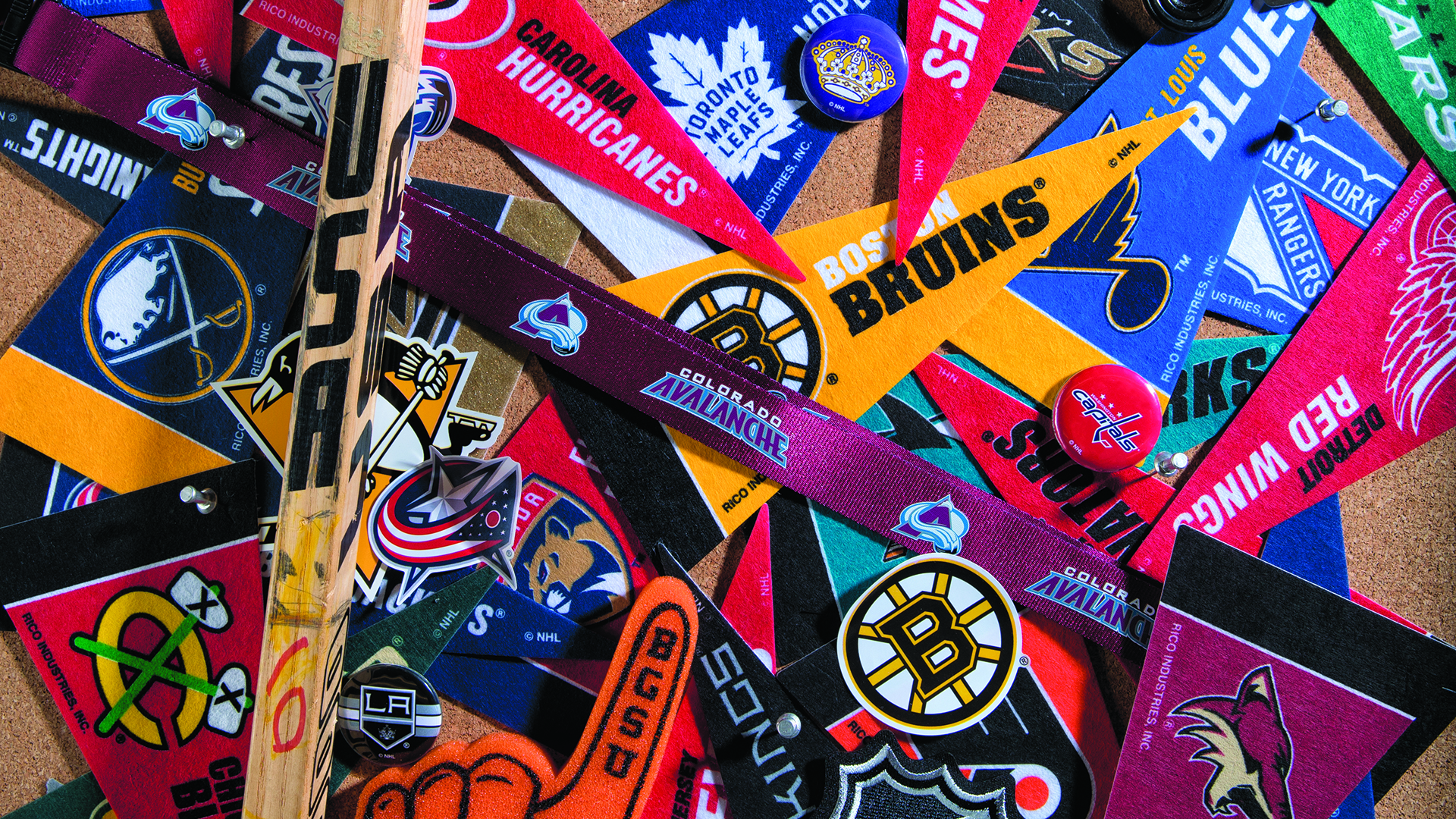 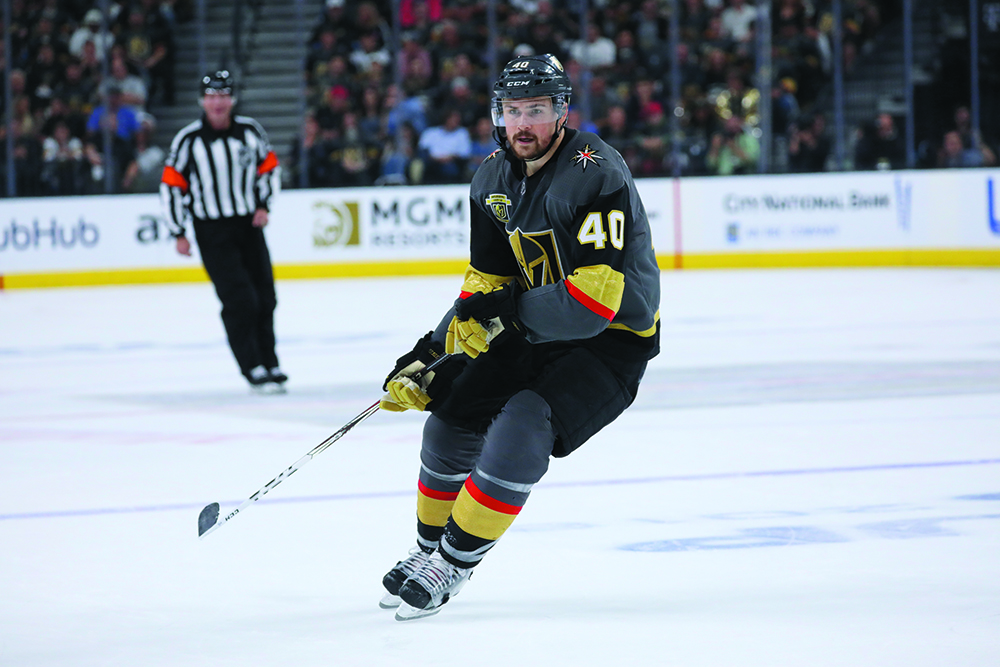 Ice cred. Credibility in a sport played on a frozen floor while in the endless pursuit of a vulcanized rubber disk — that’s how you would best describe the reputation of a college hockey program that has produced the current general managers for three NHL franchises, the new head coach of the defending Stanley Cup champions, the former head coach of a previous Stanley Cup champion and current assistant coach of the Detroit Red Wings, the director of player personnel for the Los Angeles Kings and more.

The Bowling Green State University Falcons, with a rich history in the college ranks and a national championship banner hanging in the rafters at Slater Family Ice Arena, also have a significant presence at the highest levels in the professional game.

“With all of those Bowling Green guys working at the top of the NHL, what that tells me is that you can come here and then go anywhere,” said longtime Falcon booster Scott Slater, whose family name adorns BGSU’s arena. “This can be a stepping-stone to wherever you want to go in your career, in hockey or elsewhere.”

The Falcons are heavily gifted with that ice cred. Very likely there isn’t another college program out there with BGSU’s level of representation in the NHL board rooms and coaching offices.

Former Falcon All-American Brian MacLellan is the general manager of the 2018 Stanley Cup champion Washington Capitals. The new head coach of the Caps is former Falcon Todd Reirden, who had been a top assistant with the franchise since 2014.

The Vegas Golden Knights, Washington’s opposition in the Stanley Cup Finals, have BGSU Hobey Baker Award winner George McPhee as their general manager and president of hockey operations. The Los Angeles Kings place their fortunes in the hands of former Falcon Rob Blake, who serves as general manager and vice president of the franchise, while the Kings’ director of player personnel is BGSU product Nelson Emerson.

The Falcon program has produced at least 35 NHL players over the years, including six who were part of a Stanley Cup championship, and current Vegas center Ryan Carpenter, whose BGSU career ran from 2011-14. Dan Bylsma, now an assistant coach with the Red Wings, is the former head coach of the Buffalo Sabres and the Pittsburgh Penguins, leading that franchise to the Stanley Cup championship as head coach in 2009.

BGSU can even claim the lead announcer of the NHL broadcasts on NBC with Emmy Award winner Mike Emrick, who earned his nickname “Doc” while getting his Ph.D. at the University. Emrick, who has been in the booth for hockey since calling Falcon games in 1971, was the voice of the NBC broadcasts for the Stanley Cup Finals.

When Reirden was promoted as head coach of the Capitals, the growing Falcon imprint on the NHL caught the attention of many. The Baltimore Sun referred to the move as part of the “Great Bowling Green NHL Takeover.” That was a particularly proud moment for the school, and all of those former Falcons, Reirden said. 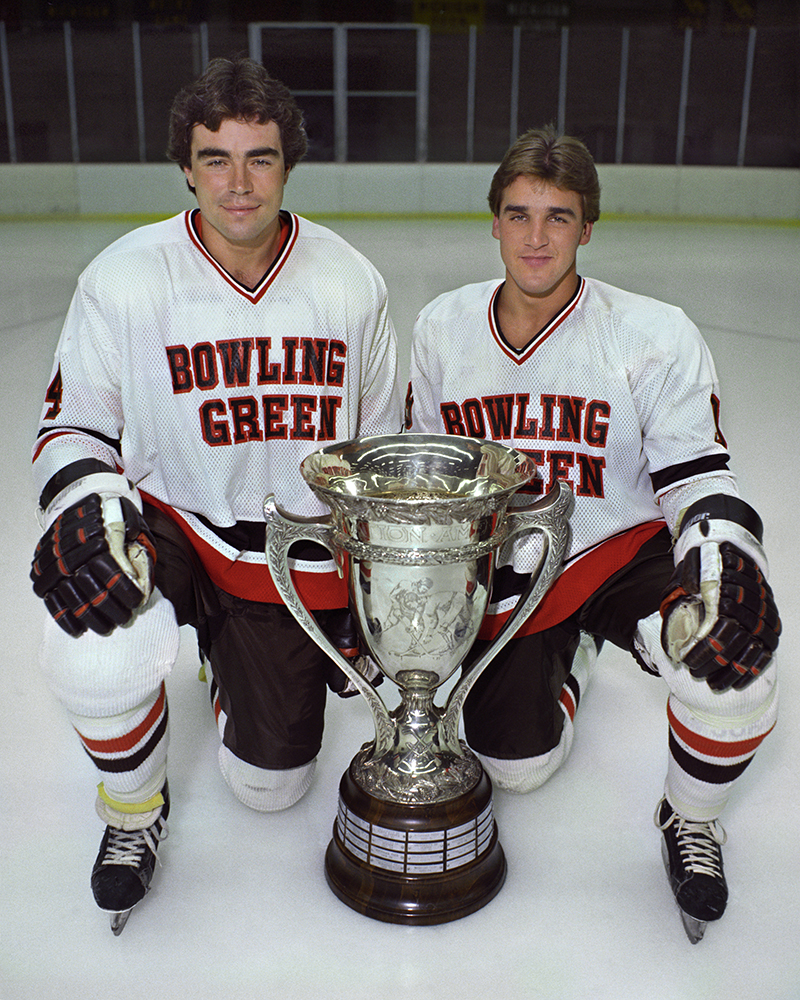 “It all culminated in the Stanley Cup Finals, with George McPhee there leading Vegas and Brian MacLellan leading the Caps and myself involved as associate coach with the Caps, so it was a Bowling Green reunion and a lot of people took notice,” Reirden said. “But I don’t think this is anything shocking — hockey players and hockey people built that place, so it makes sense that Bowling Green would produce hockey professionals.”

Reirden, who posted 76 points from 1990-94 in his 140 games as a Falcon, started his career at BGSU as a walk-on. He would go on to play professionally for 13 seasons, including eight in the NHL. After proving himself at every rung on the hockey coaching ladder, he was the only person the Capitals felt they needed to interview to fill their head coaching vacancy.

“I think Bowling Green prepared me well for a career in this sport,” Reirden said. “It’s a unique environment there to be a part of as a hockey player. It’s the perfect mix of a good education at a smaller school with very competitive hockey, and tremendous community support.”

Blake, likely the finest defenseman in BGSU hockey history, credits that same background with preparing him to both compete and work at the highest echelon of the sport. As a Falcon, he had 104 points (39 goals, 65 assists) with 18 power-play goals and three game-winners in his 131 games in a Bowling Green uniform. He logged 368 penalty minutes in his career, and was honored as an All-American and a Hobey Baker Award finalist. He helped Team Canada win a gold medal in the Olympics, and won a Stanley Cup with Colorado during his 20-year NHL playing career, and a second Cup as a member of the Kings’ front office.

“I’ve pretty much been focused on this every day since I got to Bowling Green,” Blake said about making hockey a career. “I wasn’t sure where the path would take me, but this is kind of what I hoped to do, and the foundation I had in place when I left Bowling Green was tremendous.”

He was drafted by the Kings and spent 11 seasons playing for the franchise, winning the Norris Trophy as the top defenseman in the NHL in 1998. Blake, who was a teammate of former Falcon Greg deVries for Colorado’s Stanley Cup championship season in 2001 and now works with Emerson, a three-time Hobey Baker Award finalist as a Falcon, enjoyed seeing a pair of other former Falcons square off as GMs in this year’s finals.

“To see two Bowling Green guys in the Stanley Cup Final was really good for the school and the hockey program,” Blake said. “I don’t know that there is that one thing that makes Bowling Green special, but I think the coaches and the community played a big role. When I was at Bowling Green, I matured as a person and developed the discipline that has served me well in my professional career.”

Blake credited former BGSU Head Coach Jerry York with sculpting players who would be successful in whatever career path they chose.

“Coach York was very detail-oriented, and he brought in 17- or 18-year-old kids knowing he had four years to prepare them for their lives ahead. He wasn’t just making you into an NHL-caliber player, he was going to make you a good person for the rest of your life. He deserves a lot of credit.”

McPhee also played for York, leading the Falcons in scoring as a freshman when he racked up 88 points and won Central Collegiate Hockey Association Rookie of the Year honors. He scored 114 goals and had 153 assists in his career for 267 points, and was honored as an All-American along with winning the 1982 Hobey Baker Award as college hockey’s top player. 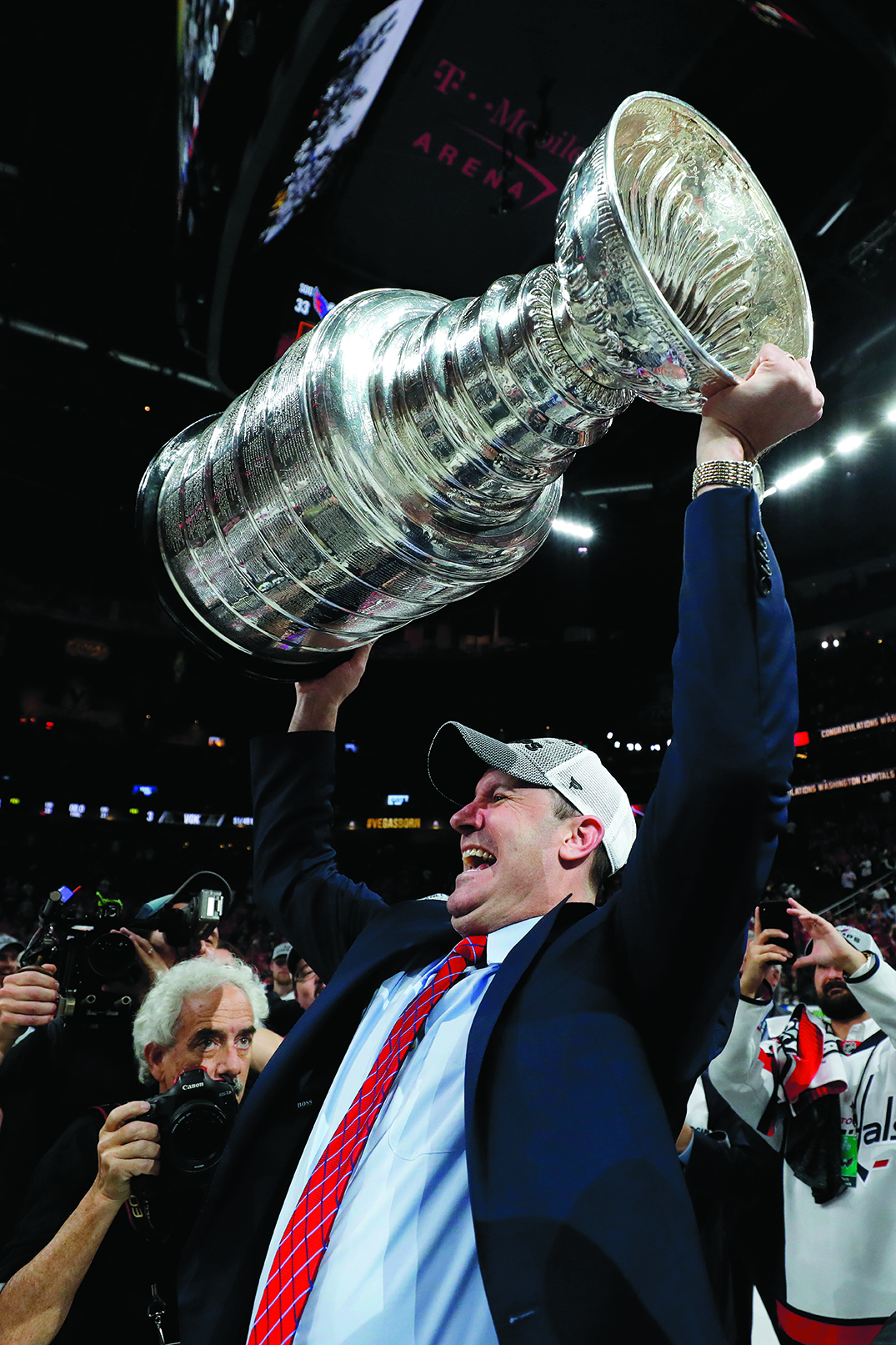 McPhee, who played seven seasons in the NHL, was called up for the 1983 Stanley Cup playoffs by the New York Rangers. He scored three goals in a playoff game before ever playing in a regular-season NHL game. McPhee said most of the Falcons in the top tier of the NHL today are products of a time when the Bowling Green program was regarded as one of the best in the nation.

“BGSU was an elite hockey school in that era, and the program produced some people who got to the NHL and deserved to be in the NHL,” he said. “Fortunately, Coach Bergeron has the program headed back in that direction.”

McPhee, who spent 17 years as the general manager of the Capitals and drafted NHL superstar Alex Ovechkin, attended law school after his NHL playing days ended, and then set out on a career in upper management. His role in building the expansion Vegas franchise into a Stanley Cup finalist in its first season made him the runaway choice for the NHL’s General Manager of the Year award.

“Near the end of my playing career, I started thinking about the rest of my life and hoping that I could stay with hockey in some fashion,” said McPhee, whose communication degree from BGSU has served him well in his many years as a GM. “My first stepping-stone in that process was going to college and earning a degree. The personal experiences I had at Bowling Green, along with the requisite hockey experience, laid the foundation. When I first got hired in the NHL, they were looking for someone who was a self-starter. I’ve always been that guy. There’s not many days when I don’t wake up anxious to go to work.”

That drive is shared by MacLellan, who was a teammate of McPhee going back to their junior hockey days in Guelph, Ontario. They stayed connected when they both came to Bowling Green, and they both were inducted to the Bowling Green Athletic Hall of Fame in 1987.

MacLellan, who won a Stanley Cup with the Calgary Flames during his 10-year NHL playing career, was hired as a scout by his former roommate McPhee while McPhee was the GM of the Capitals. MacLellan had gone to graduate school and prepared for a career in finance before he got the call from his Falcon teammate.

“We’re really good friends and we’ve grown up together,” said MacLellan, who was a two-time captain for the Falcons and an All-American at BGSU. He called the fact that he and McPhee served as general managers for the opposing teams in the Stanley Cup Finals “a little awkward,” but apparently it was nothing that would threaten the bond with each other, and with Bowling Green.

“These guys all love Bowling Green and are extremely loyal to the program, and to each other,” said current BGSU Head Coach Chris Bergeron. “It’s the people here that create that connection, because they are just so genuine. These guys think back on the winning and the championships, but when you talk to them, their stories are about the people they met here, the life experiences they had and the growing-up process.”

Bergeron said that when he speaks with the former Falcons who now sit in the board rooms of the NHL, they don’t mention their individual awards or accomplishments as college players.

“They talk about the relationships and the people they knew at Bowling Green,” he said. “The people that took them in for Thanksgiving dinner and made them feel like part of the family. For me, coming in from the outside, that’s been the best part of the job here — seeing the people involved with this program and knowing that’s why these guys feel the way they do about Bowling Green. There’s no secret formula — it’s the people. And that’s something you can’t fake or pretend.”

At the next meeting of the top brass from the teams in the NHL, it might be a good idea to splash a little orange and brown décor around the room. It will be quite familiar to a number of the participants, since Bowling Green played a significant role in shaping the coaches, management and staff of some of the franchises.

“I’d never be able to accomplish anything now without the foundation that was built while I was at Bowling Green,” Reirden said.