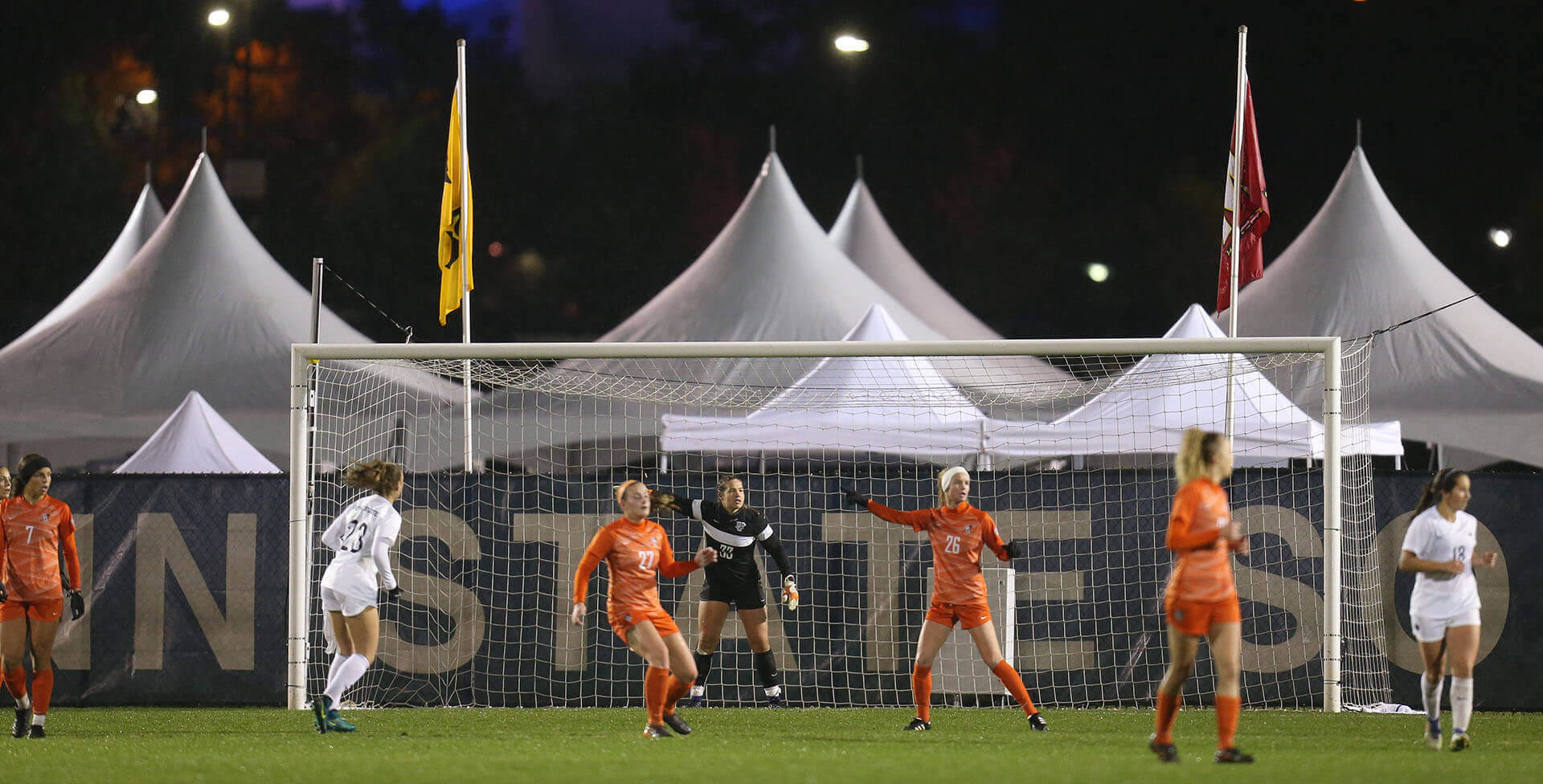 When senior Erica Hubert scored the 40th goal of her storied collegiate career, she also scored the first NCAA Tournament goal in BGSU Women's Soccer history. Despite that first-half goal, the Falcons fell to host Penn State University 4-1 on Friday night (Nov. 9). The first-round contest in the national tournament was held at Jeffrey Field in University Park, Pennsylvania.

The Falcons (14-5-3), who tied the school single-season record for wins and set new records for fewest losses and highest winning percentage (.705) in a season, see the 2018 season come to an end. With the win, the No. 14 ranked Nittany Lions (16-5-1) advance to next weekend's second round.

The hosts scored twice in the first 14 minutes of the match, marking only the second time this season BGSU allowed two or more goals, but the Falcons then righted the ship and went toe-to-toe with the Nittany Lions over the remainder of the period.

Hubert's goal came at the 20:38 mark. Redshirt sophomore Nikki Cox slid the ball ahead to the fifth-year senior on the right side of the field, and Hubert uncorked a hard shot toward the top of the goal. PSU goalkeeper Amanda Dennis tipped the ball with a leaping effort, but was unable to push it over the crossbar, and it landed across the line.

Cox was credited with the lone assist on the goal, the first NCAA Tournament goal in program history. Charlotte Williams had a goal and an assist for the hosts, while Alina Ortega-Jurado, Marissa Sheva and Emily Ogle also found the back of the net. BGSU junior Kathleen Duwve made three saves in goal, before giving way to Victoria Cope for the final 5:45 of the match.

Coach Matt Fannon and the Falcons have nine seniors on the 2018 roster. One of them, Morgann Williams, missed the bulk of the season due to injury, but the other eight — Morgan Abbitt, Elisa Baeron, Laura Bozzelli, Cope, Alexis Fricke, Hubert, Jennifer Reyes and Marissa Swindell — were on the field together for the final moments of the match.

Three of those seniors — fifth-year Falcons Baeron, Hubert and Reyes — joined the BGSU program mere months after the team finished a winless 2013 season. That trio and their teammates helped the Brown and Orange to a total of 27 wins over the past two seasons.

Be sure to visit bgsufalcons.com in the coming weeks for end-of-season superlatives and other information from the storied 2018 season. You may also follow Falcon Women's Soccer on Twitter (@BGAthletics and @BGSUWSoccer), Instagram (bgsuwsoccer) and Facebook (bgsuwsoccer).