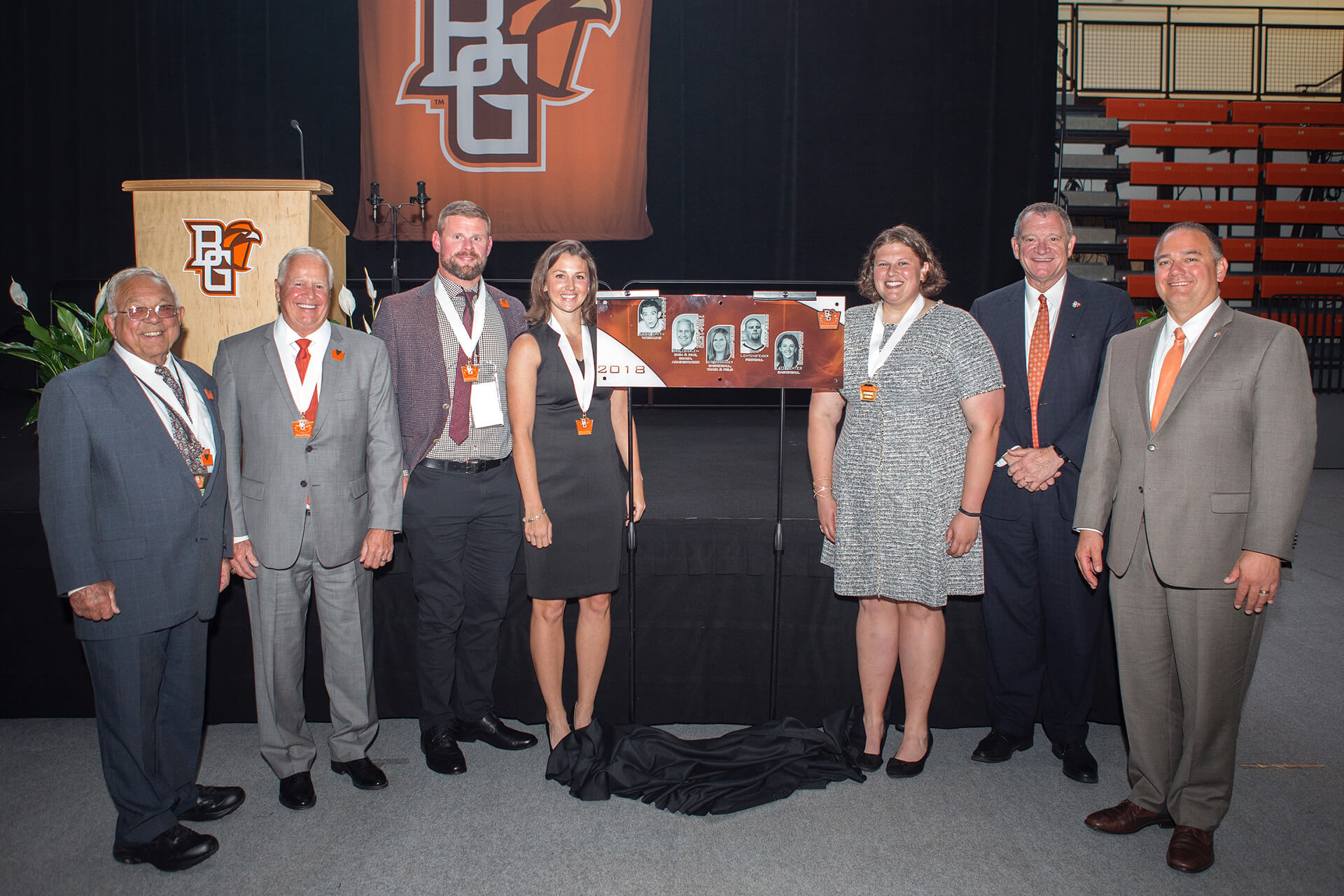 Bowling Green State University inducted five former Falcons into its Athletics Hall of Fame on September 21 at the Stroh Center.

“Congratulations to the newest members of the BGSU Athletics Hall of Fame,” said Bob Moosbrugger, BGSU director of athletics. "Kate, Liz, Kory, John and Dr. Zwierlein are fine examples of what it means to be a student-athlete, administrator and coach. We appreciate their contributions to the history of BGSU Athletics. I would like to thank and congratulate the Hall of Fame selection committee for these excellent selections as we ‘Honor the Past.’”

Achter helped the BGSU women's basketball team to four Mid-American Conference regular season titles, three MAC Tournament crowns and four national postseason appearances from 2004-08, including the 2007 Sweet Sixteen. During her four years, BGSU compiled a record of 108-23. She is the only player in school history with 1,000 career points and 600 career assists. As a senior, she was the MAC Player of the Year.

We appreciate their contributions to the history of BGSU Athletics.

Honegger was a teammate of Achter's, competing in basketball from 2003-07. She also won a MAC Championship in the discus, competing on BGSU's Track & Field team as a freshman. Honegger started a school-record 127 games during her career and the program went 103-25 in her four years, advancing to the championship game of the MAC Tournament in each season and the Sweet Sixteen in 2007. She ended her BGSU career as the only player in Division I to hold school records for 3-point field goals made and blocked shots. She scored 1,522 points and had 903 rebounds.

Lichtensteiger was a two-time, first-team All-MAC center on BGSU's football team from 2004-07 and two-time second team All-MAC at guard. He was a 2007 Rimington Trophy Finalist and a semifinalist for the Draddy Trophy, given to the best college football player, with an emphasis on academics, community service and on-field performance. A two-time Academic All-MAC player, Lichtensteiger was selected in the fourth round of the NFL Draft by the Denver Broncos and played in 75 NFL games over nine seasons.

Smith was a member of the heritage sport of wrestling at BGSU from 1955-59, compiling a record of 41-3 in his career. He was team captain of the first undefeated and MAC Championship team in 1959, which completed the season 11-0, while Smith captured the MAC Championship at 137 pounds. He was a finalist at the U.S. Olympic Trials in 1956 and spent 30 years as a wrestling coach, compiling a mark of 193-72-2. Smith was inducted into the Ohio Wrestling Hall of Fame (1989), Whitmer High School Hall of Fame (2004) and Sylvania High School Hall of Fame (2009).

Zwierlein and Hall of Famer Doyt Perry are the only two individuals to ever serve BGSU as a student-athlete, coach and athletics director. He was a member of the heritage sport of men's swimming from 1964-68, earning three varsity letters and being named team captain as a senior. Beginning in 1981, he was the head coach of the men's and women's swimming and diving programs, leading the women to three consecutive MAC runner-ups. In July of 1994, Zwierlein was named director of athletics and served in that role for five years. He started the women's soccer program and hired the first African-American head coach in department history, both among his many notable achievements. Zwierlein is a recipient of the AFCA's Lifetime Achievement Award and notably donned the Freddie Falcon costume as a student.