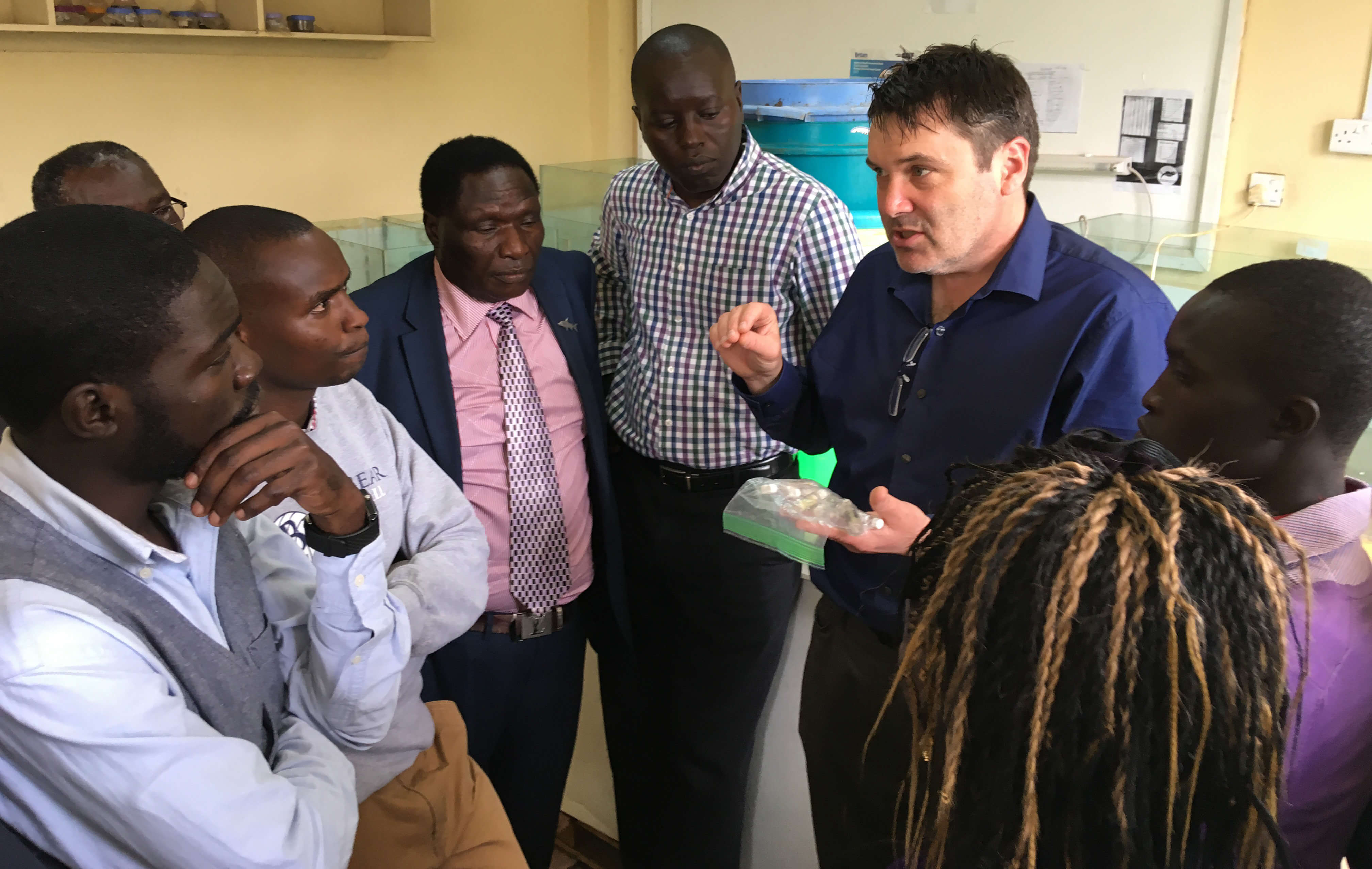 The bright green water in the bay was all too familiar to the visiting scientists from Bowling Green State University. It indicated a harmful algal bloom (HAB). But, instead of Ohio’s Lake Erie or Sandusky Bay, this bloom was in Kisumu Bay in Kenya’s Lake Victoria. As scientists have discovered, toxic algae know no national or geographic boundaries and can cause problems wherever conditions are favorable.

Aboard the Kenya Marine and Fisheries Research Institute (KMFRI) research vessel in April were BGSU biologists Drs. George Bullerjahn, Timothy Davis, Michael McKay and Jeffrey Miner, along with Dr. Kefa Otiso, an urban geographer in BGSU’s School of Earth, Environment and Society who is originally from Kenya and previously conducted urban environmental research in Lake Victoria’s catchment basin. Working alongside researchers from KMFRI and nearby Kisii University, Bullerjahn, Davis, and McKay collected water samples from the lake and some of its feeder rivers while Miner caught a number of fish including the invasive Nile perch for further study.

The BGSU researchers were in Kenya this spring for a special joint symposium on water quality at Kisii University in southwest Kenya, a collaboration facilitated by Otiso. Titled “Bridging the Gap: Current State of the Science and Future Research Opportunities between the North American and African Great Lakes,” the symposium allowed researchers from BGSU, Kisii University, Egerton University and KMFRI to discuss harmful algal blooms and the challenges facing sustainable tourism development around Lake Victoria.

“All five of us presented our work at the symposium, along with colleagues from Kisii and KMFRI,” McKay said.

“Unsurprisingly, we detected high levels of microcystin toxin (the toxin that caused the 2014 Toledo water crisis), and trace amounts of saxitoxin (a neurotoxin that can cause Paralytic Shellfish Poisoning in marine environments),” Bullerjahn said. “We were able to show students as well as faculty the results of the harmful algal analysis and demonstrate the toxin assays.”

Both Kisumu, which gets its water from Kisumu Bay and Lake Victoria, and Toledo, whose water comes from western Lake Erie, have undergone water shutdowns due to high levels of toxic algae. “In the U.S. in the last 10 years at the regional water plants, it’s become quite routine for plant operators to test samples regularly. But in Kenya the technology has not been widely available and is expensive. It was nice to share these kinds of approaches with the students and faculty,” McKay said.

“The good news is that we have obtained a lot of knowledge about water quality issues in the United States and we can work with colleagues in that area to improve their water quality,” said Davis, who is part of the BGSU team focusing on water issues here and abroad. “Millions of dollars have been spent on understanding harmful algal blooms in North American Great Lakes. If we can take the knowledge we’ve obtained by doing all this research here and see how it applies there, it will improve the science and the lake quality, as well as increase understanding and education, as both of these critically important global socioeconomic systems are experiencing many of the same issues.”

The U.S.-Kenya connection is vital because about 40 percent of the Earth’s surface fresh water is held collectively in the great lakes of North America and Africa, two of Earth’s most important available surface freshwater systems, Davis said. The lakes’ health is critical to the socioeconomic systems of both continents and the well-being of the populations.

“The interdisciplinarity of all this research is very important,” Otiso said. “We need big teams to attack issues from a wide variety of perspectives. Most of the problems we are dealing with these days are global in nature – they don’t respect national boundaries. Cross-cultural research exchanges are therefore necessary.”

Another important goal of the visit was to meet with Vice Chancellor Akama and KMFRI administrators to discuss possibilities for BGSU graduate students to come to Kisii, Kisumu and other Kenyan locations to study HABs for their theses or dissertations and to expand their professional networks. To help provide funding for that, Davis is preparing a grant proposal for a three-year National Science Foundation program designed to bring graduate students from the United States to international locations to make connections and strengthen their dissertations by conducting parallel research.

Because of Kenya’s tropical climate, Lake Victoria and Kisumu Bay experience algal blooms throughout the year. BGSU’s new winter session will thus be the perfect time for students to visit and conduct experiments, Davis said.

“Our group has done work in Hungary, Germany, the Netherlands, China and Russia, but this is the first time we can establish a formalized agreement with an institution in Kenya so students can go to Africa,” McKay said.

“It was very useful in that we spoke to Dr. Njiru, who is the director of all of KMFRI,” Bullerjahn said. “KMFRI is based in on the Kenya coast in Mombasa but has offices throughout the country including the major one in Kisumu on the lake. They have good infrastructure and a top-notch research vessel. They’re interested in pursuing a collaboration and a memorandum of understanding with BGSU. That will be an important component of our NSF proposal.”

“Also, the faculty and students at Kisii are very keen to improve their research portfolio and have relationships with international faculty,” Davis said. “It will be good for the university and for the overall science they want to conduct.”

Kenya and Lake Victoria share the same environmental problems as our Great Lakes regions, but there is also a general lack of awareness and understanding on the part of the public about the role played by human interactions with the environment. It’s more difficult for the electorate to make connections between land use and water quality for a variety of reasons, Otiso said.

A major difference between the U.S. and Kenya is that Kenyans do not see waterways as a recreation areas to the same degree as in the U.S., hence the relative underutilization of Lake Victoria for recreation. Moreover, since African rivers, including the Nile and the Congo, are generally unnavigable because of their shallowness, intense rapids and high waterfalls, they are of much less use as transport than U.S., European and Asian rivers, which has been a major contributor to Africa’s economic underdevelopment.

“The turbulent nature of many African rivers has contributed to the cultural perception that water bodies are dangerous, except in coastal and lake areas,” Otiso said. “Even then, Africa’s oceans and lakes are primarily used for fishing. Culture is a confluence of the physical environment and the humans around it. It determines how you see resources and how you use them.”

The BGSU-Kisii University collaboration also opens new avenues of research for many BGSU faculty, including the senior biologists.

“We’ll be using the data from the samples we collected on the Kisumu Bay cruise to do high throughput, next-generation DNA sequencing to identify all the organisms in the water and all the toxic organisms,” Bullerjahn said. “Since this is new knowledge, we’ll be submitting a manuscript for publication with our Kisii colleagues as a pilot study to attract future research funding. So little is known about the microbes in Lake Victoria that if can identify all the microorganisms present, it will yield an excellent initial publication.”

The partnerships between BGSU and Kisii University came about because of Otiso, who is from the area and was twice the recipient of Carnegie African Diaspora Fellowships. In 2015, he won the inaugural award and returned to Kisii University to help develop the geography curriculum. Then in 2016, he received the Carnegie African Diaspora Alumni Fellowship. Both were aimed at creating opportunities to engage in summer geographic research, curriculum development, and graduate student training and mentoring at Kisii University.

During his first fellowship, Otiso initiated a BGSU-Kisii University MOU to create additional research and study abroad opportunities in Kenya for BGSU faculty and students.

Kisii representatives later visited BGSU in May 2017 and toured the biology department, facilitated by Dr. Marcia Salazar-Valentine, director of International Programs and Partnerships, who always makes it a priority to connect the BGSU team with international visitors who also have interests in water quality, McKay said.

“And the parallels between Lake Erie and Victoria are so strong,” McKay added. Both lakes are shallow and turbid, and both are affected by human activity — agricultural runoff in Lake Erie and sewage in Lake Victoria, both of which serve as nutrients for harmful algae.

“Sewage is composed of nitrogen and phosphorous, just like here, where manure is used as a fertilizer by the agricultural community, or in a heavy rain event a sewage overflow happens. Many of the rivers in Kenya get untreated sewage that feeds into the lake,” Bullerjahn said.

Like Lake Erie, Lake Victoria is plagued with invasive species. It has the water hyacinth, which chokes off the water and makes navigation near-impossible, and the Nile perch. “The fish is a classic example,” said Miner, a specialist in fish ecology and invasive species. “It was introduced as a larger fish for fishing purposes but it eats up everything, including the indigenous cichlids.”

Davis, who previously worked at the National Oceanic and Atmospheric Administration, has some prior experience with African water quality issues. In 2015, he was part of the American contingent of the Great Lakes to Great Lakes initiative led by Wisconsin Sen. Russell Feingold, who was appointed special envoy to the African Great Lakes region by then-Secretary of State John Kerry. Meeting in Tanzania on the shore of Lake Tanganyika, scientists, academics and policymakers from the United States and Canada engaged in an in-depth exchange with colleagues from countries around the African Great Lakes to discuss the challenges involved in the management of the North American and African Great Lakes, including threats to fisheries, harmful algal blooms, invasive species, pollutants and climate change.