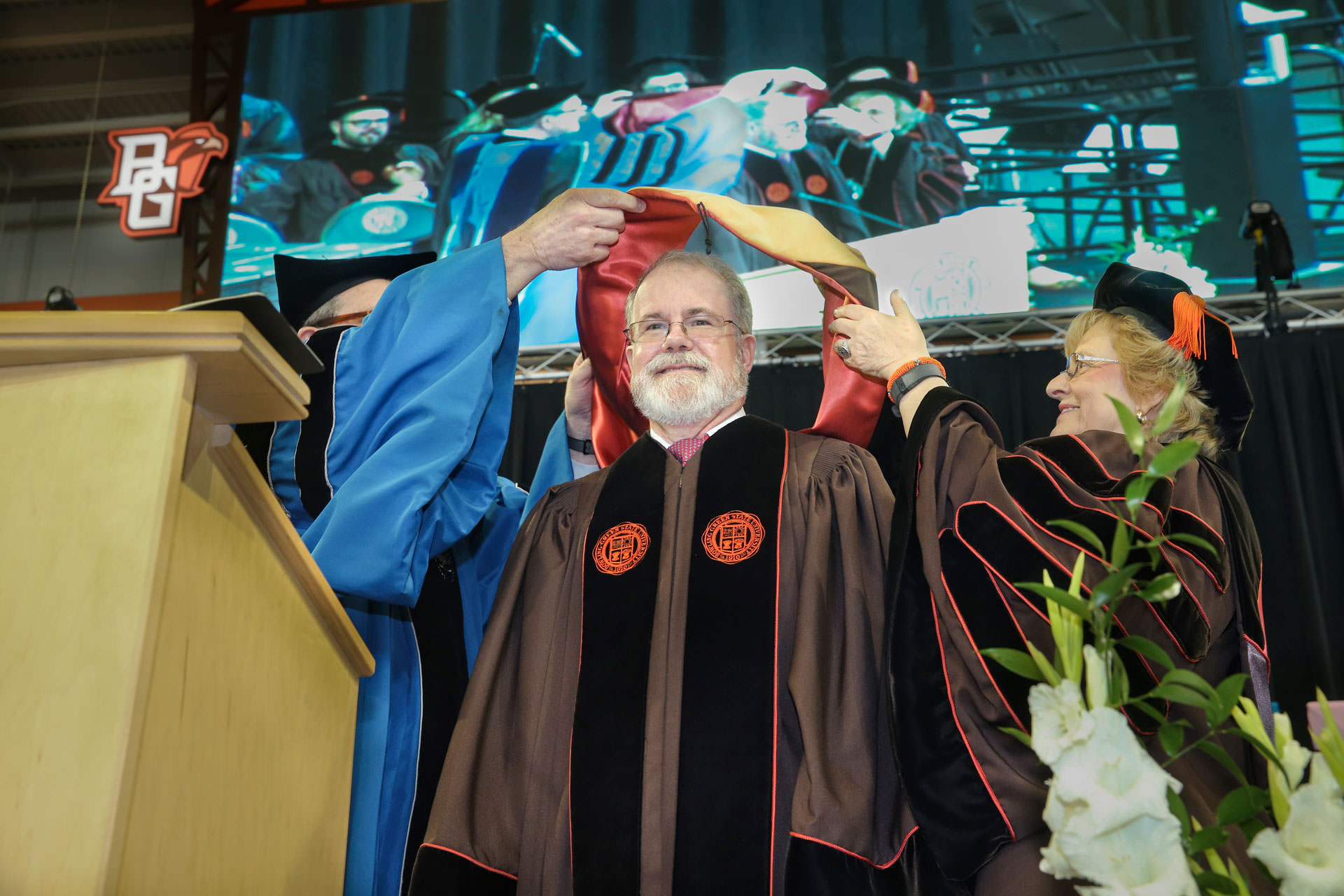 ‘This University is home to me’

Dr. William (Bill) Easterly is one of the most cited economists in the world, and he takes great pleasure in proving that the East Coast doesn’t have anything on the Midwest when it comes to intellectualism.

“One thing you end up being a part of when you’re from Bowling Green, and spending much of my career on the East Coast, you unintentionally become part of this cultural war between the Midwest and East Coast,” said Easterly, who received his Bachelor of Arts summa cum laude from Bowling Green State University in 1979. “I think the East Coast has a very condescending, patronizing and insulting view of the Midwest and I guess I feel like I am an ambassador of Bowling Green to let them know that people from here, we’re just like you and we don’t fit the condescending stereotypes people on the East Coast have.”

Easterly was honored at BGSU’s Arts and Sciences commencement May 6 with an honorary doctorate of social sciences.

“It’s a wonderful feeling,” said Easterly, acknowledging his pride of being honored by BGSU. “This University is home to me and it’s been home to my family. My father was a professor here; he came to BGSU the year I was born. I was completely a child of BGSU and the town of Bowling Green. I think of it as my home and to be recognized by my hometown, my home university, is a great honor and a great pleasure for me.”

“This University is home to me and it’s been home to my family. My father was a professor here; he came to BGSU the year I was born. I was completely a child of BGSU and the town of Bowling Green. I think of it as my home and to be recognized by my hometown, my home university, is a great honor and a great pleasure for me.”

A professor of economics at New York University and co-director of its award-winning Development Research Institute, Easterly is the author of best-selling books, including “The White Man's Burden: Why the West's Efforts to Aid the Rest Have Done So Much Harm and So Little Good” (2006). Foreign Policy magazine named him one of the world’s Top 100 Public Intellectuals in 2008 and 2009. He won the Adam Smith Award from the Association of Private Enterprise Education in 2013. In 2014, Easterly appeared on Thomson Reuters’ list of Highly Cited Researchers and Science Magazine’s top 100 Science Stars of Twitter. Today, he is among the 100 most cited economists in the world.

Easterly grew up in Bowling Green, where his father, Nathan William Easterly, was a biology professor at BGSU. After graduating from BGSU, Easterly earned his doctorate in economics at MIT. He worked for 16 years as a research economist at the World Bank. Easterly is a research associate of the National Bureau of Economic Research, and has been Co-Editor of the Journal of Development Economics. He is the author of 69 peer-reviewed academic journal articles.

Easterly credited his father, BGSU and his hometown for the success he has enjoyed as an economist.

“My father’s my role model,” he said. “I really admire enormously what my father accomplished in his career. He had much longer to go than I did. His father died when he was 2 years old. He was in southern West Virginia during the Great Depression when his father died. It really took a heroic effort by his mother, his family and him to climb out of that situation and get a Ph.D. and become a professor at BGSU. It’s much easier for me to go from being a professor’s kid to being a professor. That was the easy part. The hard part was done by my father, and I honestly admire my father for that. And I also give a lot of credit to BGSU for giving my father and me this opportunity. It’s something I’m very grateful for.

“The greatness of America is precisely the small towns of America and Bowling Green is a wonderful example of that. It’s a wonderful small town that provided a life and career for my father, a home and an undergraduate study for me. And for both my father and me its allowed us to have very satisfactory careers that gave us a lot of pleasure, and Bowling Green gets the credit for that.”

Easterly’s books have been translated into 16 languages. He has been invited to speak in dozens of countries, on every continent except Antarctica. He has written columns and book reviews for, among others, the New York Times, Wall Street Journal, Financial Times, New York Review of Books and Washington Post.