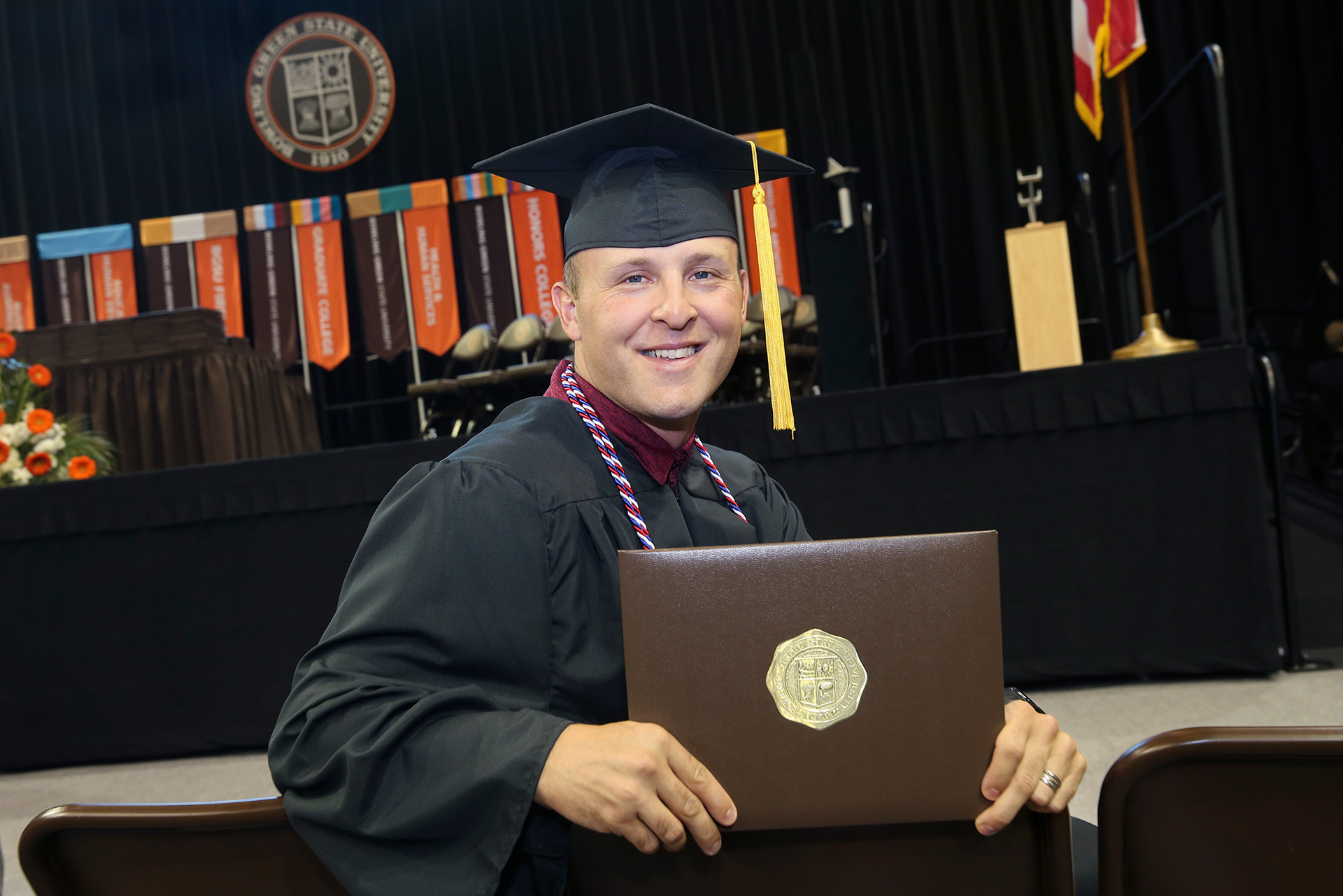 There was no way Gary Schoenhals wasn’t going to walk on the stage, shake Bowling Green State University President Mary Ellen Mazey’s hand and receive his diploma May 5 during commencement.

Schoenhals, a master sergeant in the U.S. Air Force stationed in Guam, had worked too hard for too long to let traveling halfway around the globe  - 7,547 miles! - stop him from achieving his goal in person.

“The two and a half years of hard work taking classes on top of work, family and training for Ironman triathlons and 100-mile endurance runs — yes, I'm crazy — was worth way more to me than receiving a degree in the mail,” said Schoenhals, who earned a Bachelor of Science in Technology through BGSU’s eCampus, which offers flexibility through online classes, six start dates throughout the calendar year and eight-week courses. “I wanted to be in Bowling Green to experience commencement with my fellow graduates and faculty.”

Schoenhals, 36, originally from Buffalo, New York, is a contingency training instructor for the 554th RED HORSE Squadron at Andersen Air Force Base in Guam. During his 18-year career in the U.S. Air Force, he has had many assignments and different responsibilities. Before moving to Guam in September 2016, he was a construction project manager with the 819th RED HORSE Squadron at Malmstrom Air Force Base in Great Falls, Montana, from 2013 to 2016.

As he approaches 20 years in the military, Schoenhals started to think what career opportunities he would have once he became a civilian. He benefited from the Air Force's Associate-to-Baccalaureate program, which allows members to transfer most military experience and classes toward a bachelor's degree at an accredited university.

“The goal for many military members is to make it to the 20-year retirement milestone,” he said. “Although I could retire in two years, a future promotion or potential for another assignment could alter my plans. Every year past 20, we can gain an extra 2.5 percent of retirement pay for the rest of our lives. Most of all, I love serving my country and the Air Force has been very good to my family and me.

“Thinking about which program I wanted to pursue, I began to think about how my future might  look. I have a passion for endurance sports like ultra running, Ironman triathlons and other events. I would like to be a running or triathlon coach after I retire from the Air Force as a supplemental income to my retirement. I felt that the learning design program at BGSU would not only set me up for success in training and development in a civilian company or government organization, but also benefit the development and training of triathletes and runners of all ages and abilities.”

Schoenhals, who started taking online classes at BGSU while he was stationed in Montana, said the learning design program exceeded his expectations. He also thanked the Air Force for making his education at BGSU possible.

“The tremendous support of faculty, professors, advisers and fellow students was truly unique,” he said. “The Air Force paid for 100 percent of my tuition for every class at BGSU, a truly invaluable benefit to our military service.”

Schoenhals got his first brief glimpse of BGSU during a road trip to Buffalo with his three young daughters last year as they stopped in Bowing Green to take some pictures of the campus.

There were more picture perfect moments at commencement as Schoenhals completed his odyssey. He stopped over in Montana a few days before graduation to visit friends and family. His brother, a nuclear missile deputy commander, also is stationed in Montana.

“I now tell my fellow co-workers that if given the opportunity to walk the stage they should - and savor every moment,” he said.

Schoenhals still has his eye on his future - this time, BGSU’s Graduate College - as well as his children’s future.

“It is likely that I will also pursue a master's degree in learning design as well, all completely online, from BGSU,” he said. “I would like my daughters to strive for any goal that they may set for themselves. A chance to attend BGSU would be a great opportunity.”