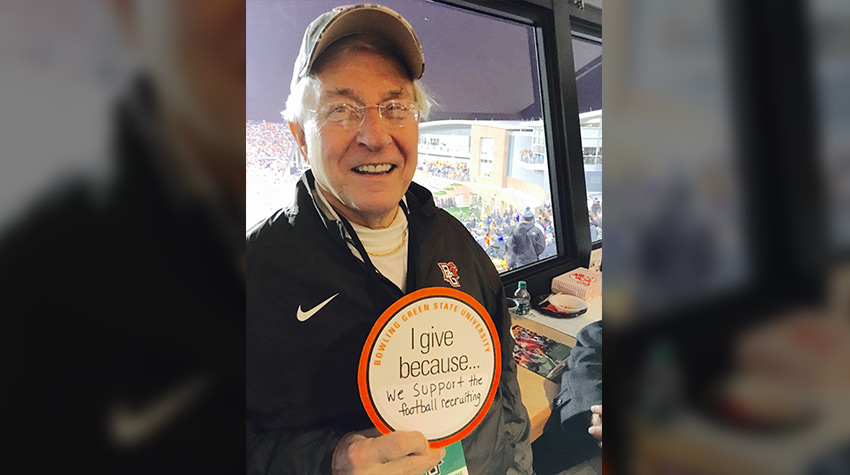 BGSU students benefited from the generosity of Giving Tuesday supporters — a global day of philanthropy following Black Friday and Cyber Monday. 341 donors showed their Falcon pride and gave $105,474.23 within 24 hours. This was BGSU’s second year participating in the annual event. Last year, 164 donors participated raising a total of $31,346.97.

“Giving Tuesday was such a success at BGSU last year and made a large impact on our students. We set our goals even higher this year and added new challenges looking to reach 215 donors in one day. Our alumni and friends really banded together to make a difference at BGSU. Much of the success can be attributed to the many alumni volunteers reaching out an encouraging their connections to be a part of the excitement,” said Rebecca Kocher, assistant vice president of alumni relations and annual giving.

As part of Giving Tuesday many alumni volunteers took a lead role in representing various affinity groups to encourage their peers to take part in the day. Special thanks goes to Kevin Bailey ’99 who made a lead gift to showcase student activities on campus; Iris Jones ’74 who set the tone as a member of the Alumni Board of Directors; Kelsey Music ’15 who encouraged young alumni to participate; and Tom Shanklin ’91 who made a lead gift in honor of our many Greek organizations. BGSU President Dr. Mary Ellen Mazey also showed her support for #BGSUGivingTuesday in kicking off the day by making the first gift shortly after midnight on December 1.

Donors could make a gift to any fund, specific department, program or team that was meaningful to them. BGSU students also took part in the effort. While alumni and friends of the University showed their support through gifts to BGSU, students participated in service opportunities that have a direct impact in Wood County and on the BGSU campus. The BGSU Student Philanthropy Committee partnered with the Office of Service Learning to create various service opportunities.

“It was particularly exciting to see our students step up and donate time and goods to the local community. By 5 p.m. on Giving Tuesday, the students had already donated 265 hours of service through efforts such as:  donating items to create Red Cross Disaster Relief Bags; helping to assemble Care Bags with The Cocoon – a local shelter which provides safety, healing and justice for battered women and their children; donating non-perishable food items to support The Cocoon; and helping Fellow BGSU Falcons who may not have access to food by donating a swipe to Falcon Care,” Kocher said.

To increase the impact of all gifts made on BGSU’s Giving Tuesday, alumni issued challenges to their fellow alumni and friends. J. Robert Sebo ’58, ’13 (Hon.) helped triple the impact for current and future generations of Falcons through his $10,000 challenge gift for Athletics achieved when donors hit the $5,000 mark. Also, Stephanie Wagner ’07, contributed $2,000 after 10 young alumni (graduates from the last 10 years) made a gift in the spirit of Giving Tuesday. Gregg '69, '74 and Darlene '69, '79 DeCrane, not only gave a $2,015 gift, but also pledged $1 for every student service hour completed, up to 500 hours.

Throughout the day, alumni shared their pride and participated in Giving Tuesday by posting “Unselfies” of them with the hashtags #FalconsGive and #BGSUGivingTuesday. Click here to view the Storify summary of the day’s social media conversation.

“Our offices were busy with calls, emails and social media updates from alumni and friends who were eager to be a part of the excitement,” said Kocher.

Kocher expects that final number to increase as checks arrive over the next few days.

Every gift, no matter what size, makes an impact on current and future Falcons. Thank you!