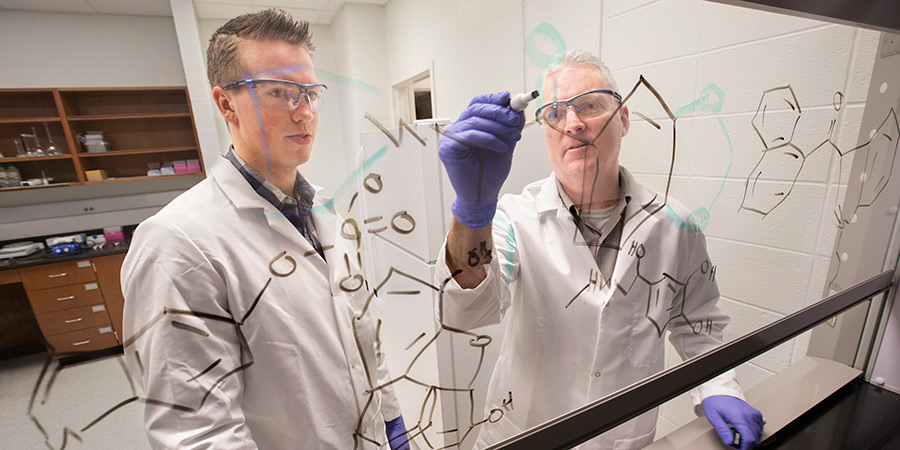 Dr. Jon Sprague and undergraduate neuroscience student Greg Grecco are part of a crusade to protect the public from the harmful effects of synthetic drugs produced in clandestine labs. Their work is not on the street fighting drug crime, but in the laboratory working to understand how the chemical changes made to drugs in clandestine labs change how they affect the body.

Sprague, the director of the Ohio Attorney General’s Center for the Future of Forensic Science at BGSU, is a pharmacologist dedicated to educating future forensic scientists.

His mission at the University is to help develop the forensic science curriculum and conduct research to position the BGSU and the state as leaders in the forensic science industry. At the core of his current research is a proposal to enact a Federal Pharmacophore Act that ultimately will help in the fight against synthetic drugs of abuse. “Pharmacophore” is the term used to define the structural portion or portions of a drug molecule responsible for producing a drug response, Sprague explained.

He was central to Ohio being the first state to enact “The Pharmacophore Rule” (Ohio Administrative Code 4729-11-02) in 2014 that is based on the principles of drug design. Sprague believes the same model is needed at the federal level.

“New chemical entities with variation to the structures are designed and synthesized as part of the legal drug discovery process,” he said. “These modifications are tested for differences in both pharmacological and toxicological effects to ensure safety before approval.”

At issue is that drugs of abuse are also created through the modification of known drugs that provide a desired effect but with the intent to circumvent regulations and without regard for potential toxicity.

“Pharmacophore legislation provides context to the issue and guidance to the question and determination of structural similarity based on the commonality of individual subgroups between scheduled or listed drugs and unlisted drugs of abuse,” Sprague continued.

The work he and Grecco are doing is expected to result in a published paper to support the idea that structurally similar substances should be categorized similarly, as Schedule I or II controlled substances. Current federal law makes it difficult to present drug cases to a jury because of the modifications to drugs being cooked up in clandestine laboratories. The chemistry behind new illicit drugs may or may not be considered “substantially similar,” Sprague said.

He and Grecco spend time looking for similarities in the molecular structures of a variety of existing and new drugs, “trying to stay ahead of clandestine labs,” Sprague said.

He explained it in terms that most people can understand. “When the actor Christian Bales is Batman, he puts on a mask that makes him stronger.”

People who are cooking up new chemistry for drugs use the core structure for the compound but make modifications that could make the drugs stronger.

“We are looking at the drugs from a toxicology perspective,” he added.

Grecco’s interest in the topic stems from seeing the impact clandestine drugs had in his community, and wanting to understand the neuroscience behind drug addiction. As an undergraduate, he has been a quick learner and a focused researcher, Sprague said, praising his work in the lab.

Sprague expects the paper to be published next semester, and hopes the science behind it can provide credence to the need for the Federal Pharmacophore Act. “It is important legislation to help protect society,” he said.