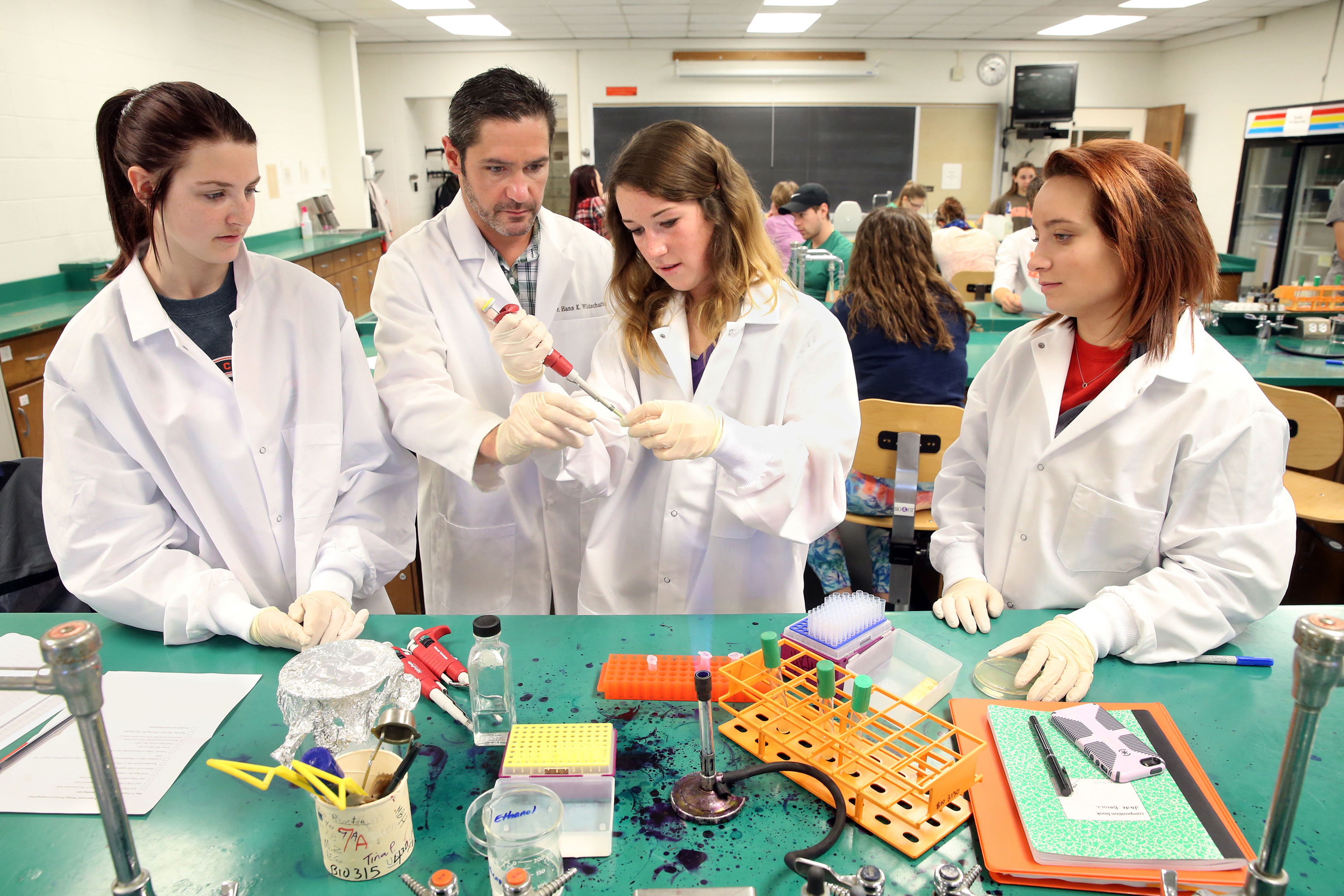 The class is participating in the Small World Initiative, launched in 2012 at Yale University and aimed at discovering new antibiotics to treat the increasingly antibiotic-resistant bacteria threatening health globally. Because of the reluctance on the part of major pharmaceutical companies to develop novel antibiotics due to their low profitability, combined with the emergence of antibiotic resistance among human pathogens, the initiative was created to crowdsource antibiotic discovery by enlisting undergraduates worldwide.

“Over 40,000 undergraduates have participated spanning more than 109 universities,” Wildschutte said. “The students are doing important and real microbiology research.”

Wildschutte revamped the Introduction to Microbiology course and adapted the Small World Initiative this year, making an important shift in the way his class is organized by tying the lecture portion directly to the lab work and the search for bacteria that may kill other, harmful strains.

“The lecture portion of the class and the lab portion were always disconnected and operated independently,” he said. “I decided to make use of the Small World Initiative here at BGSU, which has been going for the last three years and proven a successful teaching strategy.”

The search for “super killer bacteria” is also the focus of Wildschutte’s own research, looking at the marine bacteria Vibrio as a possible source for new antibiotics.

The new class format has proven popular with students in the two course sections.

“This has definitely been my favorite lab class ever,” said Ashley Everett, a sophomore from Toledo majoring in biochemistry. “I’m a pre-dental student, and I know that bacteria causes cavities and infections, so this is relevant to everyone. I like that we’re putting into practice concepts we learn in our lectures.”

Everett said in shadowing a local dentist this year she encountered the problem caused by antibiotic resistance when a patient prematurely stopped a prescribed antibiotic and then developed a resistant infection.

The lab did not begin indoors with test tubes and known bacterial cultures, but instead outside in the dirt, where students collected soil samples to isolate and identify varieties of bacteria including Bacillus and Pseudomonas, which have been shown to produce nearly infinite varieties of diverse compounds including antibiotics that can inhibit human pathogen growth.

The students work only with safe, nonpathogenic strains, and try to develop mutants that will be used to identify genes encoding antibacterial products. Bacteria can be harmful to humans and other species, but they can also be deadly to one another, and that is the focus of their experiments.

“The students first isolate the strains from soil and then identify isolates using polymerase chain reaction and gene sequencing,” Wildschutte said. “These strains are then tested for their ability to inhibit other isolates and then probed for antibiotic discovery.”

“In some of your lab classes, you walk out and you forget what you just learned, but I’ll remember this forever,” said senior Winona Booher, an applied health science major from Perrysburg. “This is the most challenging part of the class,” she said as she and her lab partners tried unsuccessfully to achieve the results they needed in a particular step — an all-too-familiar scenario in real science, Wildschutte said.

“We’re learning the techniques, but it takes patience,” said Kara Callahan, a senior from Wauseon majoring in chemistry. “It reinforces the concepts we learn in lecture.”

On a recent day in the lab, the class was working on a conjugation method, in which they try to mobilize a small DNA molecule called a plasmid from one bacterium to another.

“Bacteria have the ability to exchange genetic material,” said Tiffany Montgomery, a biology major specializing in marine and aquatic biology, from Mansfield, Ohio. “The new bacterium is able to incorporate the new plasmid into its cytoplasm.”

Thomas Hustle, a junior from Lancaster, Ohio, majoring in ecology and conservation biology, said, “The lecture flows into the lab and is completely integrated so that four out of five days, I’m focused on learning this.”

In addition to collaboration with the Small World Initiative, the U.S. Centers for Disease Control and the World Health Organization declared Nov. 16-21 World Antibiotic Awareness Week to heighten consciousness about the global misuse of antibiotics and the evolved resistance of human pathogens to these antibiotic compounds. A number of Wildschutte’s students prepared posters to place on the first floor of the Life Sciences Building to raise awareness of the dangers of overuse of antibiotics and antibacterial products, of the role of unregulated agriculture in pumping antibiotics into animal feed, which makes it way into our food sources, and, in Third World countries, the over-the-counter availability of antibiotics, which contributes to bacterial resistance.

Of great concern is a class of antibiotic-resistant pathogens under the umbrella ESKAPE, which include the well-known MRSA.  The danger was vividly illustrated in Booher’s poster, which showed the devastating effects of one ESKAPE pathogen, Klebsiella, on her own mother’s foot after infection set in following surgery for a bone spur.

On the last day of class, the mutations will be screened and the students in the two course sections will determine whether any new antibiotic encoding genes have been discovered.

“It’s really exciting that they’ve turned to undergraduates to help do this work,” said Jade Borocz, a sophomore from Lakewood, Ohio, majoring in medical lab science. “When we’re working here we’re not really aware of it, but when you stop and think that you’re one of thousands of students all working on this, it’s pretty great.”