Students “Sell” Their Way to Advance to National Sales Competition 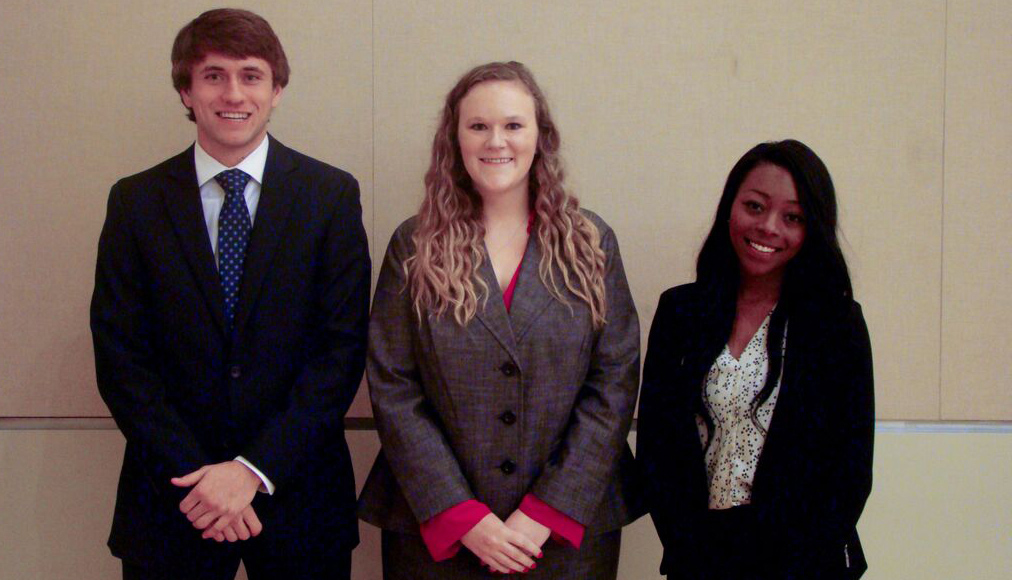 This year's BGSU Sales Competition first-place winner was Phil Rich, with Jessica Miller capturing second place, and Tiana Williams selected third. Tiana will serve as an alternate in case one of the top two can't compete at the national event in April.

Representatives from the sales competition's presenting sponsor, Marathon Petroleum Company, and other sponsoring companies, evaluated the finalists' videos and selected the top three winners. BGSU alumnus Adam Maidment '05, a product manager at Marathon Petroleum, announced the winners at the Sales Awards Banquet and said this year's competition was again a difficult choice.

Nearly 50 students applied to the University's sales competition in September. The applicant pool was narrowed to twelve finalists based on role-playing videos. The finalists recorded a 15-minute role play involving the selling of Blue Rhino propane tanks to a Marathon representative posing as a business buyer.

Here are the other nine students who competed for the title.

The keynote speaker at the Sales Awards Banquet was BGSU alumnus Lance Mitchell '81, president and CEO of Reynolds Consumer Products Inc. He discussed the importance of the sales function in companies, with all departments supporting the sales division, and how everyone uses sales skills in their professional lives. Mitchell also advised students to strike a balance between work and family and to prioritize so family comes first. The BGSU alumnus gave praise for the educational experience he received at his alma mater which has helped him throughout his career.

The BGSU Sales Competition and the Sales Award Banquet were organized by Dr. Greg Rich, associate professor of marketing, and Mr. Mearl Sutton, lecturer in the marketing department. Both are faculty advisors for the student chapter of the American Marketing Association. Andrew Ludwig, last year's BGSU Sales Competition winner and president of AMA, was the MC for the Sales Award Banquet. Ludwig finished among the top 12 in the national competition last spring.