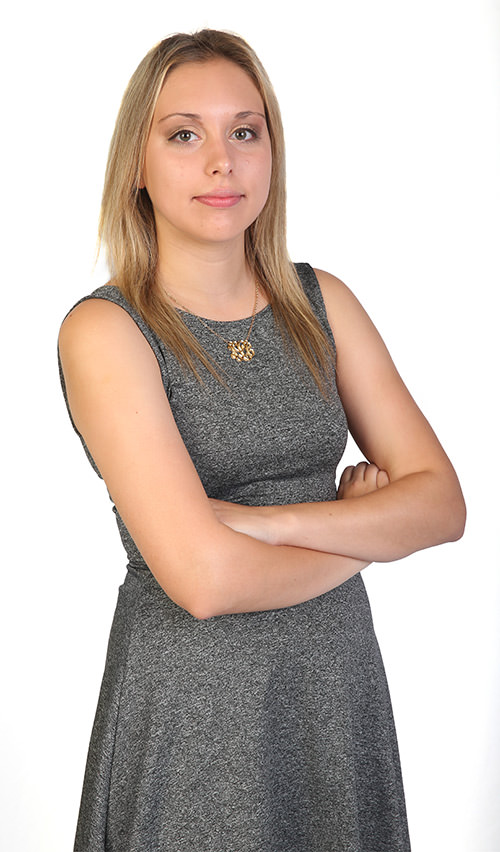 Taylor LaweryImagine being challenged to wear the same article of clothing for 30 days in a row. That is exactly what 140 women in the BGSU Panhellenic community have been doing since Sept. 24 by participating in The One Grey Dress Project.

By making the promise to wear the same grey dress for 30 days, the women are committing to raising awareness about the realities of sex trafficking and oppression that many women and children in the world are facing today.

Participants raise money through a personalized Crowdrise page that they share via social media, email, and other forms of communication. They have the choice of allocating their donations to one of three organizations: The Circle of Sisterhood, The Aruna Project, or The Daughter Project. The Circle of Sisterhood, Panhellenic’s adopted philanthropy, focuses on removing barriers to education for girls in impoverished countries. The Aruna Project is an organization that provides support services and job opportunities in order to free women in the sex trafficking district of Mumbai, India. And, last, The Daughter Project is a Toledo-based organization that provides housing and support for human trafficking victims.

The project was present on BGSU’s campus years ago, but made its comeback in 2014. This was made possible by the hard work of Bre Randolph, the vice president of service on Panhellenic Council at the time.

“During my time as VP, I knew I wanted to do something that would really make a difference,” Randolh explained. “I had heard of the concept when my older sister participated as an undergraduate and thought we should give it another try.”

What the project stands for has deep meaning for Randolph. “I really believe in fighting against human trafficking and violence towards women in general. Since I’m from Toledo, the project was especially important to me, as Toledo has been ranked as the fourth worst sex trafficking city in the nation. This is something that happens right in our backyard. I wanted to get more women involved and knowledgeable about the problem,” she said.

Randolph could not have been happier with the result of the event, as it exceeded all fundraising goals. “Initially I had hoped the project would raise $2,000 and make people more aware of the human trafficking epidemic here and across the world. I was shocked when the project raised over $5,000 in the first year,” she said.

Catherine Weaver“It was heartwarming to learn the project would continue this year, and I was in awe when I learned how it had grown with so many more women participating. I hope this is something that lives on as a legacy of all the good that sororities can do.”

The One Grey Dress Project challenges its participants and all those who are made aware of it to dig deeper into these issues in a way that most causes do not. Its presence on BGSU’s campus for 30 days achieves a great deal of recognition.

“Seeing how this project has made a difference beyond Greek life and has become well-known all around campus has truly been an eye-opening experience,” said Catherine Weaver, a senior and member of Alpha Phi sorority.

“Many of us have been acknowledged by not only just students, but by our teachers and other faculty as well. I think that this shows just how successful we’ve been with spreading the word out to the community about this cause,” she said.

Many participants became creative with their dresses and turned them into scarves or dressed them up with sweaters and boots. Although the women participating are able to wear their dresses in different ways, they still make it a goal to remember that part of the challenge is to feel a small bit of the oppression, isolation and enslavement that human trafficking victims feel by not having any freedom at all.

Taylor Lawery, a junior and member of Sigma Kappa sorority, said she decided to participate in the One Grey Dress Project again this year because of how rewarding the experience was for her the first time. “Figuring out how to wear the dress in different ways, especially when the weather becomes cold and you just want to wear warm, comfy clothes, can be very difficult,” Lowery explained, “but this is precisely what the challenge is all about.”

This year’s goal was to raise $8,000, and the community has already surpassed it by $1,000. The BGSU One Grey Dress Project concluded on campus with the Aruna 5K on Oct. 24.