Picking up garbage, cooking meals, raking leaves and organizing food pantries. Instead of spending their fall break at the beach or with family, some BGSU students traveled to Indianapolis and Detroit to do community service as part of BG Alternative Breaks (bGAB). In Detroit, students worked with two different service groups: Cass Community Social Services and Motor City Blight Busters.

“This has been the coolest thing I’ve ever done. I do a lot of volunteer work, but to get out of my own community and witness how other towns are and how other people live has been a great learning experience,” said Jeanette Grimes, a junior majoring in education. 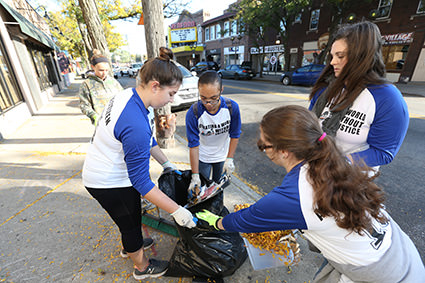 The group of 13 students traveled to Detroit on Oct. 10 and stayed through the end of fall break on Oct. 13. They began their days picking up litter and cleaning up neighborhoods with Motor City Blight Busters, whose motto is “stabilize, revitalize, rebuild.” Jamie Warfield has been with Motor City Blight Busters for 10 years as a lead supervisor. Not only does he help maintain the streets, but he also mentors inner city kids to keep them out of trouble. He says having student volunteers is important for his organization.

“To me, it’s like winning a million dollars,” Warfield said.  “Even just one hour means a lot. To have volunteers come out here and do this, it’s beautiful.”

The bGAB students learned a lot from Warfield. As they walked through the neighborhood surrounding the Motor City Blight Busters’ headquarters on Lahser Road, he shared stories about the abandoned homes. One had windows and doors that were boarded up with steel, “so no one can break in, get hurt or burn the building down,” Warfield explained. Down the street, another house had collapsed leaving only the roof on the ground.

“We actually took that one down ourselves because it was a dangerous and hazardous situation,” he said.

This was senior Ryan Daniels’ second trip to this same neighborhood in Detroit. She wanted to see the progress that Blight Busters had made.

“I saw how what we did really helped make this neighborhood grow,” Daniels said. “We went over a block away and swept up the whole street. By doing that it helps the people feel more safe.”

Senior Al Carroll was the site leader for the Detroit trip. Site leaders go through training on the important components of an alternative break, how to plan and implement the trip of their choice, and how to facilitate meaningful reflection.

“This isn’t a class and we don’t get credit for it, we just want to give back. We also put the application out to anyone who wants to come on the trips with us,” Carroll said.

Junior Kelcie Coffey heard about bGAB through one of her best friends. This fall trip to Detroit was her second alternative break.

“I never really did service before so I thought I may as well give it a try. So I went on a spring break trip and it was the best week of my life. I had a blast and I felt amazing,” Coffey said. 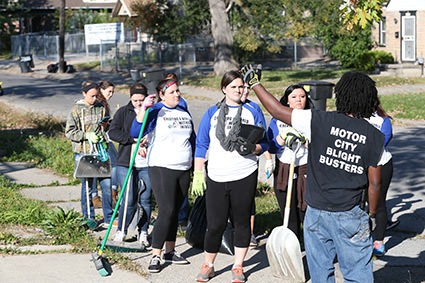 While bGAB welcomes students from all majors, the organization is beneficial to students looking for experience doing community service.

“I’m a social work major so it’s perfect for what I want to do,” said senior Elexus Renner.

“Social justice is huge in the school system and I’m an education major so this definitely applies to what I want to do,” said Grimes.

Graduate student Chris Faulkner was the adviser for this trip, which was his first overnight with students. He described it as being very rewarding.

“Part of the service project includes reflection, helping them think about what they’re seeing and learning and reflect on their experiences in their own lives, how they’ve contributed to a system of oppression and how we can work together in the future to overcome it as a society,” Faulkner said.

After their mornings with Motor City Blight Busters, the students spent their afternoons at Cass Community Social Services, which provides food, housing, health services and job programs for those in need. The students had the opportunity to prepare meals and participate in the job program.

“They have a program where they take old tires and turn them into things like mud mats, flip flops, magnets, coasters and planters,” Carroll said. “Cass helps those experiencing homelessness feel like they have a purpose.”

During their four-day experience in Detroit, the students were able to stay at a church for free.

“We’re eating as little as possible, we’re sleeping on the floor, we’re sleeping in uncomfortable areas, but it definitely connects us to what we’re trying to do and the people we’re helping,” said sophomore Riley Steinboch.

This year, bGAB had two trips planned for the fall and four in the spring. They’re hoping to add more in the future.

The students involved in bGAB pay for the trips themselves but do get some help with fundraising. This year, their group was featured on Falcon Funded, a crowdfunding initiative organized by University Advancement.