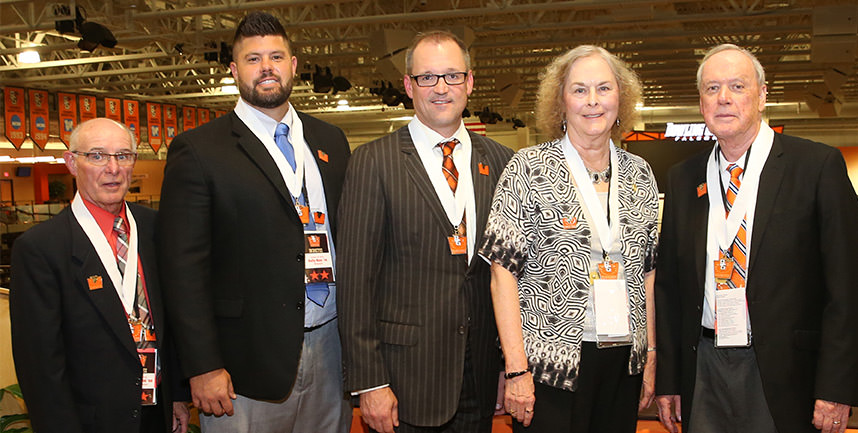 Five individuals were inducted into the Bowling Green Athletics Hall of Fame on Friday, October 9, in a ceremony at the Stroh Center. Dan Bylsma ’92 (Hockey), Kelly Hunt ’14 (Baseball), Bill Jones ’66 and ’68 (Athletic Training), Jim Lessig ’57 and ’67 (Administration) and Marcia Saneholtz ’64 (Basketball, Administration) were honored for their tremendous contributions to Falcon Athletics over the years.

Bylsma, a native of Grand Haven, Mich., played 157 games as a member of the Falcon hockey team from 1988-92. He scored 87 points (37 goals and 50 assists) during his collegiate playing days and was a two-time, first team Central Collegiate Hockey Association All-Academic Team member.

Bylsma spent nine seasons as a player in the NHL, eventually retiring after the 2003-04 season. Following retirement, Bylsma landed his first NHL head-coaching gig with the Pittsburgh Penguins in 2008-09, winning the Stanley Cup that same season. Additionally, he earned the NHL Coach of the Year award for 2010-11, and was also tabbed to lead the U.S. Olympic team in 2014.

“My four years at BGSU as a student and as an athlete were a dream come true,” Bylsma said. “It was instrumental in developing me into the person I am today. It is a huge honor to be elected into the BGSU Athletics Hall of Fame.”

Hunt, a Toledo native, is among the all-time greats in Falcon baseball history. The 2002 Mid-American Conference Player of the Year ranks first in school history in career batting average, total bases, RBI and home runs (tied for first).

During his 2002 breakout season, he hit .402 with 22 home runs, 84 RBI and 69 runs scored, while starting all 54 games for the Falcons. The following year, he hit a remarkable .439 with nine home runs and 61 RBI. Hunt was selected by the Detroit Tigers in the 2003 MLB draft, and played in independent leagues through 2010 where he hit 137 home runs in eight seasons of professional baseball.

“It's a huge honor to be a Hall of Famer at BGSU,” Hunt said. “I have nothing but great memories of all the great guys I had the privilege of playing with. I am thankful to be a Falcon!”

After earning his degrees from BGSU, Jones became the head athletic trainer at Ashland University from 1971-73 before returning to his alma mater. During his tenure, Jones worked for five athletic directors, five football coaches and four University presidents.

“I am deeply appreciative and very humbled to be honored by the Athletics Department and the University,” Jones said. “To have my named picture associated with my former mentors Doyt Perry, Sam Cooper, Al Sawdy and many more is truly unbelievable.”

Lessig, a Canton, Ohio, native, joined the BGSU staff in 1971 and served in a variety of capacities during his tenure. Most"My family and I appreciate so much all the events surrounding the Hall of Fame induction. A special thanks to Chris Kingston and Kit Hughes and the Department of Athletics for making this such a memorable weekend. I have always been proud to be a Falcon, but never more proud than when I received this wonderful honor.” — Jim Lessig ’57, ‘67notably, he was the department’s Director of Athletics from 1978-82 and went on to serve as MAC Commissioner from 1982-90, and was inducted into the MAC Hall of Fame in 2014.

“I feel very fortunate to be joining a Hall of Fame whose members have done so much to create the rich tradition and history of BGSU’s athletic program,” Lessig said. “To be honored by a University that has done so much for my family and myself is very special.”

Saneholtz, a native of Napoleon, Ohio, played basketball at BGSU from 1962-64, but her contributions to college athletics reach far beyond her playing days. Following her time at BGSU, she went on to have a distinguished career as an administrator at Washington State University from 1979-2007.

Saneholtz served as the National Association of College Women Athletic Administrators (NACWAA) president from 1992-93. She was also named NACWAA Administrator of the Year in 1997 and received its Lifetime Achievement Award in 2010. Saneholtz served on numerous committees throughout her tenure and also served two terms as the Pacific 10 Conference vice president. Additionally, she was recognized with the WSU Association of Faculty Women, Samuel H. Smith Leadership Award in 2007.

“I am incredibly humbled and honored,” Saneholtz said. “Playing on the first women’s intercollegiate basketball team in 1962 was meaningful and important to those of us who were fortunate enough to play.  BGSU has always been a special place for me.”