William Primrose Jr., director emeritus of the BGSU Foundation Board of Directors, passed away June 28. He was 94. Primrose was the retired chairman of The Dickey-Grabler Company, a full-service metal stamping facility in Cleveland. He received his bachelor’s degree in marketing research from BGSU in 1942. 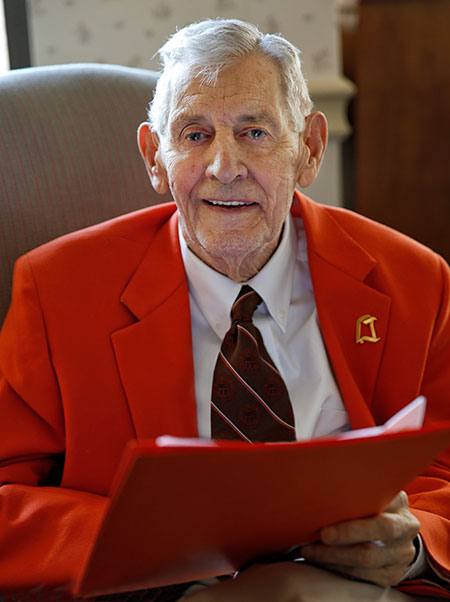 Primrose’s family is longtime supporters of the University. He established the William J. Primrose Scholarship, the William and Mary Catherine Primrose Endowment and the Primrose Family Professorship in Accounting. He has also served on the University Development Council, Alumni Association Board of Directors, and the Dean’s Alumni Advisory Council in the College of Business. In 2010, as part of BGSU’s Centennial Celebration, he was named one of the University’s 100 Most Prominent Alumni.

Primrose met his wife at BGSU and his children are also alumni. William Primrose III ’74 “Bill” is the former two-term chair of the BGSU Board of Trustees.

When asked last year what had inspired their extraordinary level of devotion to the University, Bill and William agreed.

“No matter what we have done for Bowling Green, we both have gotten so much more from BGSU than we could ever give back,” Bill said. “We have so many friendships, so many memories, so many connections – we can’t imagine our lives without Bowling Green,” added William.

“Mr. Primrose was a proud member of the BG family, and BGSU is a better place because of his leadership, commitment and support, “ said President Mary Ellen Mazey. “We extend our sympathies to his family.”