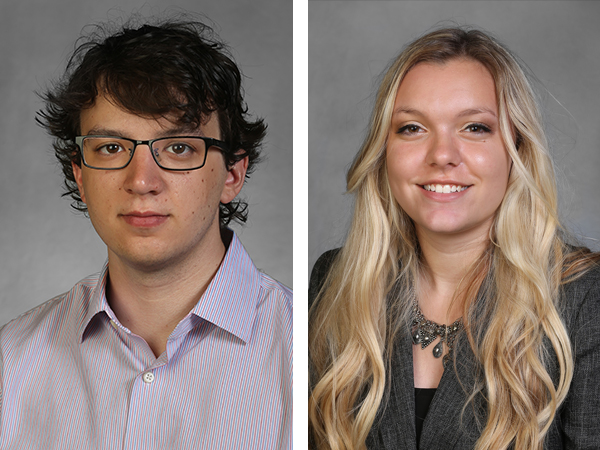 Rolf Ritchie and Megan BurrellOhio Gov. John Kasich has announced the appointment of two student trustees to the BGSU Board of Trustees. Margaret Burrell was named undergraduate representative to the board, and Rolf Ritchie the graduate student representative.

Burrell is a sophomore from Bluffton, Ohio, and a double major studying political science and criminal justice.  Among other co-curricular activities, she is a member of BGSU’s Mock Trial team and Alpha Phi Sorority, as the director of scholarship. She is a member of the 2014 cohort of the President’s Leadership Academy. Burrell works on campus as a legal secretary at the Student Legal Service office. After graduation, she plans to attend law school in hopes of becoming a prosecuting attorney. Her term on the board runs from June 3, 2015, to May 17, 2017.

Ritchie, of Bowling Green, is a doctoral student in the clinical psychology program. He earned his bachelor’s degree from BGSU in psychology in 2012, graduating with honors. Having participated in student government as an undergraduate, he has continued that work as a graduate student, serving as his department’s representative to Graduate Student Senate, and as treasurer and now president of GRADS-ACT, a large graduate student organization in the Department of Psychology. He also serves as BGSU’s representative to the Toledo Area Association of Practicing Psychologists. His term as a trustee runs from May 14, 2015, to May 17, 2016.