Dozens of bikes around campus can now rest comfortably beneath a sustainable roof. Two green-roofed bike shelters have been fully installed outside the Student Recreation Center and the Wolfe Center for the Arts. The shelters are topped with a canopy of living plants. 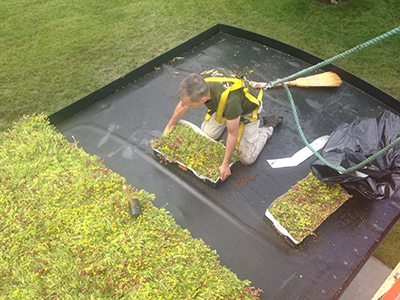 The shelters accommodate 18-20 bicycles each and are composed of strong, structural steel. The support posts are bolted into concrete pads specially created for the bike racks.

BGSU’s Office of Campus Sustainability used a $50,000 grant from the Ohio Environmental Protection Agency to pay for the installation.

The solid roofs hold interlocking “live-roof” trays of succulents and sedums. The racks address two of the EPA’s priorities: reducing storm water runoff, with their green roofs, and reducing emissions, through promoting the use of bicycles, said Nick Hennessy, campus sustainability coordinator. However, they also demonstrate many other advantages to “green roofs” on buildings, such as reduction of the “urban heat island effect,” which extends the life of roofs through protection from the elements, and providing a habitat for pollinating insects.

The grant comes through the Ohio EPA’s Environmental Education Fund. The University’s Student Green Initiatives Fund provided the percentage of matching dollars required by the grant. BGSU and Ohio State University were the only university recipients of grants for the structures.

In addition to beautifying campus, the racks can serve as educational modules for environmental studies and other classes, and raise awareness of using vegetative roofs as a storm water control method, according to the Ohio EPA. Interpretive signs will explain their design and function.

The noted landscape architecture firm MKSK, which is also the company the University is using to design its landscaping master plan, designed the racks. BGSU built a larger “green roof” on a portion of the Oaks Dining Center, a project that was also partially funded by the Student Green Initiatives Fund.