BOWLING GREEN, O.—Since joining Bowling Green State University in 1986, Dr. Craig Vickio has modeled caring and compassion for students in a variety of settings, from counseling sessions to the classroom. Students showed their appreciation for his commitment to them by naming him the 2015 Master Teacher, the highest award for faculty and the only one chosen by students. 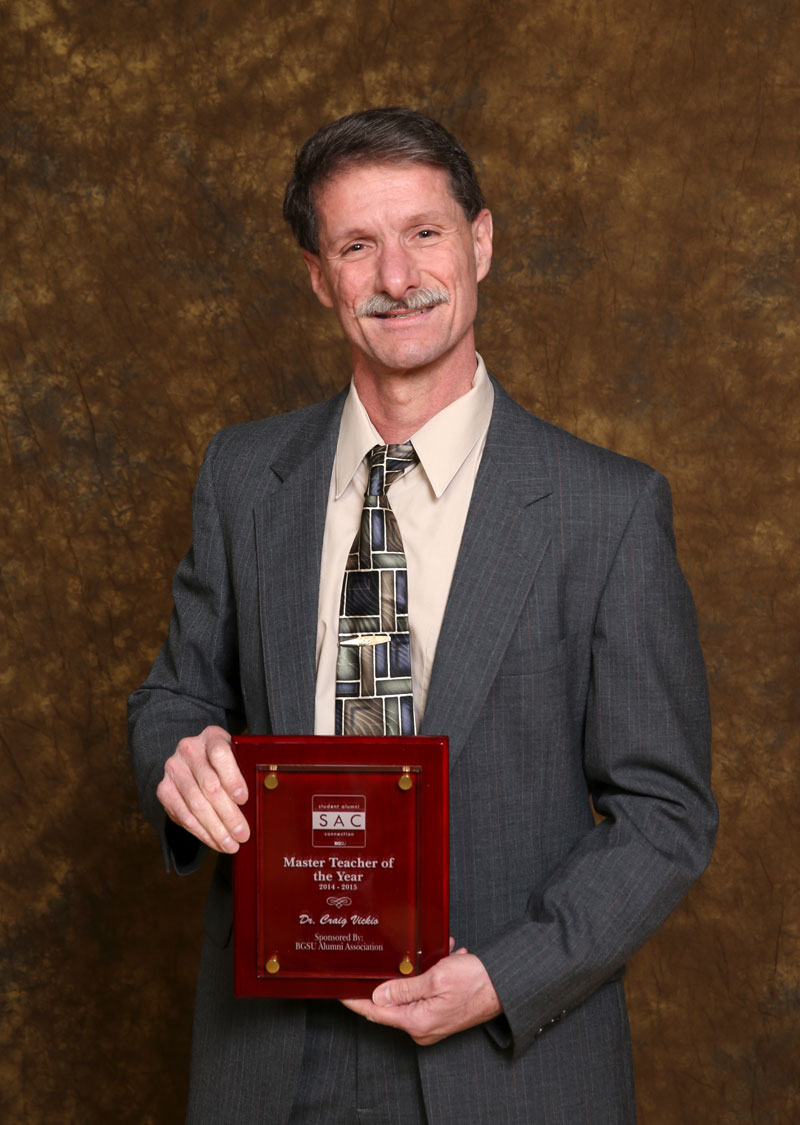 he award was presented to Vickio by Katie Wallrof, vice president of the Student Alumni Connection, at the April 14 Faculty Excellence Awards, along with a $1,000 check. “The award allows undergraduate students the opportunity to recognize a faculty member who positively impacted their lives, and to award them with recognition for all the work they do,” she said. “This award is a way for students to say thank you for providing knowledge, guidance, and skills they will use once they leave BGSU campus.”

A clinical psychologist and adjunct faculty member in the Department of Psychology who earned his master’s and doctoral degrees in clinical psychology from BGSU, Vickio has interacted with thousands of students from diverse backgrounds through serving as their teacher, counselor and adviser over his 28 years of working at the University.

“In his work with students, Dr. Vickio has continually sought to convey the message that he genuinely cares about them and is invested in their personal growth,” Wallrof said. “Central to his teaching philosophy is the belief that students learn best when they are in an environment in which they feel understood, valued and respected.”

Since 1987, Vickio has taught more than 40 classes for the psychology department and the Honors College. After being named the department’s first coordinator of undergraduate internships in 2010, he designed a new internship training course that he has taught six times and has served as the faculty sponsor for more than 80 student interns.

In his work with the Honors College, he has hosted book discussion groups and served as faculty adviser to about 20 students working on their senior honors projects.

As a psychologist in the BGSU Counseling Center, he has provided counseling to more than 1,000 students while also conducting hundreds of workshops, Wallrof said. In addition, Vickio served as the co-chair of the University's Committee on Vision and Values and has published numerous articles aimed at promoting the well-being of university students.

In recognition of his contributions, Vickio has been selected as a finalist for the Student Alumni Connection's Master Teacher Award on three different occasions and is a past recipient of the Vice President for Student Affairs Outstanding Service Award. Earlier in his career, he was named Outstanding Student Affairs Staff Member at BGSU.

He has also been honored by external organizations. In 2011 he received the Hope Award from the Wood County Suicide Prevention Coalition.