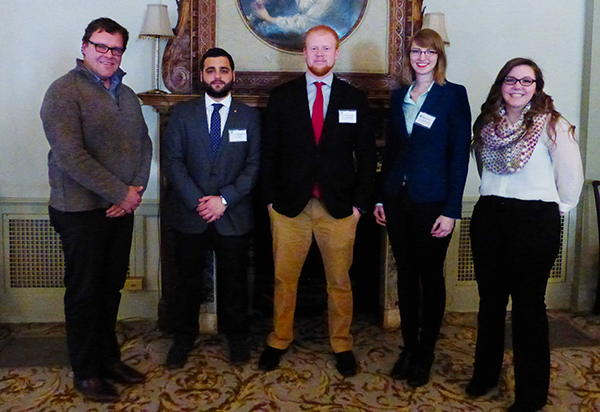 Stefan Fritsch (left) and BGSU Model EU team members (left to right) Jose Muro, Austin Richards, Linda Brandt and Andrea Danziger at the competitionBGSU students successfully participated in the 2015 Model European Union (EU) simulation, hosted annually by the University of Pittsburgh’s European Union Center of Excellence, on Feb. 27 and 28. During the two-day simulation at the 20th Century Club, the BGSU students (representing the U.K., Luxembourg and Latvia) had to discuss and negotiate subjects ranging from the EU’s handling of the Ukraine crisis to Great Britain’s possible retreat from the EU as well as the growing rise of right-wing parties across Europe. The team returned home with a top award for its performances.

According to Dr. Stefan Fritsch, political science department and academic adviser to the group, this high-impact learning experience allows students get a taste of the difficult choices that political decision-makers face as well as the complexity of the negotiating process itself.

“The challenge lies in trying to find compromises that help to solve the problems, yet are acceptable to each country,” he said. Moreover, “the whole exercise provides students with the opportunity to improve a variety of skills, such as oral argumentation, interpersonal communication, negotiation tactics and strategic planning. All of those can later be applied in many professional settings.”

In Fritsch’s opinion, “all our students did an excellent job.”