Juvenile probation officer, high school science teacher, airport worker and mortgage banker are just a few of the titles 2003 alumna Janee Ayers had to take on to make ends meet in the leaner years.

“I was lifting 500 pounds of luggage a day for $9 an hour. And I thought: ‘I have a degree, there is a problem.’ And I knew this was happening to a lot other people, too.”

While her days of loading luggage on the conveyor belt at the Detroit Metropolitan Airport are a far cry from her current position as a Detroit councilwoman, Ayers has held true to her roots, even after climbing to the top of a pool of more than 130 candidates who sought appointment to the high-ranking position.

“I didn’t do anything special, I just told my story and lived within the authenticity of who I am,” Ayers said.

After graduating with a political science degree from BGSU, where she was a member of the NAACP, Hall Council and College Democrats, Ayers had a job offer in Chicago, but chose to head back to Detroit to stay invested in her struggling hometown.

She worked two, sometimes three, jobs to pay the bills and felt the pains of the plunging economy when the school where she was teaching closed its doors in 2007.

But instead of losing herself, Ayers changed her story. 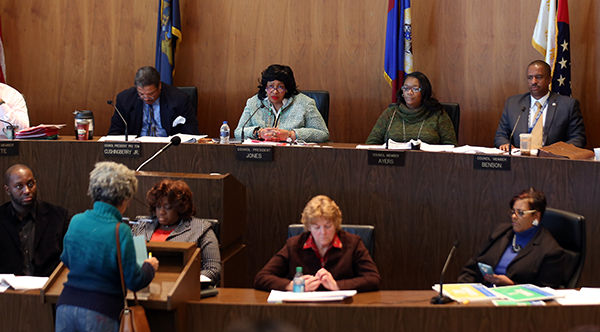 She took a job at MGM Grand Casino. And while Ayers has been around organized labor for much of her life, it was at MGM where she joined the front lines and became part of the casino employees’ union bargaining team. Soon after, she continued her ascent and became recording secretary for Unite Here, which represents members in all areas of Detroit’s hospitality industry. She sat in on bargaining discussions and listened to grievances for multi-million dollar employers in the metro area. She later became a vice president at Metro Detroit AFL-CIO.

When the vacancy for the at-large city council position presented itself, Ayers went after it, feeling confident in her experiences.

“I said I am going to try it out and see what happens. I work in Detroit. I live in Detroit and I feel like I represent what people the people of Detroit are. We are resilient.”

She doesn’t shy away from admitting she is young for such a position, but touts her life experiences as why she ended up where she is.

“I bring a fresh perspective with lots of energy. With Detroit recovering from bankruptcy, we have a lot of young people coming into our city and we need these fresh ideas.”

She credits BGSU for providing a strong base on how to work with people from diverse backgrounds.

“Coming to Bowling Green was an awesome experience. It was definitely eye-opening and it allowed me to successfully interact with people from all backgrounds.

“BGSU was such a fantastic part of my life. I wish I could go back today and do it all again,” she said.

Ayers said she plans to run for council in November 2016.