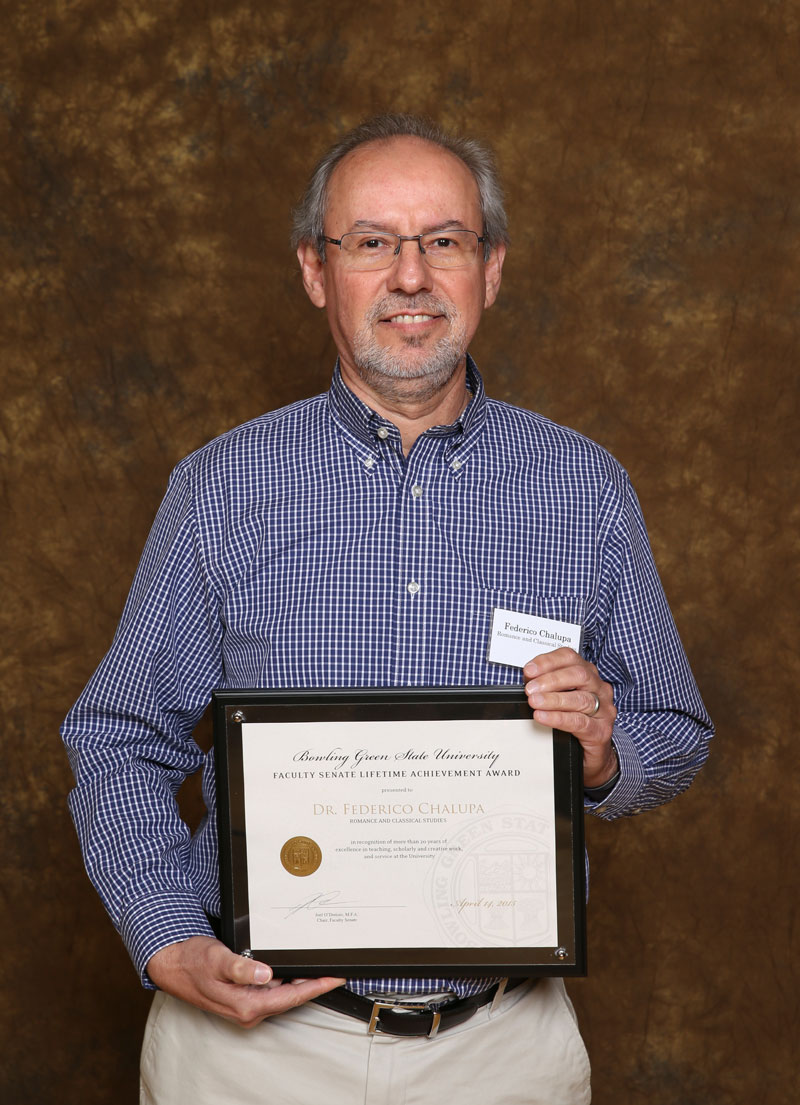 Given by Faculty Senate, the award, along with $1,000, was presented to Chalupa during the April 14 Faculty Excellence ceremony.

In their nomination letter, ROCS faculty and staff said Chalupa has “played an absolutely key role in departmental endeavors for more than two decades.”

An associate professor of romance and classical languages and the current chair of the International Studies Program, Chalupa has taught at BGSU for 25 years, a period in which he has helped expand the Spanish section’s direction to include a central curricular focus on Latin American studies. With colleague Dr. Francisco Cabanillas, he has also built collaborations with other departments including ethnic studies, history, and political science.

Study abroad opportunities with Mexico were initiated and international students recruited with his guidance. As chair of ROCS, from 2002-06, he oversaw further expansion of study abroad programs in Europe (Italy, France and Spain), in Africa (Burkina Faso), and in North America (Mexico and Canada).

“New hires inevitably came to see Dr. Chalupa as a departmental leader and mentor,” his nominators wrote. “He is now, along with Dr. Robin Berg, the department’s most senior member and an extraordinary role model.”

He is also admired by students, who consistently rate his courses as challenging, engaging, rewarding and inspiring. “His pedagogical leadership extends beyond the classroom with vision and leadership for curricular reforms and direction” and participation on numerous committees for master’s theses and projects, honors and doctoral theses.

His leadership of international studies, since 2011, has led to “tremendous expansion and professionalization of the unit, including a dramatic increase in majors (all his advisees), the establishment of its vibrant Web presence, and the foundation of its online journal for undergraduate research.”

He is a productive scholar with a particular emphasis on Andean studies and is widely published.

But perhaps most striking, the nominators said, is the regard in which he is held among colleagues for his character. “He is a leader of convictions. He brings people together to make positive things happen with collective involvement. He has an administrative vision. He began as part of a new movement and steered the department through challenging times, fighting passionately for the interests of faculty and students. He works tirelessly. He is professional, personable and fair.”

Chalupa received his Ph.D. in Spanish language and literature from the University of Arizona.