BOWLING GREEN, O.—Dr. Susan Brown, chair of the Bowling Green State University Department of Sociology, has been an exceptionally productive research scholar, helping to shape the national discourse on the contemporary American family. Her work in the sociology department and as founding co-director of the National Center for Family and Marriage Research (NCFMR) has shed new light on how demographic trends affect American families and earned her a national reputation for cutting-edge, high-quality research in the areas of family demography, sociology and gerontology. 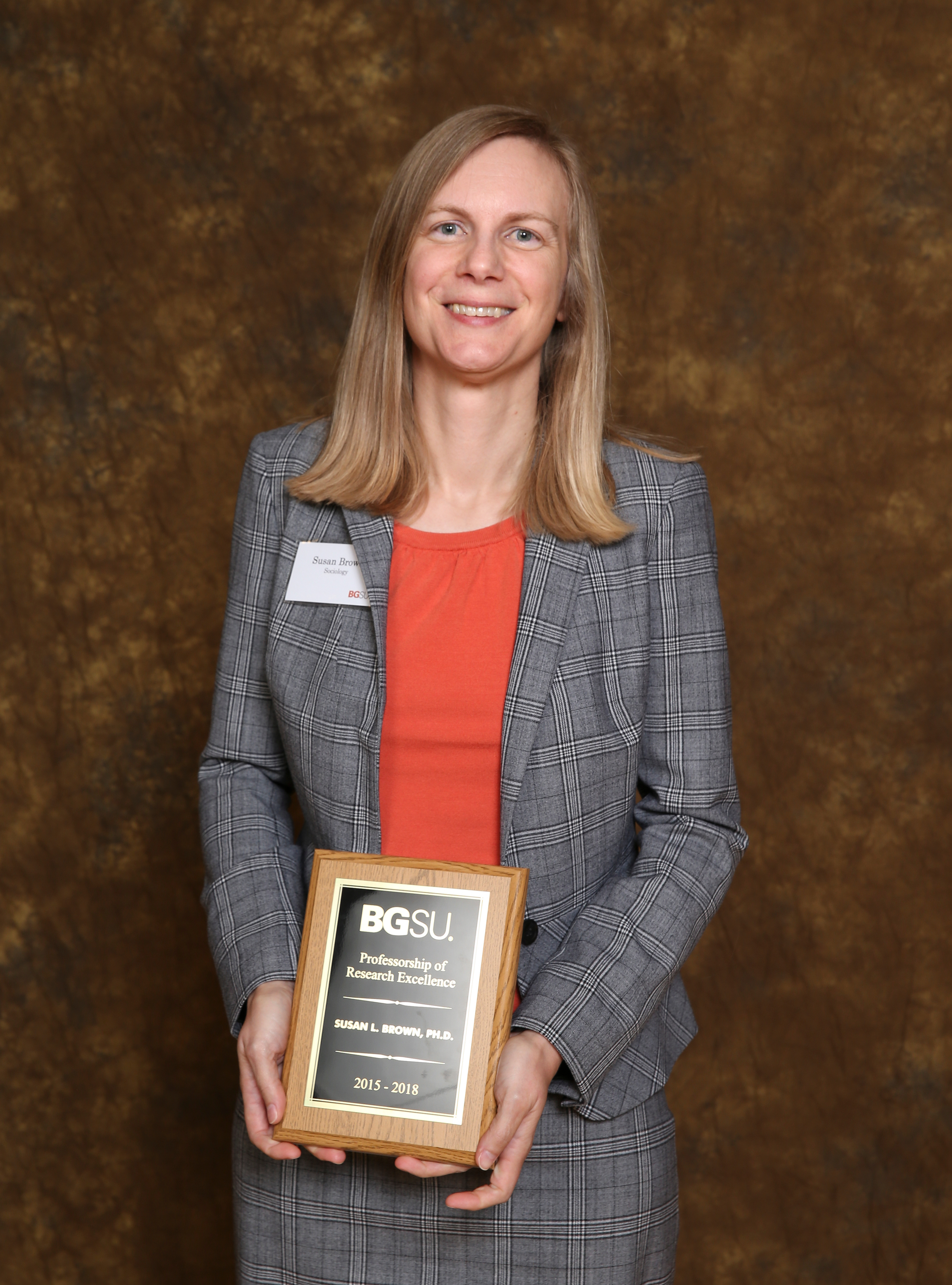 In recognition of her contributions and accomplishments, BGSU has awarded her the title of Professor of Research Excellence, presented at the Faculty Excellence Awards on April 14. The title is conferred upon faculty members who are already full professors and who have established a robust record of research and publication or artistic and creative achievements in their disciplines that has brought national and international recognition. Held for three years, it brings a $5,000 yearly stipend to the recipient, including $2,000 to be used toward professional development.

Brown and NCFMR co-founder Distinguished Research Professor Wendy Manning were instrumental in securing funding for the center, the only federally supported research center on family and demographics. Its work has attracted other scholars, undergraduate and graduate students and postdoctoral fellows. Brown’s numerous collaborations with colleagues and students have resulted in publications and awards, and many of her students have gone on to prestigious careers of their own.

The relevance of their work has been illustrated by the number of times Brown has been invited to appear on national television and in print as a commentator on the recent transformations in how families are organized and how people today are living their lives.

Recognized as a leader in the field, Brown has been elected to serve on the board of the Population Association of America and the council of the American Sociology Association Family Section. “Her excellent reputation is reflected in her current service on the NIH (National Institutes of Health) Population Science Committee Study Section,” according to colleagues Manning and Drs. Monica Longmore and Kei Nomaguchi. “This is an honor only asked of the best in the field. She is chair of the committee, which is awarded only to the most elite members.”

She also has service on the editorial boards of leading journals.

“Susan is an all-around dynamic leader in several academic disciplines and a faculty leader at BGSU,” her nominators said.

Brown’s record of publication is strong both in quantity and quality. She has published 37 refereed journal articles, 25 as lead author, and in the last five years 18 papers are in print or forthcoming. She has been published in the top journals in her field and numerous other leading sociology outlets. Her contributions to aging, marriage and cohabitation research have been influential, and the book “Early Adulthood in a Family Context,” which she co-edited, has brought attention to this increasingly important stage of life, her nominators noted. The book is the outgrowth of a national conference Brown co-organized and fills an important gap in the literature.

Her groundbreaking work with BGSU sociologist Dr. I-Fen Lin on “gray divorce” and people starting over romantically later in life has revealed important changes taking place in the life courses of Americans, and her findings in the area of child well-being provide insight that should be helpful to policy makers.

She and her colleagues have received over $5 million in grant funding for research, from such top sources as the National Institutes of Health and the Department of Health and Human Services.

Brown has won numerous national and professional awards for her work, whose influence extends even farther by being cited by other scholars — over 3,000 times, with nine articles cited over 100 times each, according to Google Scholar.

Perhaps even more importantly, Manning said, Brown takes a great amount of time to translate her scholarly work into layman’s terms in order to share it with broader audiences. This has resulted in great recognition for BGSU in print, television and radio. She has been interviewed and her findings on divorce, cohabitation and marriage discussed in top national media outlets such as the Wall Street Journal, the New York Times, the Washington Post, USA Today, the NBC “Today Show” and “Nightly News,” on CNN and on NPR.

Professor Brown is a productive scholar and a respected leader at BGSU and within her discipline,” said Dr. Raymond Craig, dean of the College of Arts and Sciences.