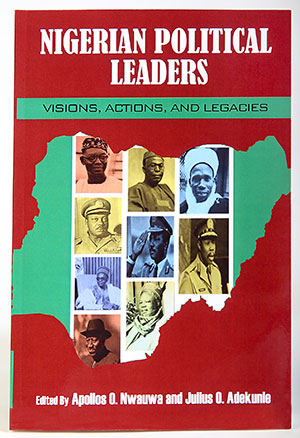 Nigeria has a history of inept and corrupt leadership exacerbated by ethnic, religious and sectional biases. As the country’s recent election has come to a close, ushering in a new leadership, a book co-edited by Dr. Apollos O. Nwauwa, history and director of the Africana studies program, examines 50-plus years of the country’s leaders.

“Nigerian Political Leaders: Visions, Actions and Legacies,” which Nwauwa co-edited with Julius O. Adekunle, offers a retrospective of the country’s past political leaders and their legacies — good and bad. None of the current leaders are evaluated in this book, which is published by Goldline and Jacobs Publishing and available on Amazon.

The book was four years in the making, according to Nwauwa. Twenty seasoned scholars from the U.S. and Nigeria collaborated on the research and writings about the actions of Nigerian politicians. The various scholars selected respective leaders for research evaluation from a list of military and civilian leaders who were in powerful positions between 1962 and 2010.

“No such anthology on Nigerian political leaders exists,” Nwauwa said, “yet it was important to point out that leadership problems and corruption have hindered the institutionalization of a viable democratic tradition in Nigeria.

“Leadership crises have remained the bane of Nigerian politics since the country gained its political independence from Britain in 1960.”

Ade Adefuye, ambassador to the Embassy of the Federal Republic of Nigeria in Washington, D.C., who wrote the forward for the book, pointed out, “The poor in Nigeria are languishing in abject poverty and hunger, squalor, disease and destitution. Nigerian leaders are only after working out strategies on how to enrich and perpetuate themselves in office.”

Nigeria has gone through turmoil, Nwauwa explained. “The book provides a look at what has happened and why successive Nigerian governments have failed to provide purposeful and effective leadership for the people.

“There has been a mix of fairly good and mostly very bad leaders. Some had visions but couldn’t translate them into action.”

There were good leaders who had clear vision, but whose legacies were thwarted by others, he said.

The book is divided into two sections: civilian leaders before and after independence and the military and political leadership. The book has “blazed the trail, but it is not exhaustive,” Nwauwa said. Leaders analyzed include Nnamdi Azikiwe, “High Priest of National Unity,” and Abubakar Tafawa Balewa,”A Legacy of Leadership and Good Governance,” to Olusegun Obasanjo, “Mandate and the Parable of Paradise Lost,” and Sanni Abacha, “The Years of ‘Long Knives.’”

This is the third book Nwauwa has edited in the past four years. Previous books included “Against All Odds” and “Between Tradition and Change.”