CNN host and correspondent to give Currier Lecture 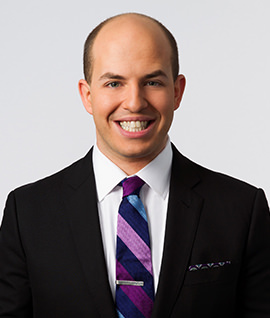 CNN senior media correspondent and “Reliable Sources” host Brian Stelter will visit the University March 23 and 24 to visit with journalism and public relations students and deliver the 2015 Florence and Jesse Currier lecture.

His talk will begin at 7 p.m. March 24 in the Bowen-Thompson Student Union Theater. It is free and open to the public.

“I’m looking forward to speaking with lots of students,” said Stelter, who in 2013 published the New York Times bestseller “Top of the Morning: Inside the Cutthroat World of Morning TV.”

On “Reliable Sources,” Stelter examines the top media stories each week. He also reports and writes about media for CNN/US, CNN International, CNN.com and CNNMoney.

Stelter, 29, joined CNN full time in November 2013 from the New York Times, where he had been a media reporter since 2007, having been hired by the respected newspaper immediately after graduating from college.

“I knew upon meeting Brian in his freshman year that he was driven toward success,” said Dr. Kimberly Lauffer, journalism and public relations at BGSU and formerly an associate professor of journalism and new media at Towson University. “It wasn’t just the blog he created at 18; it was the maturity he displayed in gaining the trust of news industry insiders and using the information they provided in a responsible way.”

As a freshman in college, Stelter created TVNewser, a blog about the TV news industry. He sold it six months later to MediaBistro.com but continued to write and edit for the blog as he completed his college career.

He also served as the editor-in-chief of the student newspaper, The Towerlight, and was instrumental in helping it become truly independent of the university. He now serves as a member of the board of Baltimore Student Media, a nonprofit organization that publishes the independent newspaper.

Stelter graduated from Towson in 2007 with a bachelor’s degree in mass communication, focusing on journalism and new media.

His BGSU talk is funded by the Florence and Jesse Currier Endowment, which supports seminars and faculty research projects relevant to the journalism department.