When students decide they don’t want history class to end, their teacher must be doing something right.

That’s the case at Waynesfield-Goshen Schools, a small K-12 school system in rural Ohio where Joe Foster teachers American History, World History, Government and Economics, Civil War, and Defining Moments in History. With a total enrollment of just 550 students, every high school student has Foster for at least one class and often leaves wanting more.

Foster, who earned his undergraduate degree in political science in 1989 and his master’s degree in public administration in 1994 from BGSU, most likely gets his passion for history from his father.

“My dad is quite the history buff,” said Foster. “I grew up listening to his stories and the lessons we could draw from them. Napoleon and Caesar were my bedtime stories.”

“I will always treasure the trips our family made to places like Schoenbrunn Village and the Smithsonian.”

Today, Foster returns that favor by taking his students to the Civil War Days in Hartford City, Ind., a highlight of their school year.

“Civil War Days make history real to the students,” he says. “They can touch, feel, and hear the things that happened during that time.”

The program includes reenactments, cooking, music, and, naturally, an appearance by “Abe Lincoln.” The students get a firsthand look at Civil War life through artillery drills, medical training school demonstrations, even the role of the undertaker.
Foster, who participates with his wife in historical reenactments throughout Ohio, said students are fascinated at these events. 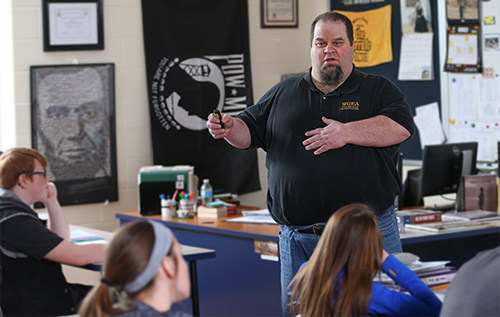 “Most students have never been to a reenactment, so they have just as many questions about the behind-the-scenes logistics as they do the history. The most common question I get is ‘How do you know when to die?’”

Teaching wasn’t in Foster’s initial career plans, but the decision to change professions has satisfied him as much as it has his students.

“I had been out of school for about four years when I decided to make a career change,” he explained. “History had always been my passion growing up. Becoming a history teacher seemed the best way to do that every day.

“When I went back to school to get my teacher certification and took a few more history classes, I not only greatly enjoyed them, but was thoroughly challenged by how much I had to learn and understand.”

While Foster uses some traditional lecturing in his class, he also uses whatever methods he can to help students see people in history through a personal perspective.

“No matter what historical period we are studying, we talk about more than just historical facts and dates,” he said. “If we are studying the Cuban Missile Crisis, we look at what music was popular at that time, what the fashion was, what movies were popular. The more personal you can make history, the more students understand its impact.

“If they can understand the paranoia and fear that occurred with Communism during the Cold War, they will have a better understanding of what is happening in the world today, with issues like ISIS.”

Foster also has his students choose a person from history and then do a presentation in first person as that historical figure. On any given day, you may find his students using Microsoft Moviemaker to recreate propaganda movies common during the Cold War, or using 3-D glasses to view historical photography plates of hundreds of Civil War images.

Foster’s focus on making history interesting and relevant is most likely what prompted a special request from his students in 2010.

“The semester was coming to a close and students in my Civil War class asked what we could do to keep going with the topic,” Foster explained. “We brainstormed and came up with the idea of a club for the Civil War.”

“But we didn’t want it to be just a typical high school social club,” he said. We wanted to do something. So we decided to do service.”

The student club, known as the “Civil War Brigade,” focuses its efforts on those who have served our country in uniform. They also help promote education and preservation of the Civil War.

“We have taken trips to Gettysburg and local reenactments,” Foster said. “We host a dinner for area veterans on Veterans Day and have provided care packages for soldiers in Afghanistan.”

“The Civil War is a relatively new passion for me,” he explained.  “It probably began around 2000 when I watched the movie ‘Gettysburg’ and read the novel ‘The Killer Angels’ for the first time.

“I had seen several clips of the movie, but never watched it in its entirety. I was truly captivated by how history was told through the stories of common individuals rather than grand events. I think that is what captivates me the most about the Civil War and history in general: the stories of individuals.

“Since the Civil War is truly an all-American affair, it really emphasizes the stories of people like us. It’s hard to find a town in Ohio without some type of Civil War marker or graves. It truly is our story.”