A new study by BGSU researchers is providing a rare look into the lives of adolescents throughout their high school years. College of Education and Human Development faculty Drs. Margaret Zoller Booth, also associate dean of the Graduate College; Christopher Frey, leadership and policy studies; and Jean Gerard, human development and family studies, surveyed a thousand Fremont, Ohio, students in grades 7-10 twice a year for four years, beginning in fall 2009. 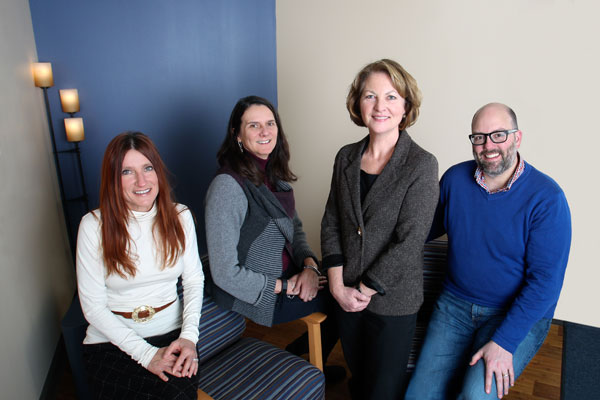 Partners in the long-term study of Fremont youth were (left to right) Jean Gerard, Wendy Manning, Margaret Booth and Christopher Frey.The team, now including sociologist Dr. Wendy Manning, co-director of BGSU’s National Center for Marriage and Family Research and Center for Family and Demographic Research (CFDR), is making the resulting trove of data from the project, “Adolescent Academic Context Study,” available to other BGSU faculty and graduate students to analyze from their varied perspectives. About 25 are already participating, and the study is “still joinable,” Booth said.

A recent grant from the Spencer Foundation, one of the country’s preeminent educational research organizations, is helping support analysis of the enormous amount of data the study yielded. The CFDR has also contributed its resources to preparing the data in a usable form.

“This has been an interdisciplinary project since the beginning, because kids’ lives are by nature interdisciplinary,” said Booth, a specialist in educational psychology and now associate dean of the Graduate College. “We wanted to look at the economic and cultural context of learning, to see how the school and family environment influences students’ learning and development into early adulthood.”

The Fremont district was “wonderful to work with,” the researchers agreed. The superintendent, Dr. Traci McCaudy, gave her full support and the teachers made sure the students knew their participation was important, Booth said. The BGSU group will host a daylong conference on June 10 for district teachers and administrators to share the initial survey results and the papers that have been written about them.

“Teachers have invested considerable time in this project,” Gerard said. “We are now at the point of sharing our results with them, and identifying points of intervention.”

"This has been a wonderful partnership with Bowling Green State University,” McCaudy said. “We are very excited to see the research results so that the district can have further discussions about those findings and their implications for student achievement."

The surveys’ measures of student perceptions can be correlated with the state of Ohio achievement data that has also been collected as part of the study. “Having a greater understanding of the educational context of these adolescents’ lives is essential to understanding their academic success,” Booth said.

Fremont was an ideal location for the survey. “It’s a microcosm of the U.S.,” Booth said. Unlike much of small-town Ohio, its population is ethnically diverse, with a particularly large segment of mixed-race citizens. Like most school districts, however, its teachers are predominantly white. Without a primary major employer, residents tend to work in the schools, hospital, local government and light industry, Frey said.

Since the survey began in the height of the recession, “it will be interesting to look across it to see if it is changing as the economy changes,” he noted.

Booth is particularly interested in questions of ethnic identity — “what students identify as their ‘official’ classification,” she said. “We know that adolescence is a time of identity development, which generally becomes stronger during that time. I’m looking at the difference between boys’ and girls’ identification with their ethnic backgrounds and the relationship between ethnicity and school climate.”

For Gerard, the study has already yielded three collaborative papers, one that focuses on risk and protective factors in the social context as a predictor of mental health outcomes. She is looking at how feelings of connectedness at school and school climate correlate with the occurrence of students’ having conduct problems or feeling depressed, as well as the role hope plays as a protective factor when students perceive parental or school support is lacking.

“If kids don’t have a lot of hope or plans or optimism, they’re more likely to engage in problematic behavior, feeling they have nothing to lose. A sense of hopefulness is especially meaningful for girls and minority youth,” Gerard said.

Frey, a historian of education, approaches the study a bit differently. He is interested in the relationship between the community and school across time, and what role the school plays in students’ perception of their community as a place to stay or a place to leave. The results could have important implications for policy makers seeking to halt what is commonly — though perhaps erroneously — thought of as Ohio’s “brain drain,” Frey said.

“Since 2009, the seniors in our study have seen so many changes,” Booth observed, both in the economic fortunes of their families and town as well as the growing emphasis on assessment and “No Child Left Behind” in school. “It will be interesting to see how they enter adulthood.”

The team hopes to use the study as the basis for further follow-up of the participants. A major benefit of the Spencer Foundation is its support for an additional data collection to bridge students’ high school experiences with their early adulthood — did they go on to higher education, receive social services, become employed, get married?

“We’d like to follow them into early adulthood linking early measures throughout high school to future educational and life outcomes,” Gerard said.