‘On the Big Rivers’ traces voyage of discovery 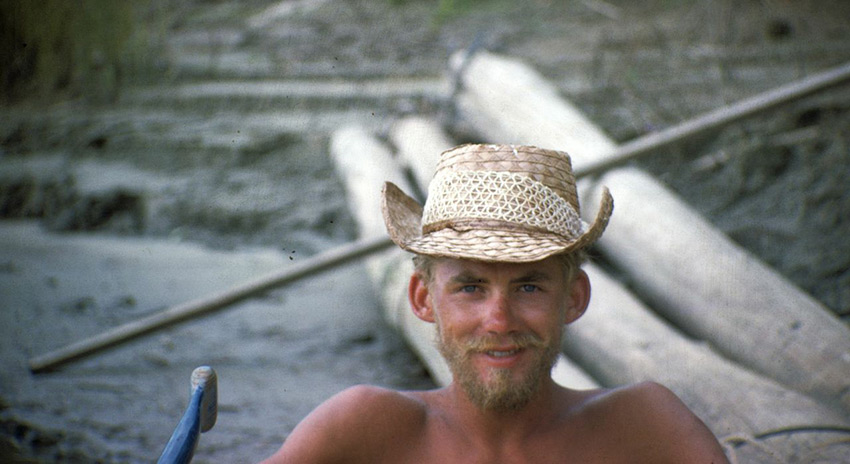 In the summer of 1962, two young men set out on a 3,800-mile canoe trip that was to become a “voyage of discovery, friendship and initiation into manhood,” as Dr. Richard Messer described his journey down the Missouri and Mississippi rivers with his friend Jerry Sanders. Both aspiring writers, they recorded their impressions in journals with the intention of producing a book about their experience. The journals, however, remained largely untouched until recently.

“About the 50th anniversary of our trip, we got together in Jerry’s cabin in the mountains outside Laramie (Wyo.),” Messer said. From that reunion came the book they had planned so long ago, blending the enthusiasm of youth with the perspective of age. Messer is a published poet and BGSU professor emeritus of English, and Sanders is retired from school teaching and a life of traveling the world.

“On the Big Rivers, from Three Forks, Montana, to New Orleans, Louisiana” will be published by Genoa House Press this month. Along with tracing their voyage, it offers a first-person look into an America long gone. It is also a vivid look at some aspects of American life that are not mourned, such as the overt racism that still existed in the early ’60s.

There was a “new energy in the country then,” Messer said, with the second world war and Korean War over and social movements on the rise. For the two 23-year-olds, that summer was a time of freedom before taking the next step in their lives.

Setting off during what was to be the rainiest summer in a decade, with limited provisions and no sunscreen, GPS (Sanders used geological survey maps from the Army Corps of Engineers) or cellphones, and, in Messer’s case, little experience canoeing, the two soon discovered how frighteningly powerful nature can be when, on only their third day out, they learned why the Upper Missouri is called “Old Misery.”

Leaving the river to cross the flat water of the lake created by the Canyon Ferry Dam, they were swept up in a violent rainstorm and vicious winds that struck up waves high enough to capsize the canoe if the paddlers hit them wrong. After harrowing hours of paddling with all their might, they finally made it to shore, totally spent and surprised to be alive. And so began their trip down the two greatest rivers in America, a voyage Messer believes they may have been the first to make completely by canoe. “It was done in the true ‘voyageur’ spirit,” Messer said.

After another “gully washer” rain in Montana while they slept one night, “the canoe said adiós,” Messer said. Resigned to having to quit their journey after a week of tromping through the “gumbo mud,” Messer remembered, with the help of a friendly game warden they finally found it at a rancher’s sod-roofed house, where he had repurposed it as a hog trough — an unexpected gift from the river.

“Despite all that, we never turned over the canoe,” Messer mused.

Like their intrepid forebears Lewis and Clark, they were seeing a landscape new to them and overwhelming in its beauty. “The Milky Way was pristine and startling,” Messer said. “We spent many nights listening to the coyotes.” Animals abounded and once, “a red fox called in” at their campsite, a more welcome visitor than the rattlesnake and the “line in the sand” that turned out to be a water moccasin.

“On the Big Rivers” contains photos from the trip showing two tanned and muscular young men, Sanders always with a pipe clenched between his teeth, the bond of friendship evident between them. From the tentative sweetness of the photo of them with their girlfriends before embarking to the later shots of the grizzled and triumphant duo can be seen some of their internal coming of age.

“By the time we reached New Orleans, I knew I’d been opened up and changed,” Messer said. “There’d been a question about marriage and the trip confirmed my commitment to get married. I’m glad I did that.”

The upper Missouri included 15 dams they had to portage the boat over, often a climb and trek of many miles. They passed through South and North Dakota, and on down to Iowa. “It was spooky at times, passing by abandoned ranch houses, and through tribal lands and the sites of massacres,” Messer said.

“The trip changed character when we reached Sioux City, Iowa,” he said. “From there on down to St. Louis, the Missiouri was more like an industrialized canal with dikes and levies. It had been channelized and had a more mercantile feel. ”

At Lexington, Mo., “with only 800 miles to go,” he said, they met with two other young canoeists, who completed the trip to New Orleans with them. After months of being one another’s sole companions, they welcomed the fresh company and conversation.

After crossing the Chain of Locks lock above St. Louis, the voyageurs visited the historic river towns along the Mississippi, their sunburned, mosquito-bitten, bearded and ragged appearance eliciting questioning looks and comments from those they met, furthering heightening their sense of being observers in a strange land.

As he and Sanders traversed the country, they also seemed to be traveling across cultural eras, Messer recalled. Having grown up in the West, where he met few black people, “I thought the Civil War was over,” he said. “I hadn’t thought much about racial prejudice, but as we got farther south we were startled to find that Jim Crow was alive and well. It started at a café in Vicksburg, when we realized that all the white people were on one side of the cafe and all the black people were partitioned off on the other side.”

Not knowing the rules, they naively tried to do their laundry in “coloreds only” laundromat, only to be pointed politely but firmly down the street. They also heard comments about “Injun country” when they told curious people where they came from.

“I tried to reflect in the book the development of human rights in America through the settlement of the West,” Messer noted. From the tragic story of the Native Americans to the struggle of blacks, that history was manifest to the travelers, and a sad lesson that is still being learned.

After a celebratory week in New Orleans, the penniless foursome finally split up to make their ways back to their lives and what awaited them — which, in Messer’s case, proved to be even more daunting than what the rivers presented. The lessons he learned on that voyage about courage, perseverance and mental strength, undoubtedly played a role in helping him navigate the rivers of life.